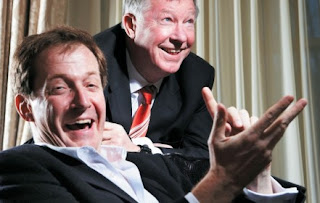 Firstly my kind thanks go to Soccerpro.com for kindly donating the pricely sum of one Arsenal shirt as the prize to this slightly bizarre and random competition of my own creation. The full range of Arsenal merchandise available at Soccerpro.com can be seen here, if you are lucky enough to win then they may even give you something other than the standard home shirt if you ask them really nicely and promise to tell all your friends of the excellent service that Soccerpro offers, it really is quite a brilliant service, great merchandise at such reasonable prices (Stop the shameless plugging you twat. Ed.)

To enter the competition either send me (1979gooner@gmail.com) a humorous poem or send me a caption to the above photograph of the esteemed Alastair Campbell and the lovely Sir Alex Ferguson. Whichever I find the most amusing shall win, the leading poem so far is this sterling little effort about the mighty Emmanuel Eboue:

"Here’s a little Eboue themed version of the Sinatra classic – “My Way”. I like to call it “The Eb-Way”;

And now, Arshavin’s here;
Eboue may face the final curtain.
But again, the crowd will cheer,
They’ve only come to see Eboue

Eboue dived, in gay Paris.
He even scored at Highbury;
And more, much more than this,
He did it The Eb-Way.

Regrets, Eboue’s had a few;
But in Le Boss, he found a partner.
So when the Gooners boo,
He’ll always be Arsene’s Pass Master.

Eboue danced some crazy dance;
Fell over on so many touchlines,
But more, much more than this,
He did it The Eb-Way.

Yes, there were times, Im sure you knew
The Emirates crowd were heard to boo.
They never want Eboue to shoot,
So he put on his Tigger-suit;
And did it the Eb-Way.

When taken off, against Wigan,
And now, the tears have dried,
Eboue’s back – of this we’re certain .

To think, they say he’s cack;
And others would have turned their back,,
But not - not Eboue,
he did it the Eb-Way.

Cos if you take, my Eboue away
And for the Arse he’ll never play
To do the things only Eboues do;
To hear the cheers, when all are boos.
The record shows he took the blows -
And did it the Eb-Way!"
Posted by 1979gooner at 13:46

"I just caught Rooney and Ronaldo roasting your granny."

"Laugh if you're a cunt"

"Campebell: as you can see, i cupped ronaldo with my right hand, and then stuck my finger up his arse.."

Campbell:"So that's the FA & The labour Party. What other English insitutions can we reduce to a laughing stock?"

Ferguson:"Ach, I even got those stupid Brits to knight me for the pleasure. And got them paying the wages of Darren Fletcher, thus reducing the Scottish benefits burden".

I normally quite like new kit previews, but this one scars me....

It would be helped slightly if they made ManU wear this at the Emiratrs though;

Yeah well, you're a loser. SO put that in your pipe and smoke it.

The green kit is awful. Only Goalies and referees can wear green - that's a basic principle of thermodynamics.