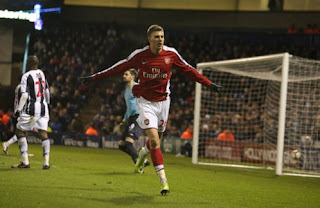 Morning all. I can't really write a match report on last night's game, as I didn't see it, but frankly, the result is far more important than the performance at this stage of the season.

From the limited goal highlights I have seen, its nice to see that some basic football from Arsenal resulted in goals. Toure heads in a free-kick. Toure punts a long ball down the park to Bendtner, takes a touch, second touch in the back of the net. Nice.
Toure and Bendtner are two players who cause a bit of a debate, but its good to see them both do well last night. I don't think Kolo is the best defender in the world, but he is damn fast, damn strong and utterly determined to do his best. Ok, he is not great in the air, he can sometimes make a mistake with his positioning, but for my money, he is leader on the pitch in this Arsenal side. Its Kolo who organises the defence at corners, its Kolo who is shouting encouragement to his team mates. Basically, I fucking love Kolo Toure and wouldn't swap him for anyone.
The same cannot yet be said about Nikki B, but who knows, he started a game last night and scored two goals. That is a big step up from his usual super-sub routine. The fact that Nikki B is our 4th choice striker, and is clearly a better than average Premiership player, is a good sign. So lets keep with that positive thought.
I expect Bendtner will get another game against Burnley on Sunday. If he can score again, then he will be quite hard to drop against Roma. So good luck to him I say.
So, the pressure on Aston Villa tonight and I am suddenly a big fan of Man City. Its a tough one to call, as Villa are in a sticky patch having had to throw their UEFA cup campaign and still getting pinned back by Stoke at the weekend. Citeh, on the other hand, are full of overpaid, lazy players who are just collecting their cheques. But on their day, Citeh have the ability to beat most teams.
If Villa drop points tonight, then we are right back in it for 4th spot. Come on Citeh!
Posted by Ted at 11:05

Did watch the game yesterday, and Nicky B was solid for the whole game. Arshavin is clearly a class apart from what we are used to - but you could tell that he had "spat his lungs out" again by about the 60th minute. He was really unlucky not to score 2 or 3 times, and will be a hadnful whenever he is on the pitch.

Denilson was his usual industrious and underspoken self. Song had a half to forget, and one to kind of think about a bit then kind of stop thinking about it, without actually activel forgetting it.

Oddly my concerns at the moment are for CLichy and Sagna. Not sure if they are being exposed more regularly by their wingers, but they are making a lot of mistakes, and not bringing the noise to their attacking game. CLichy's crossing is simply awful

I love Kolo, I think he's fuckin' ace. I love Gary and Barry our full backs too. In fact out of the starting 11 week in week out, Gary and Barry are a tonne up on the rest of the team this year. I'm not surprised they are getting exposed our wide midfielders don't really know what to do when wide, I suppose the weak area of the park (central) means they have to pull inside far too often.
Good result, but it was against West Brom. I'm not over the moon, but I'm happier than I was this time yesterday.
Let us not forget, West Brom looked like they were drowning yesterday, it wasn't so much as out of their depth as just out of their nappies and a first day at pre-school.

We've got a real chance to correct the errors we made earlier in the season over the next few games.

Villas run of league games is tricky compared to ours. However, there are a few hirdles in the way;

- O'Neil's "professional foul" in throwing away the cups to gamble on fourth means they have much fewer games than us
- The final games of the season for us contain Chelsea and Utd, who could be still in title-deciding games.
- Our "new signings" of Eduardo, Cesc, Theo and Rosicky may make the impact we need to pick up momentum.

I don't think the number of games matters as much as confidence and form.

Villa's form is awful, ours is average, if we can build on the west brom result then we can get some momentum going, while they will have to respond of risk being overtaken.

Villa are a good side, but they are a bit of a one trick pony, maybe other sides are showing them a bit more respect now and this makes it a lot harder for villa to break them down, maybe that's just chat, who knows.

We're back in it. Thank god for that. I saw most of the West Brom game - Bendtner played very well. I'm not a fan but he deserves the credit. Arshavin has what it takes, he just needs fitness. Denilson was solid, Song was poor. Almunia, yet again, made a couple of important saves/interventions.

We have a real chance now.

Don't start believing we're any good again. If you build up expectations, it will only lead to disappointment.

It's Wenger's speciality over the last 3 years.....