We came, we saw, we almost lost 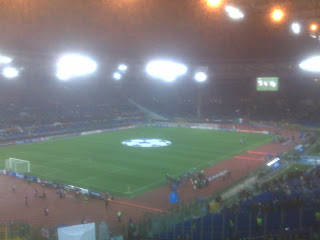 Apologies that this match report is so late, but the world needed some justice today, and thankfully I was there to dispense it. All for a very reasonable fee. But here we go. Its the Roma match report, Ted stylee.

I believe it was Tigger who first sang the song "the wonderful thing about winning, is winning's a wonderful thing'. It was also Tigger who pointed out to everyone else in 100 acre wood that Eeyore (or whatever the fuck the donkey was called) was a miserable gobshite who should be boiled down and made into glue.

Obsinho and I thououghly enjoyed the trip to Rome. Its a quality place, truly one of the world's most beautiful cities, and with a great footballing history. Its an eclectic bunch who make these away European trips, a good deal of foreign Gooners (big shout out to the nutters from Denmark), a bunch of resting builders, and all of them legends to the core.

The overreaction to the Ultras was evident from the start. In my opinion, Italians are a generally predictable lot, and most of the threat is noise, posing, and pinching your missus arse when you are not looking. Or even when your are looking. Cos they like to demonstrate their machismo when they get the chance. We didn't see any trouble, there wasn't a bad atmosphere in Rome. In fact, quite the opposite. The Ultras are mostly fun, a bit provocative maybe, but unless you go looking for trouble, or are very unlucky, they you won't find it.

But the Ultras are great football fans. We were in the stadium a good hour before kick off, and it was over half full. The Ultras were in good voice, but so were we. They chucked a couple of things, we chucked them back. It was good family fun.

Almost everything that could be said about the match has already been said. It was tense, painful viewing. Roma played in fits and starts, we let in a shite goal, Alumunia made a great save, and then another. Almunia - you really are the most underrated keeper in Europe.

4-5-1 isn't working. God we look shite. Has Eboue touched the ball? Shite, I can't believe it, Clichy and Sagna are both being given the run around. Thank god for Gallas. Time after time, right place at the right time. You know, he's not all bad Billy G. Clearly a bolt loose upstairs, but I'll forgive him. He was great.

Bendnter off. Eboue off. Walcott on. Eduardo on. 4-4-2. Excellent. I think I'm with Rhino on this one - this is it. This is the formation we should have had, they won't be able to deal with this. Good night Roma. Its been a pleasure.

Its not happening. Don't understand it. Has Theo touched it? Where is Eduardo? Hang on a minute, we aren't getting anything in the air now Bendnter has gone. Actually, Nikky B got a load of the ball. Maybe he wasn't so bad after all. Oi Arsene - get Nikky back on the pitch. Where is that lanky bastard Diaby? Fucks sake.

Kkkkeeerrriiisssttt. Its penalties. I don't believe it. How have we not beaten these bastards? Eduardo is first up. Shite penalty. Saved. That's it. Can I go home now? I'm never doing one of these trips again. The pain's just not worth it. God, i can see the shite on Le Grove already. Bet none of those cunts are here.

Wait a minute. Some Roma loon's just hit a shit penalty. Almunia saves. Vucinic? He was awesome all night - stuck Sagna on his arse at least twice, then did the Clich. Don't believe it. We are in this. Come on Almunia. We can do this.

4th penalty, Walcott. Respect to you Theo. Scored somehow. Almunia would have saved that.

5th penalty. Denilson. Not Denilson. Anyone but Denilson. The blogs will kill you if you miss. You've not been great tonight my young Brazilian friend. You started well, but faded trying to stay with Totti. I don't blame you. Missing this is going to finish you.

Denilson scores. What balls that bloke has. He must have told Wenger he was up for it. Wenger put him in 5th, the anchor man. You're 20 years old and Wenger has picked you as the anchor man in a Champions League penalty shoot out. And you delivered. You absolutely delivered. Thank you.

And that was it. We were through. No one will remember this next season. You win on penalties, you're a winner. Just ask the Germans, ask Liverpool. We have been haunted for years about being the best team in Europe, but we lost our final against Barca. The next year, the heavily fancied Arsenal crashed out against PSV. Just fucking win. Nothing else matters.

Give me anyone next round. Maunre? Barca? Bayern? No problem. Anyone. We'll take em. Want to know why? Because Arsenal have got their luck back.
Posted by Ted at 21:09

Keep up the good work !

well said. No one talks much about how lucky we were against villareal in 2006.

great work Ted, must have been an awesome trip!

Good write up - bit late, but certainly timely in respect of today's game.

Looking back on it, we went to Rome and played a solid game. We went through, and the buzz from the win coursed through the players as Tonetto blazed over. RVP was loving it.

It has been said plenty of times by plenty of pundits and blogers, but maybe this could be the kick in the ass to give us a good run. Alternatively, it was simply a good night to be a Gooner, and screw the lot of the press who were busy felching Fergie's bunch of millionaire lady boys.