Pathetic scousers and a big opportunity 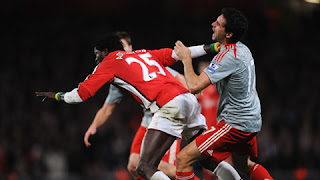 The media reaction to Sunday's game has really beggared belief, there is just no logic or coherence to their reaction. Adebayor is sent off for two minor offences, one of these was arguably not even a foul, these were his only two fouls and he was not even given a warning prior to his second yellow. This was in the same game that Howard Webb allowed Carragher and Lucas to foul and foul with virtual impunity. This is simply shit refereeing, how the hell can players be expected to respect such incompetent referees who show no consistency with their decisions?

Brain dead haddock fanciers like Des Kelly make a living from chatting breeze, so I'm not surprise to see the him showing an understanding of football comparable to that of a dead flea. It's simply incredible that so many fat hacks who have never even played the game feel able to compare Adebayor shielding the ball to a straight legged studs up lunge, they really are of the armchair breed. At least Alan Hansen labelled Webb's decision to show a second yellow as a 'massive mistake'.

Emmanuel Adebayor has quite rightly been speaking out on the subject and defending himself as he is perfectly entitled to do. It really does stink that the FA's stupid disciplinary system does not allow a two yellowed red card to be appealed, the rule is just lacking in common sense. It also begs the question as to if John Terry or Wayne Rooney had been sent off for so little, would they get such generally harsh words from the press?

The way in which Arbeloa has escaped criticism for what can only be described as cheating is shameful. If an Arsenal player had cheated in such fashion we would not hear the end of it, as it was he's escaped pretty much scott free. He's even had the cheek to deny his cheating:

”Adebayor is player who uses his arms and elbows when playing and that usually means a foul, I had nothing to do with the sending off."

These are the words of a cheat on the defensive. Adebayor has every right to use his body to shield the ball, replays conclusively show that his arm stayed perfectly still next to his body and the arm remained straight and down by his side at all times. The contact was absolutely minimal, if present at all, while Arbeloa's pathetic moaning and rolling around was not the reaction of someone who had been genuinely hurt. A player with a genuine injury does not roll around in agony, they lie still, whereas a cheat who is trying to get his fellow pro sent off will feign injury and roll around to con the ref.

Anyway enough on that incident, the most important thing was that Liverpool showed themselves up to be an average bunch of cloggers, while we showed some real guts with our ten men. Alex Song and Denilson was superb in the middle, while Nasri and RVP really rose to the challenge in the second half, Diaby was not as bad as some suggest but his decision making is slightly foolish to say the least. The only dissappointing thing about the game, other than Arbeloa's thetarics and Webb's vacuous officating, was the lack of concentration at the back for Liverpool's goal. Certainly away to Villa with the pace of Young and Agbonlahor we better not defend so sloppily and high up the pitch, we'd do better to sit back and clog the game up with men behind the ball, then kill them on the break. It would not be sensible to go there and try to control the possession, then let Villa do what they do best, that is play on the counter.

Cesc's injury opens up some big doors for Denilson, and possibly young Aaron Ramsey. Hopefully Cesc won't be out for too long, injuries to the medial collateral ligament are slightly unpredictable in their speed of recover, it really could be anything from three weeks to three months. Adebayor's suspension also leaves a bit of a selection headache, I'd quite like to see young Carlos get a game ahead of the lethargic Bendtner. Anyways the Villa game is massive, I just hope we don't get another cretinous performance from the officials.
Posted by 1979gooner at 09:39

I hear that Cesc is out for three months. Personally, I think he could do with the extended rest. However, it does crystallise the need for a new midfielder. If Wenger decides to stick with what he has, there will be a riot.

I would go with someone relatively cheap, with more industry than flair. Jimmy Bullard may not be the best in the world, but he would add the hard yards to our midfield again.

Just seen Wenger's xcomments on Sky News that he will look to "internal solutions" to the Cesc injury.

Absolutely 100% fucked if he buries his head in the sand this time.

If he doesn't spend money again, and we don't get into the Chamopions League (both big "if" situations at this point), then I do think it will be hard for the Board not to sack Wenger.

There will be a lot of noise for it certainly.....

Wonderfully impartial as ever 1979. But you might want to use a different photo to highlight that "his arm stayed perfectly still next to his body and the arm remained straight and down by his side at all times."

would a foul/card be given if Arbeloa committed that sorta thing against Arsenal/Adebayor ?

Thank you for your kind words. The answer to your question is, of course, no. That is the wonderful and unpredictable nature of football and refereeing for you. With such a victim complex, you must be a Scouser.

the video I linked to shows quite clearly that his arm stays still, relative to his body,

yes it's not perfectly by his side, but it stays straight and doesn't swing, he doesn't bend his elbow etc

obviously it's not possible to have one's arm perfectly by one's side without it being fused to one's abdominal wall, a rare finding i would imagine

there's no foul there

that's my opinion, as unbiased as they come!

cheers 1979, I will bow to your considerable medical knowledge on abdominal walls and chatting up old grannies.

Whichever way I try to explain it, however ineptly, it was arguably not a foul, if a foul it was no more than that, never a yellow.

I thought this letter to F365 explained it well:

"Having watched the Arsenal vs Liverpool game on TV, I've just re-watched the MOTD highlights again, and I can't fathom exactly what Adebayor was expected to do in the instance that led to his second yellow card.

It can't be that extending his arm to shield the ball which happened to be in HIS possession was wrong. It can't be that he was expected to turn around without lifting his foot off the ground. So it can only be that he wasn't suppossed to turn with the ball under HIS control. What then exactly is he supposed to do? Look at the defender running into him and leave the ball where the defender can get to it so that there's a 50-50 challenge? Rubbish!!

Adebayor did the right thing in my view. He did not 'challenge' for the ball, it was comfortably in his possession. His foot was not raised to challenge for the ball, his foot was raised so he could pivot on the other one and go in the other direction. No football player should be obligated to allow an opponent to challenge him when there is the option to change direction and evade said opponent. And it is this that Howard Webb is effectively saying. Look boy, the Liverpool player was running to tackle you, and he can't do that from behind, so you can't turn your back on him. "

Just visiting n reading the news...im a fan of gooner from indonesia...nice blog