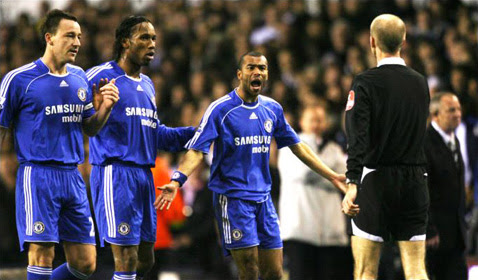 The sad thing about the FA's 'respect' campaign and the intimidation of officials by certain players and managers is that their bullying and intimidation works. Until something is done to put an end to the bullies and cheats prospering, then it will simply go on and on and on.
The recent Adebayor red card was the tip of the iceberg for me, and it's been an iceberg that has consistently seen Arsenal players carded for trivial offences while the opposition get away with murder at the other end of the field. One wonders how much comments like Alex Fergusons's on Howard Webb come into play in affecting the decisions in later games:
"It is very difficult for the referee. I think Howard Webb has a great chance to be the top referee but today was a big game for him and, at times, he favoured Arsenal. Their second goal came from him not giving a free-kick for a foul on Louis Saha on the far side. It should have been a foul for us."
Ferguson should have had the book thrown at him for these disgraceful comments, it's become a cynical tactic to try to intimidate officials before and after games with these kind of comments, how many times have the likes of Allardyce and Ferguson done this to try to make an official see things their way?
Watching the Manu - Stoke game today I was amazed to see how much intimidation of the referee Manu were indulging in. Neville argued every decision, Rooney threw his arms down in disgust every time he didn't win a free kick and routinely told the officials to 'f*ck off', while Ronaldo fell down and appealed every time the wind got up above 5mph.
The referee and linesman ignored the worst foul of the game, committed by the despicable Rooney as he threw a violent and malicious elbow at an opponent when in clear view of the linesman. They also ignored Ronaldo as he petulantly kicked an opponent completely off the ball, incidentally that's about the fifth time I've seen him do that this season and he's escaped punishment on each occasion. Amusingly the chief hypocrite Ferguson claimed Gallas should have been sent off for a little kick out at Old Trafford a couple of years back:
"I thought Gallas should have been sent off," he said. "The referee must have a look at that again. He kicked Nani from behind and the referee called both over because they sized up to each other."
There really is one rule for Manu and another rule for the rest of us, I'm sure that the systematic intimidation of referees by their manager and players is a big reason for this case of blatant double standards. There's certainly something badly wrong with a system that doesn't allow Emmanuel Adebayor to appeal a yellow card that was not even a foul, while Wayne Rooney is allowed to get away with yet more violent play and the routine intimidation of officials.
Players often mirror their managers, no better example of this can be Rooney mirroring Ferguson in the rude aggressive bullying tactics that he employs on a regular basis. Ferguson's refusal to be interviewed by the BBC is yet another blatant example of how the dour Scot tries to bully people into seeing things exactly as he wants them to. It's just a shame we don't have referees with spines in this country who could stand up to them, instead we have a cohort of spineless weasels who are afraid to upset the bullies. As a result of this we will unfairly miss Emmanuel Adebayor today for the big game away to Villa, let's hope we can do it without him. Come on you Gunners.
Posted by 1979gooner at 15:07