Dust settles on the Carling Cup 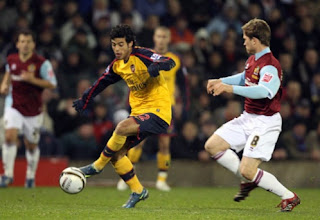 The Carling Cup campaign is over for another season. Its a shame, because the kids' performances against Sheffield Utd and Wigan have been some of the highlights of the season.

However, its also much ado about nothing. Progress in the Carling Cup is nice, for what its worth, but it really isn't worth getting that excited about.

It seems to have been assumed before the game that the kids would breeze past an in-form Burnley side, who are sitting 4th in the Championship and have seen off Fulham and Chelsea in the last two rounds of the Carling Cup, which is no mean feat.

This was the first time the kids have been drawn away in this competition and a cold December night in Burnley is a long way from from home for messrs Vela and Merida. The team Wenger picked was relatively weak, at least defensively, compared to the excellent partnership at the back that Djourou and Song formed against Wigan (both of whom are now in the first xi). Paul Rogers was given a starting debut at the back with Silvestre, and he is a player I have quite liked in the couple of games I have seen him in. But this was a tough night and he was switched at half time for Lansbury. The back four in the second half was quite difficult to figure out, but Hoyte seemed to move into the middle, with Lansbury at right back.

Its hardly a surprise that a couple of mistakes were made at the back, and I don't think conceding two goals away from home at Burnley is any great surprise.

However, what was disappointing was the way we attacked the Burnley goal. Vela did ok, but was clearly gagging to score a wonder goal, and Bendtner was just poor. He looked slow, indecisive and wasteful. I lost count of the number of times I shouted at him to get stuck in.

Bendtner is a real mixed bag. His left foot finish against Kiev was top drawer. A real belter under pressure to win the game. He often seems to score goals when he comes on as substitute - he knows he has 20 minutes to make an impression, plays on the shoulder of the last defender and goes straight for goal when he gets a sniff of a chance.

When he starts games, he plays deeper and deeper, trying to link up the play - but he is simply not very good at it. If we could ever get to the situation where Ade, RVP and Eduardo are all fit, then Bendtner is not going to be seeing a lot of first xi action. However, for now at least, lets not be too hard on him and remember how shite the 3rd and 4th strikers are at clubs like Liverpool and Chelsea.

So, lets put the Carling Cup to bed for another year. However, if the first xi can come close to repeating what the kids did to Wigan, then this saturday will be a formality. Unfortunately, that is exactly why I am worried that Nasri & Co won't bother to turn up and get stuck in.....
Posted by Ted at 10:32

Good article Ted but I've had enough of Bendtner - he has a crap 1st touch, doesn't hold the ball up well, isn't that great in the air for a big man, doesn't work hard, isn't that quick and rarely finshes when one-on-one.

Alright it's actually because he wears pink boots.

Youngsters from that team that may play regularly for the 1st XI in time: Vela, Ramsey, Wilshere and Gibbs.

Bendtner is a frustrating player, he can look so good at times, but also so very bad at others.

What people cannot accept is that apparent lack of effort, who knows if that's his style or just him being lazy.