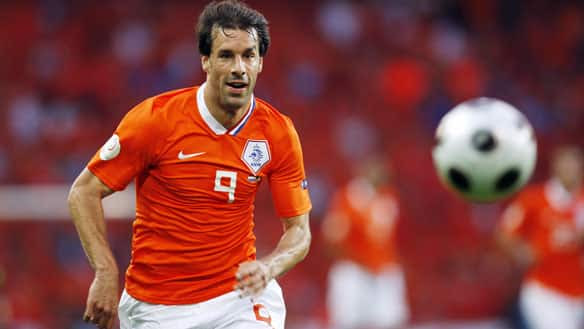 Instead of concentrating on the positive, I have decided to be a thoroughly vindictive bastard in nominating my top ten c***s of the tournament so far. Obviously I am making no pretence to be objective, this top ten is sculpted by my most rampantly partisan neurones that care not for the pretence of being fair minded or neutral. So up to the number one in top of the pops fashion:

10. Luca Toni - aptly compared to a blancmange by Mark Lawrenson, his pathetic diving wins him his place despite it being more comedy than callous in its nature.

9. Oojer - had to get a dirty Blackburn player in and with his vicious attempts to break Ashavin's legs he has cemented his place.

8. Kovac - hard Croat defender who makes it on the list courtesy of a shocking two footed lunge in the first group game that didn't even merit a card.

7. Ruud Van Nistelrooy - despite doing nothing particularly malicious this time round, Ruud earns his place thanks to several years of disreputable endeavour as a dirty Manu player.

6. Modric - he plays for the scum and is another Croat who seems to think it's ok to dive in with two straight legs and studs showing, good player we must get used to abusing.

5. Cassano - an Italian version of Ronaldo, a despicable petulant diver who irritates me before I've even turned the TV on.

4. Camaronese - there's a bit of recurrent Italian theme here, with good reason I may add, this particular one just strikes me as a rather nasty piece of work.

3. Makelele - despite not lasting long in the competition Makele still found ample time to elbow, stamp and scythe; as he gets older he gets filthier to make up for his fading skills.

2. Gattuso - I've lost count of the number of dangerous tackles this dirty midfielder has made, he could have earnt four yellows in the France game alone, only an Italian could get away with such filth.

1. Ronaldo - need I explain myself, this petulant spotty little git represents all I detest about the modern game; he lacks any trace of modesty, class or sportsmanship. He now claims that his 'loyalty' towards manu means he deserves a transfer, what a deluded little shit.

Before finalising this list I shall put the debate open to the floor, so please make your arguments heard. Is there anyone I have forgotten or anyone that really doesn't deserve to be on this list?
Posted by 1979gooner at 21:41

camoranesi is half argentine, that should see him jump a few places at least!

Good list 6.5/10 for the names there, you didn't add the Euro refs who have shown without a doubt that bats are would do a better job.

haha,
sounds like pub talk to me.
i love it.
since we're making points that dont need any real justification,
ARDA TURAN: strikes me as a typical dirty little turkish c**t.
Sorry, but you have to have a Turk in there.

Am I the only one who got a little vexed over that little detail Thierry did on Robin?

1. Ashley Cole / Frank Lampard / Rio Ferdinand. They are not even at Euro2008 but you can still smell their c*ntiness.

2. Fernando Torres. My vote for the most overrated player of the tournament. Been shit every game, dives a lot, appeals for everything, does fuck all for 80 minutes and then shakes his head at being substituted as if he is about to score a hattrick in 2 minutes. He'll probably now be brilliant in the semi and final, but until Cesc came on last night, Torres was making me support Italy. And thats despite the immense c*ntiness of the entire Italian squad.

3. Fernando Torres. Again. For being a c*nt last season.

for such a strapping youg lad he does go to ground with remarkable ease,

his head shaking summed up his arrogance, as you say he did bugger all last night

well i think you this article is way too contentious..

In addition to your list, here are some that really annoy me:

My vote is for Gary Lineker - nauseating beyond belief. And he used to play for the scum. And he wishes he was Adrian Chiles.

P.S. Italy ruined by weekend - was that not the most negative footballing performance seen since every away team at the Emirates last season?

a tie for first place in no particular order

1.- the entire italian national team.....scratch that....the entire nation of italy. they should dominate diving in the olympics

It's not intrusion but an humble request to the community here.

I have recently started an articles website and would request you (I will appreciate if you can) to please spare some time and post articles about soccer at my site.

Torres...Number one cunt!
And Arragones is a class 'A' cunt too.