Dazzling dutch and the rest 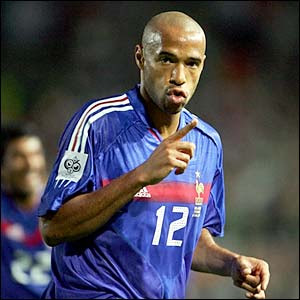 I've always had a bit of a soft spot for the Dutch, they play such excellent crisp technical football and their orange shirts are rather unique, so I can't say that I was particularly upset to see France destroyed 4-1 the other night. France looked like a tired old side that had run out of steam, personified by Thierry Henry who despite his goal looked a shadow of his former electric self.

Henry, Thuram, Makalele and Sagnol and simply not the players they once were, while the likes of Malouda are just not up to the job. This combined with Domenech's tactical ineptitude, exemplified by playing two holding midfielders, is a recipe for disaster. Domenech is blaming the players already, maybe he should try to select a functional side that could play together before seeking to blame everyone else but himself. Italy are carrying quite a few aged veterans as well, however Donadoni is rather more clued up than Domenech so I'd tend towards Italy if I had to throw some money on the final group showdown.

Having said that Holland were excellent, RVN did lead the line well and was well supported by Kuuyt and Van der Vaart as they broke quickly and incisively. Schneider is an excellent all round midfielder, while they were physical and tough at the back. Van Basten has done a truly sterling job, as well as playing some crisp incisive football the Dutch look an extremely organised and well drilled side, and he is getting the very best out of his players, the exact opposite of Monsieur Domenech.

Spain looked decent again in their 2-1 win over Sweden, possibly a bit over elaborate and lacking in width, thus showing why they might struggle to break down some of the better defenses around. Russia deserved their win over Greece with Roman Pavluchenko looking like a rather useful centre forward, quick, tall and strong with a great goal scoring record, a premiership club could do a lot worse than bringing this lad in. Croatia's dirty tackling, Turkey's diving and Ronaldo's general smugness are other things that have slightly angered me so far. Other than that it's been a pretty decent tournament so far, in fact it's a bit of shame that it'll all be over before we've had time to blink, so here's to some more great football and to enjoying watching the Dutch while they remain in the competition.
Posted by 1979gooner at 00:22

If we ever have to comtemplate life without Arsene, and I'm hoping that is not for at least another 4-5 years, I wouldn't mind Van Basten taking over - seems like a good bloke, his teams play good football, the players seem to like him and he is, of course, a legend from his playing days. Could do a lot worse.

Sad to see the demise of a great French team. They just don't seem to care as much anymore. I am also backing Italy to win and go through...so that'll be 4-0 to France then.

Agreed. Van Basten seems to have generated a real team ethic in a group of players that have a history of falling out with each other.

Italy were crap throughout the last world cup and should have lost to Australia.

So they will probably win this tournament as well.

I agree on Van Basten, I'm sure he'll be very much in demand.

I'd like to see Romania win and put France and Italy both out.