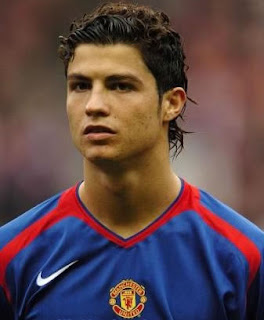 Cristiano Ronaldo is apparently paid £124,000 per week by Manchester United. He scored a bag full of goals last season and led ManUre to a Champions League and Premiership Double. Voted Player of the Year two years running and is widely regarding as the best player in the world at the moment.
He also clearly wants to move to Real Madrid this summer, who are alleged to have offered him a mind blowing £184,000 per week. A transfer fee of £70m has also been mentioned.
As an Arsenal fan, I started off by finding this story quite hilarious - imagine how shite Manure will be next season without their Portugese hairdresser? What a relief that Real Madrid aren't courting one of our players for the first summer in a decade. Long summers of torture over Overmars, Anelka, Vieira, Henry all come flooding back.
However, I think the Ronaldo state of affairs is actually quite depressing for everyone, not just ManUre. It reflects the truth that football is really just about money for most players, and as the fans who buy the tickets, shirts and Sky subscriptions, we are all guilty of feeding the machine.
Looking from an Arsenal perspecrive, most pundits and blogsites are furiously demanding a raft of signings. The spending has to be big and it has to be now, otherwise Wenger has to be sacked. The idiocy of that sentiment is revealed by the hypocricy that every fan who demands £100m of talent to be purchased by Wenger this summer, is either also demanding absolute loyalty from the raft of promising youngsters that they will be condemning to the bench (Walcott & Vela spring to mind), or they are quite happy to move them on to anyone willing to buy them (Rosicky, Eboue and Senderos to name but a few). That is to ask for the world and the stars.
Being an absolute cut-throat does not sit easily with trying to engender loyalty elsewhere in the squad. If a player feels that they are not on a fair wage and their agent tells them that they can earn more elsewhere, then why the hell should the player not move on if thats what they want to do?
The fact that Cristiano Ronaldo wants to move to Real Madrid highlights this dilemma. Is he a money grabbing mercenary or a shrewd pragmatist that dreams of playing football in Madrid rather that the shitehole of Manchester? I think both views are equally valid.
It also reveals that you cannot buy loyalty from anyone. It doesn't matter what wages we offer Cesc, Adebayor or anyone else. There will always be someone willing to pay more. So long as the player feels that Arsenal are paying a fair wage, then they will stay because they are enjoying their football and don't want to risk moving to another team and failing.
There is absolutely no-one better at judging players in world football than Arsene Wenger. Trust him.
Posted by Ted at 09:21

as fans we should realise we cannot have it all,

it is incredibly naive, as you point out, to expect our players to have undying loyalty to the club

if the club treats them well then I expect the player to show respect back,

Brilliant, Its nice someone highlighted that duality of cut-throat competitiveness and loyalty. Its daft to expect people to accept being treated like cattle and show undying loyalt at the same time. Another is to expect spending £100m every season and expect ticket prices to stay low.

I personally quite fear united getting £100m for Ronaldo. He certainly was thr major factor in their achievements last season, but Fergie does have a decent (and that does not mean perfect) record of picking good players. Wit a £100m he could certainly improve what is a very good squad - and I think it was the squad strength as much as Ronaldo's ability that made Utd stand out last season.

Secondly, if Madrid do spend £100m on Ronaldo, Barca spend big on a striker or two, will Platini then issue a new and updated rant about the horrible money men driving La Liga down the rings of hell?

There are 2 reasons why I want Ronaldo to stay at United.

1) When we win the league and he has 2 anonymous games against Arsenal yet again it will be so satisfying. The best player in the world is supposed to be able to be great against anyone, we all know the top teams almost always keep him quiet, so I don't think he can possibly be the best, even if he has been the most important player.

2) For the sake of club power I want to see a big fuck you said to Real Madrid and a big fuck you said to Ronaldo. Players sign contracts meaning clubs are supposed to have the power and although I can see how that's not the case, I really hate it when players manage to hold the club to ransom so I hope he somehow gets forced to stay one way or another.

I think part of the thing with loyalty is Arsenal are a fantastically popular club (even if we don't always seem it). Players like Villa, Toure and Richards all reportedly want to play for us. I'm not saying we SHOULD buy any of those, but it goes to show that there are actually some players who we probably could get some loyalty out of and not only through big wages. Some players, and not only kids, really would like to play for us, and it is appreciated.

Like RvP. I really don't think he's bothered about going somewhere else. Likewise with Clichy and perhaps Sagna too amongst others. I can't imagine if Arsene told Clichy that if Real Madrid try to buy him he can go that he'd say yes. Maybe I'm naive here but I think a handful of players in our squad genuinely do appreciate Arsenal. Same with Toure who just said he wants to stay for his career.

Totally agree. One of Wenger's great strengths is that he inspires loyalty. There are so many retired and ex-Arsenal players who say that they got treated best at Arsenal.

We don;t pay the wages that Real, Chelsea and Man U do but we do pay well and have a great training ground and stadium - players appreciate these things along with excellent back room staff.

By the by, I was excited to see Nasri come on last night as I haven't seen much of him - he lasted 16 mins before Domenech replaced him after the sending off! Oh well. Sad to see the French go out so disappointingly and good to see Billy G hasn't lost his ability to rant at the end of a game....plus ca change.

I see that Kolo has announced he wants to stay at Arsenal for the rest of his career.

Not as much as I love jens