Arsene knows less than I 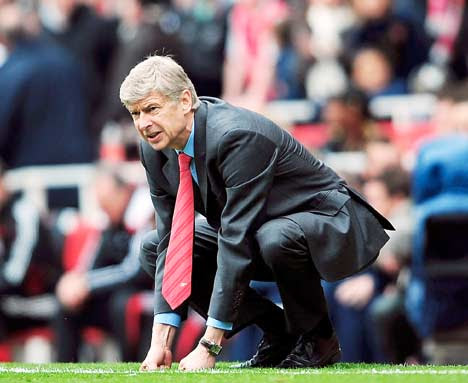 It's hard carrying the world on one's shoulders, not only is the world heavy but having to bear the responsibility that I have chosen to take on is no mean feat . Fortunately I am made of better more hardy genetic stock than your average Gooner, so I have decided to appoint myself as the single unified voice of Gooner reason. This was motivated by watching years and years of dismal failure under our snail eating disgrace of a manager, Arsene Wenger, and having to put up with so many idiots who could not see the man for what he really is, an almost German who has wasted several years of his life away from football educating himself. The man is a bad joke, he knows so very little and may even be a Tottenham fan in disguise trying to sabotage our once great football club.

If anyone should disagree, they are wrong, if anyone should argue, then would be advised to pipe down, and if anyone should continue to argue, then my friends shall release the hounds. I can tell you that Wittgenstein and Russell would be shitting their pants if they had to take on my logic in a one on one. It's a sort of democratic thing, I represent the opinion of Gooners by popular demand, I'm the Zanu PF of North London because I'll only leave my self appointed post if confronted by several large tanks and a couple of tooled up choppers.

I won't say I haven't been feeling the strain though, I have been known to have problems with a split personality; luckily I upped my lager consumption in order to kill off my second brain cell, and now my visions are crystal clear. My rage has been consuming me from within, my hands tremble constantly and insomnia tortures my soul, but divine visions greet me in the night; I have seen the holy land, Arsene is no more, he is in my back garden underneath the sprouts, and I am our new manager and have just spent 1.6 billion on talent from the Championship creating a new English spine for our team. The silverware will be ours Gooners, just agree with me and bully anyone who does not, come join me in this self congratulatory party of wanton flatulence.
Posted by 1979gooner at 23:39

Labels: Arsene knows less than I

That is definitely the biggest piece of bullshit, i have read in a long long time....

Whatever mate, our once great football club only became great again becuase of wenger. Yes he has three trophyless seasons but we have made a couple of finals in that time and were leading the league for the majority of last season.

If we won the league last year would you really be saying these things!

There is a reason why wenger gets millions of pounds each year because he educated himself! Unlike people like you who can only bitch about other people due to not having a cock big enough to satisfy there girlfriends or the brainpower or drive to actually make something of themselves!!!!!

fuck u bitch fuck u fuck u

Ok, I'm guessing you are the media..

bullshit... you have lost credibility. this is ridiculous

HAHA! This is brilliant, thank you! The people leaving comments here obviously don't know the meaning of the word SATIRE!!! Amazing how people take this kind of thing seriously and don't get it! Ok, I'll spell it out: THIS POST IS A DELIBERATE PARODY OF THE MORONS ON CERTAIN ARSENAL BLOGS WHO WHINE EVERY DAY ALL DAY LONG ABOUT HOW THE CLUB IS DOOMED AS LONG AS ARSENE WENGER REMAINS AT THE CLUB AND WHO THINK THEY KNOW BETTER THAN HIM HOW TO MANAGE A FOOTBALL CLUB! Got it now??? Sheesh! Brilliant post, loved it!! :-)

I hate to be the one to break this to some of you but I think he's being sarcastic......

u have no right to call yourself a gooner...

GOONER ARE YOU HAHAHAHAHAHA FUCKING BRILLIANT!!!!!!

haha how do people not see what this post really is? unless everyone likes flatulence

Why dont u shut u stupid fucking trap? u sound like a whining little school girl bitch! u are the traitor, u are the spurs supporter! so shut that pathetic fucking face of urs and go jerk off to aaron lennon, TOSSER!!

You have surpassed yourself 1979!

Fantastic, particularly like the 'Zanu PF' reference, bit over some peoples heads sadly.

Still nothing a dose of electro convulsive therapy wouldn't fix!

YOU ARE A POOR EXCUSE FOR A BLOGGER; YOU AND YOUR THINLY VEILED WELL CRAFTED INSIGHT THAT GENERATES A TELLING REACTION FROM THE CRIMINALLY AVERAGE BE DAMNED! I LIKE TO WRITE IN CAPITALS BECAUSE IT MAKES ME FEEL POWERFUL!

"They really do have an irony defficiency. I'm beginning to think that in some parts of [the Arsenal community] people have started to mate with vegetables."

the next time you decide to open your mouth you tottenham supporting moron save it for someone who cares. i think i speak on behalf of all true gooners when i say u r an absolute disgrace and don't deserve to support the gretest club.

Are the people leaving comments that seem like they took your article seriously just joining in with the joke? Or do they not get the joke?

Also, would you be interested in maybe swapping blog links?

just started, need some hits and some feedback

Thank you 1979gooner. You've got a long way to go before you top Leopold Mendacious over on the old real ANR but you definitely provoked a few chuckles.

It's remarkable how so many fans can have so few braincells collectively and take this article seriously.

It's genuinely remarkable. I thought education was free in the UK, everyone's entitled to it- and yet there's still mass stupidity of the highest order.

Well the article made me smile, nicely written too. It's just a shame that so many people are barely capable of working out how to find the words 'sarcasm' and 'joke' in a dictionary, let alone detect them.

In fact the ridiculous percentage of people who didn't manage to get this joke is perhaps quite telling of how our country is so fucking stupid.

Is it me? Or do I smell an unrepressable influx of stupidity inside here? Any above average people will sense the absolute sarcasm in the post. Flaming our lovely bloggers certainly shows 99% of you in here are not your average people. I cant believe people can be so deluded.

thanks for some rather silly swearing,

Great stuff mate. Today on my blog i posted a list of things that all Arsenal fans should know this summer. Check it out.

This is one of them bullshit articles that can be interpreted in a number of ways. Why are bloggers continually trying to be sarcastic and post shit like this just to rattle a few peoples cages then after say it was a joke.. "dont u get the humour of it". Its sites like this that piss me off, 2nd time im reading through this blog and i aint impressed. U need to do a better job mate! Stick to the truth and ignore all the media bullshit because i think every Arsenal Fan is sick of the lot of em.

I love your blog 1979gooner! You prove that this site is not just another arsenal blog. It's a pity so many people can't read properly these days.

I'm looking forward for the next appearance of the other half of your football personality.

If you hadn't noticed, despite some people's rather obvious paranoia, none of the satire on this site is directed at any particular blog or site

Satire is the best way of exposing these people for who they are. That's it really!

People can interpret things as they see fit, they can miss the point and abuse me, thus making themselves appear a little silly, or they can have a chuckle to themselves.

I'm not dictating a particular opinion or attitude, I'm just exposing some people for who they are.

The lack of moderation on this thread shows that you don't need to moderate comments, as idiots make themselves appear like idiots and it's best to leave their idiocy on the page to expose this!

Very good parody - its interesting that a few seemingly pro Wenger fans can appear to be as stupid as the anti Wenger brigade (well OK, no one can be THAT stupid)

hehe man that was brilliant sums up the thing thats been going around some of the bloggers (tottenhamitis). Zanu-pf ans english spine of for 1.6 billion, sheer brilliance man.