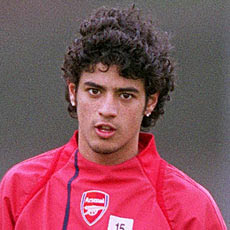 So then. Its been another quiet week really in Arsenal land. Not much has happened - Cesc has been great at Euro2008, Jens was a bit crap against Turkey and every single day the papers have been full of bollocks about Adebayor.
For anyone who is desperate to see Arsenal making lots of transfers, and I know theres lots of you, then I suggest taking a look at the BBC website here which gives all the transfers made by English clubs so far in June 2008. The only transfers of note, and I use the phrase loosely, are Muamba to Bolton for £5m and some plonker called "Two Saints" (but "No Career") from Barcelona to Spurs for £4.6m. Yes - it is a dream to move from the Camp Nou to Shite Hart Lane. A horrible, awful dream where you realise your career is nose diving fast.
The point is that absolutely nothing has happened whatsoever. Yet all the agents are desparate to get players moving between clubs so they can earn some commissions, and the papers need stories to sell and have column inches to fill. A loose tongued agent is the perfect friend for a journo.
Will Hleb find a club who are desperate to spend £15m for that elusive playmaker who is slight of build, scores no goals and sets woefully few up? Its unlikely now that Spurs have already blown their £20m budget on Modric and Two Saints. I mean come on - I would be embarrassed if Arsene spent £20m on those two. Still, its a shame for Hleb, as he now faces the prospect of having to come back to nasty London in August to play football for nasty Arsenal. Ha Ha. Enjoy the bench next season Mr Ice-Cream.
The Adebayor story is perhaps more interesting. I really like Ade, but I think there is a sum of money that we should take for any player - how I now wish we had taken the £50m that was reputedly offered for Henry after the Champs League final. Insread, we kept Henry for another year then sold him for £15m to Barca, having paid him £10m in wages for the last 12 months - a season in which he was poor. By my rough reckoning, that decision cost the Arsenal coffers about £45m. And thats an "Ouch" in anyone's book.
So, whilst I don't want Ade to go one bit, if some fool is going to offer us £30m for him, then I say "take the money and run". Arsene will then face the barrage of demands for an immediate replacement - Santa Cruz for about £15m to £20m is widely mentioned. David Villa is another prize-goose up for sale. (I think Guiza looks the best Spanish striker). Arsene might have a ready made replacement up his sleave, but its unlikely. None of Anelka, Vieira or Henry were replaced with expensive look-a-likes, so I wouldn't bet that Arsene will this time either. Perhaps one of the best direct replacements that Arsene did was in 2000 between Overmars and Pires, but few people saw it like that at the time.
So whith that in mind, I remember Arsene's comments earlier in the year , when he saud that he sees Carlos Vela as a front man next season, rather than a winger. I said at the time that there was no space for him up front with Ade, RVP, Eduardo, Bendtner and hopefully Walcott. That would be 6 players for 2, possibly 3 at a stretch with a change of system, starting places on the pitch.
But if you take Ade out the picture, then there an enormous Togonator sized hole up front for Vela to step into, or Bendtner, or Walcott, or Eduardo, alongside our first choice striker RVP.
It also seems from the Arsenal website that Vela has been given the 12 shirt for next season. This could be quite interesting.
Posted by Ted at 09:29

http://pl.youtube.com/watch?v=YQJTZSWf5AE <----- Fab Arsenal Vid. Can't wait for Barnet game, this season will be even better than a previous one...

exactly how I feel about the tedious transfer speculation

even a few years ago they used to have some dodgy facts before they wrote a story, now they just speculate without any facts, evidence or quotes,

whatever the truth about Ade, there is sometimes smoke without fire, although it may turn out not to be the case with Ade, if he is demanding stupid money after one good season, then we should bite their hands off for 30mill

we have plenty of depth up front, Bendtner is very useful and there aren't many young all round strikers as good as he,

it's ridiculous how players can sign a long contract, then after one good season suddenly feel they are entitled to quadrouple their pay or demand an immediate transfer

contracts should be respected both ways,

just imagine what would happen if a club cancelled a player's contract after one bad season,

they should not be able to have it both ways,

could some lawyers have a lot to answer for?