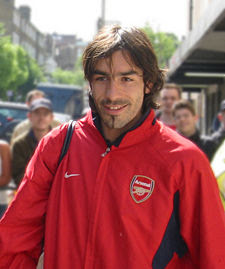 Given that its one of those pointless weeks with international friendlies on, I thought it was ok for a quick stroll down memory lane to say hello to one of the best Arsenal players of all time, Mr Robert Pires.
Bobby was simply great. Signed for £6m from Metz in 2000, he replaced Marc Overmars (another fine player, but thats for another post sometime) who had gone to Barca for £25m in a joint deal with Petit (he was pretty good too).
Initially playing in front of Silvinho (also quite good), he first season was not that great, although I do remember his goal away against Lazio in the Champions League quite fondly. However, he took off in his second seasons and never looked back. His Premier League stats for Arsenal are very impressive: 62 league goals in 189 games (I couldn't find his stats overall). Roughly 1 goal in 3 games would be ok for most strikers, let alone a midfielder playing in a team with predators such as Henry.
So what was so good about him? Well, its great to score lots of goals but he covered back as well. I have a sneaky feeling that Silvinho and Ashley Cole would have been more exposed for their defensive frailties if they had been playing behind Overmars, who thought tracking back was for other players.
Secondly, he was a technically superb footballer who didn't just rely on pace or strength. You can count his bad touches on one finger. In fact, you don't even need one finger, he simply didn't make bad touches. Probably second only to the mighty Dennis Bergkamp in terms of technical excellence.
He was also an exceptional passer of the ball, created a lot of assists and didn't hog it in the manner that some of our current crop of midfielders can do. Diaby probably holds onto the ball for two touches too many on each occassion, whereas Bobby was happy to play first time.
Bobby also had a great link with Henry on the pitch. They seemed to laugh and joke their way through games and whilst there was the occassional cock-up, e.g. the penalty fiasco against Man City, it was usually superb to watch and you just had to feel sorry for the poor bastard playing right back against those two.
Lastly, and it sounds strange to say it, he was just so French and in a bizarrely likable way. He had a column in the Guardian and a chat show on French radio about something weird. Somehow he reminds me of a footballing Jonny Depp. Plus everyone else hated him, mainly because he was so good. Opposition fans called him a diving cheat, but he did no more than Owen (v Argentina), Rooney (most games) and Gerrard (v Milan) on that front.
Its also great to still see him playing so well for Villareal with that other Arsenal legend (not) - Pascal Cygan.
Anyway, on this most boring of weeks, Bobby Pires - we salute you.
Posted by Ted at 10:31

Nice piece. I miss Bobby a lot - Rosicky has flattered to deceive too much for my liking. Bobby would certainly play left wing in my Arsenal greatest XI - Henry and him together were awesome. Best of all, he managed to pull off that ridiculous mini beard for so many years - not sure there has been a cooler player at Arsenal, including Thierry.

Although the press didn't record this quote he did also say; "And I really want to play in front of that ginger lad again, the one who always looked like he wanted to flip me over and give me a big Sol Campbell style seeing to. I miss that look so much"