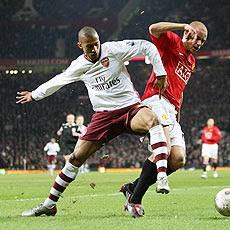 I'm in two minds about saturday's 4-0 thrashing by Man Utd in the FA Cup. Part of me wants to say it doesn't matter, just like the thrashing Spurs gave us in the Carling Cup semi-final (see posting below). However, I think the better half of me is screaming in frustration.

Man Utd were clearly 125% motivated for this game, presumably having been bollocked all week by Demento after their own lacklustre performance against Man City last weekend. As a unit, their team was simply unrecognisable from that which didn't turn up against Man City. Every single time an Arsenal player got the ball he was harried, hustled, shoved and usually fouled, which brings me onto the ref.

Unusually for me at least, I think Alan Wiley, the dimuntive referee, was very poor and contributed to the chaos that was Arsenal's demise. A packed house at Old Trafford heavily influenced almost every decision and it was not until he sent off Eboue for a nothing challenge that Wiley started dishing out cards to Man Utd players.
However, that does not even come close to my frustration with the players. Our 3 little blokes in midfield, namely Hleb, Fabregas and Eboue, all had terrible first halves, with Gilberto adding little defensive cover behind them. Eboue's game didn't last much longer than the half time whistle and I think this performance, or rather lack of it, now makes him a genuine doubt for next season. Toure and Gallas played as if they had never kicked a football before in their lives. They weren't quite as bad as the Stepanovs / Grimandi pairing back when we shipped 6 goals in at Old Trafford in 2001, but they were pretty close.
Hoyte and Traore completed the comedy defence. Hoyte was skinned on the outside at least 6 times during the game, which must raise doubts about his pace, and Traore simply does not defend. At all.

To be honest, the second half was not much better, but at least we started o kick them back. The introduction of Big Phil, Adebayor and Flamster added some much needed muscle into our team, but game was already well lost. In fact, if it was not for a sterling performance from Mad Jens, then Man Utd would probably have equalled, if not beaten, the 6 goals they scored in 2001. Absolutely shocking.

Its not easy to watch your team being shredded to pieces, but I guess this is what most supporters have to accept on a pretty regular basis. We lucky Gooners only have to watch it a few time a year, if that.
So looking for the positives, its a big wake up call, again, for this team which will hopefully mean that the performance against Milan will be far better. And boy does it need to be.
Demento will make as much of this game as he possibly can, but the truth is that for all the money he has spent, Man Utd have had more off-days this season that Arsenal. Most people will point towards our lack of strength in depth, but I say it's irelevant. We have bags of talent and potential, but Saturday was all about a lack of motivation. 11 pumped-up Arsenal players of almost any age would have done a better job than the majority who simply didn't give a shit on Saturday. The success of the Carling Cup side over recent years is testimony to this.
Lastly, whilst Arsene says he doesn't know what happened on Saturday, I strongly suspect that this was a team ordered dive. Wenger publically stated last week that Arsenal couldn't compete on three fronts this season, so the team orders for the Man Utd game were to take the hits, don't get injured, don't waste energy, see if we can go down 2-1 and get ready for Milan on Wednesday.
Arsene just didn't plan for the fact that Demento had his goons programmed on full throttle with no holds barred.

indeed, great minds think alike and all that!

completely agree with you as regards the ref and Eboue

how on earth can Eboue get sent off for such an inocuous foul and every single 'neutral' media pundit then not even question the decision! it takes the piss, you see much worse go without a yellow game in game out

Eboue is an idiot though and he has been given enough chances to redeem himself, I think he must leave at the end of the season

We need some more cover at the back too, Hoyte and Traore don't look up to it