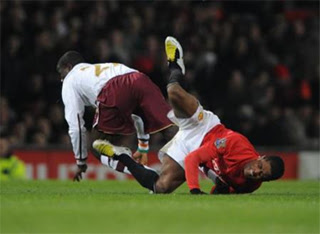 Emmanuel Eboue's tackle was stupid, it was a bad foul and that I do not deny, however the reaction that is has provoked has been more than a little unfair and over the top.

Eboue had his studs dangerously up, however the worst that would result from such a challenge would be a bit of a graze; Eboue's leg was bent and anyone who has played football can understand that this kind of tackle may look bad to the non-footballing armchair fan, but in fact it is nothing compared with a leg breaking straight legged tackle. In my opinion it deserved a yellow card and a stern ticking off. It is very rare indeed to see straight reds handed out for this kind of challenge. The sensationalist reaction from certain Gooners is quite surprising to me:

'one of the stupidest things I’ve ever seen on a football field.....outrageously dangerous tackle'

'Eboue should be sacked'

'He's a cheating, diving, fouling twat who can't do anything for our team that someone else can't do better.'

'Fuck off you idiot. He will never learn and however you might think he can improve he will always be a cunt on the inside and will continue to do these stupid things in games. Today’s red card just reminded me what he’s like, he had a chance to return from Africa and make a fresh start, but no.'
I could go on. Having said that, there has been a substantial majority of sensible and thoughtful comment from the Gooner blogging community.

Eboue is an idiot. However I don't think insulting him more than this is productive or fair. His tackle was stupid, however it was not a dangerous red card tackle, he was a little unfortunate to see red but he should never have given the referee the chance to send him off. Even if one accepts it was a red card tackle, then at least make your point politely without sinking to the lowest depths.

If Eboue cannot learn he may have to be moved on, Arsene knows this and I trust him to do his job. However do not make Eboue the scapegoat for all our troubles, there were eleven men on the pitch in the first half and we were three down at half time. Eboue has also not done too badly this season when he has kept his head, his partnership with Sagna has given us solidity down the right and he has helped in our charge to the top of the league. He does need to control himself better and he must improve his end product, however he doesn't deserve to be castigated as some kind of satanic scum. Do we really have to sink to these depths to make a point? Shouldn't we try to to rise above this kind of sensationalist tabloid journalism?
Posted by 1979gooner at 21:46