All to Play For in Milan 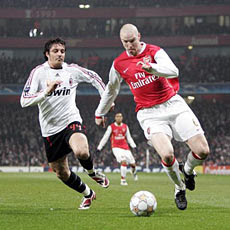 The 0-0 result last night did not reflect Arsenal's good performance last night against AC Milan, one of the true greats of European football. Although not at their best this season, form counts for little at this stage of the Champions League and AC Milan boast some players of true class - Kaka, Maldini, Nesta etc alongside some exciting youngsters, such as Pato (which I believe translates to 'Duck' in English).
However, the Arsenal team were more than a match for the opposition and some excellent performances were seen. Big Phil Senderos deserves a particular mention, who was a 7th minute substitute for Toure. Reports this morning suggest that Kolo twisted his knee quite badly and will be out for a month. We are now dangerously short of cover at the back, but if the current back four can stay fit then we should be fine. But thats a big 'if'.
The Senderos / Gallas partnership is also looking more solid at the moment than the Gallas / Toure partnership. Whilst this is no doubt down to the fact that Big Phil is playing well, I also wonder whether Gallas prefers the right centre-back berth that Toure usually plays in?
Following on from 1979Gooner's post of yesterday, Mad Jens did have a good game, when called into action. Also, his distribution when throwing the ball out to restart play was excellent.
Most of Arsenal's best chances came in the second half, when we played with genuine tempo and verve. The press point this morning to Milan's experienced defending in resisting the attack, and that was true to an extent, but our shooting was also pretty hopeless, with Eboue, Eduardo and Bendner all blazing well wide when decent shooting opportunities presented themselves. This generosity then came fully home to roost in the last minute of the game, when Adebayor's header hit the bar from two yards out.
Its a shame that we did not win the game but I have always thought that we would need to score in Milan, and nothing has now changed. The run to the final in 2006 was based on good away performances against Real Madrid and Juve in particular, whereas we were almost caught out trying to hang on to a lead against Villareal. So I think we are well placed against a Milan side that will have to come at us in two weeks time, hopefully offering us the opportunity to counter-attack.
Posted by Ted at 10:08

I agree, in that we definitely deserved more from the game than we actually got.

The above pic offers a bit of an explanation for Ade.

Perhaps you are right and we will have to play positively in Milan, which may be a very good thing, as going there 1-0 may be very dangerous as it would tend to encourage us to sit back a bit too much.

Come on you gunners!