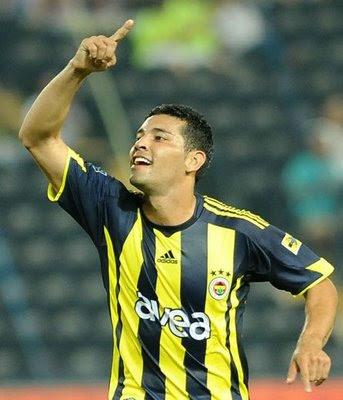 We already knew that Park Chu-Young was on his way, an experienced South Korean international with a decent record for Monaco, also pacey and capable of playing in wide areas if needed. This was a good start.

This evening the news is breaking that Andre Santos, a Brazilian left back, is to sign from Fenerbahce, provided the routine is completed tomorrow. He looks a highly gifted player with a cracking left foot, he has caps for Brazil and is apparently not too shabby defensively. At 28 he is also an experienced pro, his goal scoring record is also quite remarkable, averaging about 1 in 5 but he has played in the midfield a fair bit for Fenerbahce apparently.

It is also highly unlikely that these will be our final signings. I think a big name midfielder, an attacking midfielder and a centre back are all likely to also be on our shopping list. I can't remember the last time a transfer window was so breathtakingly exciting and scary, all in one. Certainly I don't think the club has been wise to leave all this to the last minute, but it isn't half seat of the pants stuff!

I hope you're right! As a lifelong 44yr old Gooner I've never felt as low as yesterday. Silver lining though, if he is shocked into buying. Even Silent Stan should realise the significance of yesterday's hammering.

Yes it maybe hard to say this but when it happened I thought this may be the best thing to happen to us.

I also believe that Wenger has made plans to buy people before now, I just hope they can fit in quickly.

This is all a result of the Cesc and Nasri deals being left too late.

Yossi Benayoun would be a great incremental addition but is no alternative to a world class midfielder which we need and have the wherewithal to sign.It has to be quality additions all the way.Bargain basement time is over

All 'super quality' no doubt.

If he's not going to practice defence it really doesn't matter.

i started supporting asnl from 1970 when i was a 14year old boy and have seen many arsenal teams and some fantastic times and some not so, however one thing was always the predominant factor in the club GRIT but sadly it is missing in a big way from the present team united scored some great goals but if you allow any premier league player that amount of time they will score spectacular goals and you have got to question all of asnl players attitude from the captain van persie senior players like rosicky seasoned central defender jhouro and the list goes on i am so gutted i have not been able to raise a smile even thogh it is my daughters 25th!!! to make matters worse my accountant is a cockney manc and the last time they beat us 6-1 he had the newspaper cutting plastered all over his office walls someone has got to sort out this mess if its the board then wenger must stop playing the meek servant and do his job according to his convictions and if its wengwer then the board must remind him of his duties to the club and the fans. nuf said

I have defended Wenger even after last seasons collapse. However, after the Liverpool game last week, I was worried, as that was the worst I had seen us play since Wenger took over, then yesterday's embarrassment happened.

Its time we got in a new manager if he refuses to address the needs of this squad.

However, the south korean dude and the brazilian are yet more cheap foreign cheapskate options that will get us nowhere

The club needs what it has needed for years;

Wenger needs to shape up or ship out

Why weren't these deals done in June? Park has been looking for a move all summer.......

Please forgive me if I am less than enthused by these supposed arrivals.

I do agree the need to sign players. But I've always stated that we need players with a proven pedigree at the top level, and preferably with Premiership experience.

Park, Santos, Mertesacker? While these players show the manager has compromised a bit on his trend of buying youth players and Ligue 1 players, they are not enough of a compromise in my opinion.

We need gritty winners that are self motivated, mature and able to dig out results from a internal desire to win. We need battlers that can handle the physical tussle match after match in England. I'm not talking about carthorses. And I'll give any players we sign a chance to prove their worth. But this still has the feel of Mr. Wenger trying to find a bargain.

Baines, Cahill, Agbonlahor, Rodallega, Bent, Samba, Fellaini, Tiote, Jagielka. These are types of players that would improve us. They walk into out first team, or at the very least adequately supplement us when we lose players to injuries, suspensions, ACN, etc.

But forget the signings that I approve of - just switch to 4-4-1-1 and bring in Keown to coach the defence and I'll belt right up.

Center back Per Mertesacker from Werder Bremen will be signed. German newspaper reports it as “almost sure”

Sounds a done deal then, as the Germans are only "reasonably confident" that the sun will rise tomorrow.

It's all erroneous the thing you are saying.