Reflecting on a shameful day 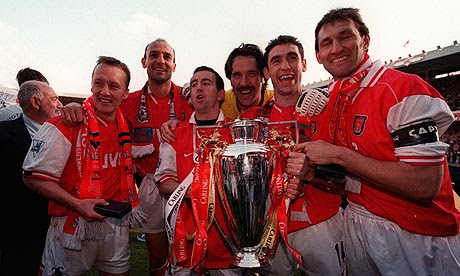 The gravity of yesterday's result and performance has struck me this morning when reviewing the game on the TV. That was a bad performance, it was far worse than bad, it was absolutely catastrophic. Our squad is an absolute shambles and the season is underway, we have one point from three games. Injuries and suspensions left us short, but no squad should be so short that it has to throw in so many raw youngsters into such a huge fixture.

Our squad is incredibly weak, we have sold big players and several useful squad players, while others have gone out on loan because no one would buy them outright and pay their full wages. We have only eight defenders in the first team squad, one is useless and is being frozen out (Squillaci), one is forever injured (Gibbs), one was injured all of last season (Vermaelen), one is injury and error prone (Djourou), one is useless (Traore), one is an inexperienced kid with talent and heart (Jenkinson), one is Laurent Koscielny who is relatively inexperienced and the other is Bacary Sagna.

So in a huge football club with a wage bill in excess of 125 million pounds or so, we have a squad with only eight defenders, of which very very few are experienced pros without injury issues. Our midfield is not in quite as bad a state as our defence but it's not much better, only a couple of injuries and we are down to untried kids.

Yesterday was a disaster that has been waiting to happen for some time, it was no freak result, we are down to the bare bones and this should have been foreseen, preempted by the manager and board. Ultimately one man has to take responsibility for this mess and it is the manager who is that man.

The defending was what one would have expected from a back four that had never played together, a back four with no experience, a back four with very little togetherness and defensive organisation. Still, there was no good excuse for someone like Johan Djourou yesterday, some of his defending was terrible for such an experienced player, he failed to attack the ball for the first goal, he was frequently not tight enough to his man. Armand Traore should be able to defend better too, he was truly terrible given the number of top flight games he has played (over 40).

It was the lack of defensive cohesion and strategy that worries me most. You could bet your bottom dollar that if George Graham had time to work with that back four for a month, then they would play a damn sight better than they did yesterday. Arsenal's defending looks as if it receives very little attention on the training pitch and if this is genuinely the case, it is absolutely staggering because we have been throwing away points for years now, points that would not have been thrown away if we could do the basics better.

I am a massive Arsene Wenger fan but although it pains me to say it, Arsene is now at his last chance saloon and if he does not see this then he is truly doomed. We need an absolute minimum of four more signings, after the arrival of Park. Not only that but he must start taking defending far more seriously and he must seriously think about appointing an experienced defensive coach who can go about drilling our defense in the some basics, to prevent disaster like yesterday from happening again and again in the future. Arsene, it is now time to change or be changed.

You didn't mention Traore ? Does that mean you don't class him as a defender ? Didn't look like he did much defending yesterday

The game went out all over Europe, the America's, Africa and the Far East. Wenger has known all transfer season Cesc and Nasri were leaving and we need CB's and done nothing. Hold onto your hats boys the world is going to laugh at us many more times this season - and what will the board do? Increase ticket prices next season. Our travelling fans were fantastic but the board will continue to rip them off

if this is what it takes to peompt Wenger into signing good players, we needed it. the only problem is that everybody knows Arsenal is desperate and we will pay the odds for new players. it's a shame we didn't see this coming.

I really don't understand why anyone still wants to support Wenger. His management of this squad has become shambolic! We don't need to sign two or three players, it's more like 4 or five!! It's just not going to hapen. Yes there were injuries and suspensions but as Paul Merson said yesterday, even a division 2 team would have defended better than we did against Utd.

I find it strange that no one has yet made mention of the fact that Arsene Wenger is depressed! This is evidenced by his inability to make any decision right now. It's all in his head and possibly related to his domestic issues! Won't say more!! The team is suffering as a result and will continue to until he has his head checked!!.

We should be told what/who really caused the incompetent handling of the transfers this summer both in buying and selling. It surely can't be all wenger's fault, it's a team effort. If anyone should be sacked it's Gazidis, he is the chief exec presiding over this mess. Kroenke (sp) should speak up and let us know his intentions/ambitions for the club. The more the club leavs in the dark, the more the rumours will persist. Emirates stadium sold to Spurs anyone?

The players have no fear of the manager because they are well paid and he doesn't appear to punish poor play.

Wenger has never been great at organising sides defensively. He has relied on midfield enforcers or players who can keep the ball in midfield to cover for the defence. Every year things get a little worse. The defence gets weaker, the midfield loses a player and the enforcers are not as good. Wenger is to blame for a lot of it. He bought Koscielny who gives away a goal a game and set the tone yesterday by being too scared to challenge Wellbeck. Fans (and Wenger) think he is good because he can play on the ball; he cannot defend consistently - the foul on VDV that lead to the winning goal v Spurs last year was schoolboy defending. Wenger bought and backs Djourou. Enough said. He bought Squillaci. Enough said. He bought an 18 year old right back when we have a brilliant youth set up. Why? We didn't sort out Clichy's contract when Gibbs is light weight and Traore is injured. We keep buying lots of players who are not good enough. We have spent a fortune on a 17 year old right winger who we simply don't need. Until Wenger buys solid English pros to add to his light weight beautiful footballers we will go nowhere. He is turning into a dinosaur and is being left behind. Look at the Manchester Clubs yesterday - they are light years ahead. One buying quality young players all of whom we should have been in for and the other with billions to spend who no one will be able to compete with. Worrying time ahead for Arsenal and, sadly, football in general.

Arsenal will not get any further than mid table this season - if we can even avoid relegation. The folly of not spending money will become clear to the Board when the revenue stops rolling in. They have failed to read the times, to realize that the world of football is now based as much on how much money you are prepared to spend as it is on good footballing management. For God's sake pay Tevez the friggin 150k quid a week - pay the right amount for Kaka, get Mertesacker in - stop taking on bargain basement crap like Chamakh! Wenger's adamant stand will spell doom for the club.

The dude is completely just, and there is no skepticism.