PGMO and the potential for match fixing in the PL 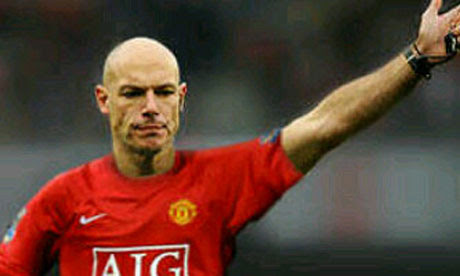 The Professional Game Match Officials (PGMO) are the body that employs all referees and they select which particular official referees a particular game:

"The PGMO look at the fixtures 6 weeks ahead, pick the right refs for the right games, then review this on a weekly basis. They take all factors into account, other games they have reffed, who they support, distance to travel, and in some cases international refs may have reffed in Europe during the week, and this all impacts on availability."

Howard Webb is refereeing today at Old Trafford and I will leave you all to read into this what you will. The point I am making is the process by which Howard Webb has yet again been selected for a Manchester United game is completely nontransparent and open to manipulation.

Mike Riley, who as a referee was notorious for being rather weak and giving Manu a string of dodgy penalties at Old Trafford, was appointed as the general manager of the PGMO in June 2009. I am not accusing Mike Riley of being corrupt by any means, I am just pointing out his history of being rather easily intimidated by clubs and players, he appears a bit of a 'yes-man', an all too frequent personality trait within football's governing bodies like the FA.

The process by which referees and other officials are selected for games need to be made far far more random so that it is far far less open to any bias or manipulation. Obviously the clubs supported by officials and certain time constraints mean that not all referees can referee every game. However the current manner in which a panel selects officials behind closed doors is so open to corruption it is not true.

The Italian match fixing scandal was far more subtle than many would have imagined, it involved a complicated network of cosy relationships between clubs and match officials, and a system for appointing referees that was open to manipulation. The current system run by the PGMO is just as open to manipulation as the Italian system, we have no idea at all what communication goes on between the PGMO, officials and clubs; in fact exactly what happened in Italy could be going on right now in England and we would have no clue.

We already know that the top referees are a remarkably warped bunch in terms of their geographical origin, this must have some effect upon their levels of subconscious bias against certain regions or clubs. Add this to the PGMO's nontransparent selection process and you have a recipe for one hell of a lot of bias, and potentially corruption. It is very depressing stuff indeed. I am just amazed that the mainstream media has never addressed this topic at all.

I like your point of view. I hold a similar one as well. It's interesting how no one is allowed to discuss the referees' performances after matches - after all the referee is a big factor on the outcome of any particular match. This is an important issue and we see obvious signs of bias quite often, but instead of implementing technology and more transparency, everybody seems to be content. Perhaps there is big bugs for everyone...?! The bubble will burst some time in the future though - as with FIFA. My prediction is dubious decisions will keep on happening in the future - will be watching the referee's performance in today's match for another confirmation of this theory.

Add to this the reluctance to employ any video evidence, a la rugby and cricket tennis etc., which I actually think increases the tension in the crowd, and which would take the pressure off refs at crucial moments of the game, and then take a look at those in power at fifa euefa and the fa, and voila......
Mark

It would definitely reduce error and reduce bias, plus take pressure off officials

There is no credible argument against technology now, the only argument is how much and how it is introduced

Please help me by reading my appeal on my profile

The serious possibility that there is bias amongst our referees that is ignored by the powers that be is one BIG reason why the respect campaign will not work and shows officials that are happy to target symptoms of a rotten system instead of tackling the causes.