The fact that UEFA have charged Arsene Wenger and Samir Nasri following yesterday's truly pathetic refereeing performance from Massimo Busacca makes it look like someone is deflect attention away from a rather corrupt and stinking organisation. Before I start on this rant, I am not saying Arsenal deserved to win, Barcelona were dominating the game before the sending off, however it is undeniable that Arsenal restricted Barcelona to very few clear cut chances before going down to ten men. The fact is that the sending off massively reduced our chances of going through yesterday and massively impacted upon the game's outcome. 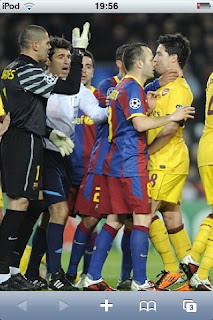 The fact that UEFA are charging Nasri and Wenger is a disgrace. The fact that several Barcelona players grabbed our players by the throats in plain view of the referee yesterday has been completely and utterly ignored by UEFA and the match officials. The fact that the referee dished out several extremely soft yellow cards to our players in the first half was also obvious, at the same time he let Barcelona off with some extremely firm tackles, far firmer than anything that our players had been carded for. He failed to book Messi for a clear dive, he allowed the routine feigning of injury to carry on for the entire game.

Busacca then sent off RVP for the most laughable of reasons, Jack as since spoken of how he couldn't even hear the whistle, RVP certainly didn't and the ref seemed remarkably keen to send him off. Arsene has quite rightly spoken out on this, frankly it was 'embarrassing', the hapless Busacca should be ashamed of himself. Unfortunately Busacca seemed to enjoy his role in Barca's triumph, he enjoyed laughs and jokes with the Barca players as he shared their water in the first half, not something he afforded to the Arsenal players. Busacca hadn't finished there though, he still had time to give Barca a dodgy penalty as the notorious diver Pedro pirouetted in the box after the mildest of gusts.

Arseblogger has summed it all up more eloquently than I can, it is clear that irrelevant of our performance or the so called statistics the red card massively changed the game, Goodplaya has also summed neatly just how incompetent the decision to send RVP off was. We had actually defended well until the red card, other than Cesc's stupid back heel that led to the first goal. We would have had a chance with eleven men on the field, we almost managed to snatch something with only ten men left, our chances would have been undeniably greater with the full compliment left.

The reason I am so incensed by this is that UEFA seem to be deliberately perpetuating this bias, whether it is a case of overt corruption or more of a subconscious one, I won't speculate, but the fact that it is only Arsenal facing charges stinks when several Barcelona players had our players quite literally by the throats. UEFA are part of this broader axis of evil that includes FIFA and the FA who seem intent of keeping football as corrupt and biased as possible, they don't want fairness, they don't want technology, they want to stifle all dissent to keep their corrupt little coven going. It is undeniable that keeping Barca in the competition makes far more money for UEFA, you just wonder how deliberate the lubrication of their passage has been?
Posted by 1979gooner at 17:47

Referee got it also to make all easy for Barça. Maybe they would have won this... But it's incredible how they are helped.... Always....

Yestarday Arsenal was beaten by the best team in the world: Busaccalona FC.
Guardioladri ("ladri" in italian is "robbers") :)

It's sad. Uefa's football is like a film with the end already written. It's isn't sport for me.

I try and not listen to talk sport but they are so against Arsenal.

If I knew how to set up a webb site I would ask all Arsenal supporters to sign a petition blanking the station and refuse to buy any of the goods advertised on that station and then when I had enough signatures send it to the advertisers, then talk sport might not be so anti Arsenal - when their advertisers are hit in the pocket and threatern to withdraw theri support

That was a wonderful piece and without mincing words you have hit the nail on the head with your detailed piece.

The fact is that UEFA would not have done this to Sir Alex, but only to Wenger lets wait and see what they will do to Wenger and Basri

PLEASE PLEASE if you are a true arsenal fan, do not ever listen to talk shite and if you have too, please do not give them the satisfaction of calling them calling yourself a gooner only to slag off our team at every given opportunity, I am more embarrassed by our own so called fans than any of our players, yes barcelona play wonderful football but they also get away with murder because of this,, alves is a c'##,and so is mascherano he was a dirty player at Liverpool and nothing has changed but his shirt, as for the ref 29 games for spanish teams and they have never lost with him there swiss neutral my arseblogger.
Keep the faith, what does not kill you makes you stronger, come on arsenal!

This is a referee who has handled Barcelona games on 29 previous occaisons-and surprise surprise 29 wins.
Hes a Barcelona man.
Every word of this post is right.
Even with this bias-and sending off Arsenals most dangerous player for nothing,we were one goal away from winning this tie-thats how fucking outclassed we were.
There is an enormous lot of crap spoken about Barcelona by the chattering classes-. The only time Barcelona were able to make possession of the ball count was when they could outnumber us in the final third after RVP was sent off.

the video shows it all.

Barca should have been kicked out after that.

Not only is Five Live crap, I am also Pi$$ed off with the overwhelming lets get up the Ar$es of Barca on so called independant SKY Sports, there commentator Martin (i love you Barca) Tyler just Pi$$es me off everytime Barca handled the ball, slagging Arsenal off at every oppertunity, I wish there was some competition for Sky sports, but sadly they are to powerfull, like Barca & there money for SWISS Refs!!!!

you right busaccslon fc won , remember their game against hercules at camp nou they were beaten 2:0 with 80% ball posession . if it was not for the stupid redcard arsenal would have gone thru

i agree with silvio. I fell in love with football and arsenal over the past couple of years, but it is a new sport for me. The sport itself - wonderful. But referees ruin it like no other that I am familiar with. Clearly, Barcelona (and newcastle before) were taking advantage to favorable referee to activiolently against Arsenal. In hockey, a player can stand up for himself and at most there is a 5 minute penalty. In football, the player has to do nothing and hope ref does; or if he stands up for himself he gets a card. A man off is devastating in football. Refs simply kill matches. That's the one thing I appreciated about Webb in WC final. I don't think he made all the right decisions, but he didn't kill the game either by sending off De Jong or Puyol (although probably both should have been by book).

The stat of never being beaten at the legendary White Hart Lane in any European Cup/Champions League clash remains strong. We won tonight without being anywhere near our best. Are you watching Arsenal?…… you Probably are! COYS

So sad that a yid posts their whopping 0-0 triumph over a piss poor team on an Arsenal site! Jeeeze FOYS.

What an embarrassing bunch of crap you write.

If RVP didn't hear the whistle then why did he shoot from miles out with his 'chocolate leg'?

I will make a donation to charity for every time Areenal drop points and 1979 does not blame the ref.

My money is safe.

p.s. can we stop the bullshit that the red card changed the game. Someone posted here yesterday that Barca only had three shots in the first half - totally wrong. These are the half time stats:

Those, my friends, are the stats of a first half thrashing.

Clearly it would have helped if we had played the second half with 11 men, but the insistence that we WOULD HAVE WON with 11 is simply unsustainable. We were thrashed with 11 on the pitch, we scored without shooting!

Grow some balls and admit that Arsenal were crap.

Yes, Arsenal were crap... AND the officiating was atrocious... AND were still ONE goal away from advancing and eliminating Barcelona at Camp Nou. So think of it that way, Ted.

I didn't even see the picture of Nasri getting grabbed by the throat until I saw it here. I did see the one of van Persie getting so grabbed.

Silvio could also tell you that, in Italy, Juventus are known as "I Ladri" -- The Thieves, for the many favorable decisions they've gotten over the years en route to 29 Serie A titles, reduced to 27 after the Calciopoli scandal of 2006.

Yes, we are watching, Spursfan. This is your 2nd time in the European Cup/Champions League in the 56 years it's been run -- 51 years of eligibility if the Heysel ban is included. For Arsenal, it is the 15th time, with a 16th already wrapped up -- and for the first 2, the rules said we HAD to win the League to qualify, and we did, the first time winning the League at White Hart Lane. So until your club gets to be a CL regular AND can win the League anywhere, much less at Highbury (old or new), you have nothing to say.

your spinning is not impressing me, you are competely changing you line of attack as the original line of debate is simply too strongly logically to be sensibly challenged!

I'm not saying we were better

I'm not saying we would have won

Your money is far from safe, in fact if you go back from the start of the season you will have lost on quite a few games, especially if you include the cup games as well

the stat of importance is that it was 1-1 and 3-2 on aggregrate when RVP was sent off, we were going through at that point

no matter how much you think Diaby is shit, no matter how shite you think we played, this is a simple fact and the argument is pretty simple, how about sticking to the point rather than digressing?

fuck you ted. fuck you and your whore mother

fuck your dad u son of a bitch. ur mum prostitute herself on ya uncle