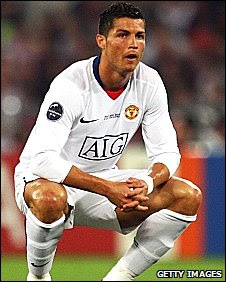 What a game, even if it was rather one sided with Manu only really threatening a makeshift Barca defence for the first ten minutes. Barca's lovely movement and slicky passing was joyful, especially when it made Manu look so very average for such long periods. Despite carrying ageing full backs, a central midfielder at centre back and a shadow-like Henry up front, Barca thoroughly deserved the win. Xavi and Iniesta were majestic, calm and elusive on the ball, at the centre of everything Barca did. Messi showed some glimpses of genius, Eto'o showed his athleticism and Valdes showed his speed.

Some of Manu's petulance in defeat was not in the spirit of the game. Ronaldo was the chief culprit with several barges, one thrown elbow and a rather dangerous jump tackle. Scholes' amazingly late tackle could well have been a red on another day. Having said that Ferguson was gracious in defeat and great credit to him for his hearty applause of Barca as they took their trophy at the end. Ronaldo looked like a toddler on the verge of tears because he hadn't got his favourite toy, his jeering by the Barca fans as he collected his medal did amuse.

Guardiola has stood out this season with his impeccable behaviour on the touchline, the likes of Mourinho could learn a lesson or two from watching him for a short period. He seems to remain calm whatever happens, dignified and polite to the extreme. Overall the reaction from both sets of players to each other after the game was very sporting, one just wonders if Manu would have been so graceful in victory.
Barca were unfairly written off in the English press, their performance has done the talking. The gloating sycomphants will not have their day, thank God. Personally I would like to say a big well done to Silvinho, a loyal servant who always played with great commitment for us, what a great end to his career. Well done also to Mr Henry, you now have your Champions League medal, it's just a shame it couldn't have been with us.
Posted by 1979gooner at 21:51

Well said 1979. A great day for English football. Very poor performance from Manure, who looked lacking without the workrate of Fletcher.

Oh. And fuck you Fergie.

Congratulations to Henry and Silvinho. Did Hleb get a medal? Whatever...

I thought Pique was very strong in the match as well. Heading out many balls played into the box and cutting out crosses. And Puyol was a terrier. He really played like a captain is expected to play.

Pique had a very solid game I agree.

As Ted days Manu missed the work rate of Fletcher in midfield.

I also think they were overconfident, when Barca scored Manu were stunned because they had not even contemplated going behind, they just assumed they would score first and win.

It got me thinking about how we lost to manu in the semi.

Personally I still think it was down to the pathetic performance in the first leg, nasri in defensive midfield, fabregas in the hole and diaby on the left with the lethargic adeabyor up front.

We should have gone for the away goal, I get Arsene regrets those tactics.

it put everything into perspective.

two weeks ago it was the Arsenal need more steel.

after yesterday, it's the beautiful game can win.

everyone has bad days, Arsenal had too many this year, but it was nice to see Man U have a bad game yesterday.

maybe Arsenal isn't that far off. with Arshavin and healthy Eduardo, we can have some more clinical finishing up front.

I thought Slyvinho had a great game too. the whole team did. Good for them.

When you write "Manu", I'm reminded of Manu (Emmanuel) Petit, who still to this day has the best song of any Arsenal player. I'm also reminded of that fool Eboue. Could you do me a favour and write "Man U" instead? Petit doesn't deserve being associated with them. Remember, this is the man who refused to contemplate signing for Spurs as it would upset Arsenal supporters. Please! Do it for Manu!

Great to see the right team win and with style,well done Barca!!It has put paid to the media's constant rubbish about manure's great team and for once the media couldn't come up with any excuses for them hahaha!!