Kevin Davies - not the sharpest tool in any box 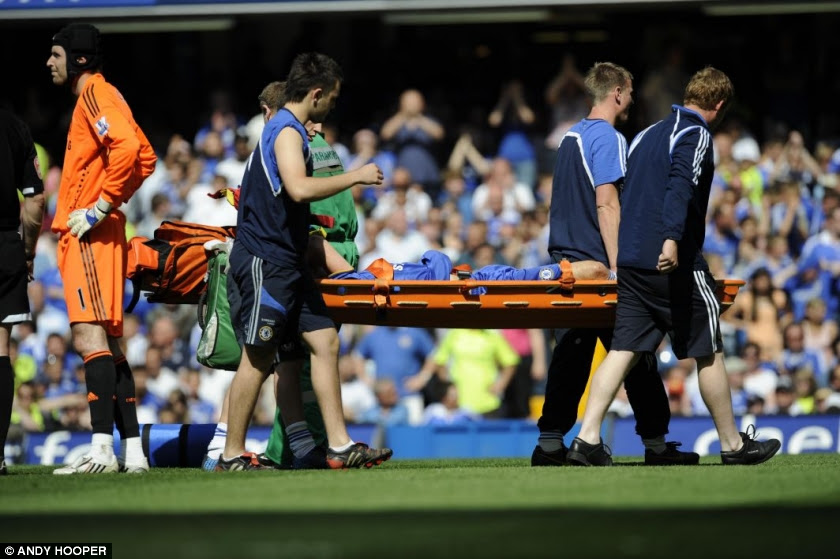 Oh dear, Kevin really should have engaged his brain before speaking out, but on second thoughts that probably wouldn't have helped a great deal given his limited grey cell capacity, you can't hold that against him though, he probably inherited the cranial vacuum from his parents, plus a little bit of Sam Allardyce's vacuum probably rubbed off on him too.

For those of you that missed it, Kevin Davies has had the nerve to speak out after Arsenal beat Bolton yet again and he's now accusing Arsenal players of trying to get Bolton players booked:

"A few of them let out a big scream, which is a bit embarrassing really because it is a man's game."
I think Kevin needs to be reminded of a few facts.

Firstly Kevin committed numerous clumsy fouls at the weekend and escaped a caution, while Arsenal players were booked for much less than he got away with, so this makes his comments all the more rich.

Secondly Kevin has committed more fouls than any other premiership player this season, and he's been near the top of the fouling charts every year he's played in the premiership, is this just bad luck or is Kevin a dirty thug? The facts speak for themselves really, he's also been guilty of some appalling elbowing of people's heads and reckless stud up lunges.

Well I'm sorry if our players scream as you lunge in with the tact and skill of a lumbering carthorse with your studs and teeth bared, but that's a normal enough reaction to an elbow or a tackle that has the capacity to break bone. I think merely seeing your face may be enough for some people to scream out for help, that's just a normal human reaction I'm afraid, I know it's hard for you that the ladies do it to you too when you stray out of Bolton, that's just the hand you've been dealt I'm afraid. It may be a man's game, aside from the fact that football is also now a woman's game- Arsenal are quite a bit better than Bolton in this branch too, however this doesn't justify leg breaking challenges or the reckless use of the elbow.

There are rules to this game called football, you and your thuggish Bolton colleagues seem to break these rules on a rather frequent basis, just because you call it a man's game doesn't mean you can break the rules as you see fit. Flying into tackles when off the ground and out of control with your studs up is a foul even if you happen to win the ball on the way through, you may wish to read the rule book at some point. Interestingly on the many occasions that I've watched Arsenal Bolton games in the past, the Bolton players have been by far the quickest to hit the deck with the most minimal of contact.

In fact I have seen the mighty tough 'man' Kevin Davies dive to ground when not even touched on several occasions, not to mention your current and ex colleagues such as El Hadj Diouf, Nolan, Giannakopoulos et al. It is strange that you are such 'men' on one hand when deliberately trying to wound your fellow pros with dangerous play, but you are such cheating 'women' at the other end of the pitch when trying to win a free kick.

I think this little outburst is a bit of a side show, isn't it Kevin? You are trying to move attention away from your average dirty Bolton side that has managed to get results over the years with these underhand tactics of fouling at one end and diving at the other. You are also deflecting attention away from your woeful finishing, as you nicely demonstrated on Saturday, and poor goal scoring record, plus the fact that your lovely Bolton side is sailing down the table at an alarming rate of knots.

You probably also hope that you can put pressure on future referees with your silly words, you learnt that from fat Sam didn't you, my how brainy of you. Finally it's amusing that your words come after a defeat, you couldn't be a sore loser who is having a little strop like a spoilt toddler could you? That's not very manly is it.
Posted by 1979gooner at 12:35

This is really calling the kettle black!!!as said davies is a big,fat ugly so-called player but seems to fall down quite easily when challenged especially against little old Clichy.The facts don't lie he's top of the fouls chart and for a striker is scoring record is dismal but then again it's seems to be trait from teams up north.
Prime example is man u,when beaten never give credit to the opposition but slag off the ref stating he was baised to the other team,should have had a imaginary penalty has ronaldo's or rooney dive was top class or the gem excuses there goal was offside(even if the scorer ran 50 yards from his own half with the ball)or we should have had a foul.
Davies is a outdated player he belongs in the fifties as his mentality shows or is it a case of i can do that but not you!?I sick and tired of these players bitching about us coz there were basically outclassed.Teams come to the Emirates put all 11 players in there penalty box get beat then critisize us 1 way or another.These are the teams who seem to consist of the most players who fall or dive when hit by a feather or lunge in with studs up with the intention to cause harm.Also the pundits don't help when they defend the actions of these players!!!
FOREVER-ARSENAL
EXILED-GOONER

indeed, pot kettle and all that!

agree on the manu intimidation, not only are they appalling in terms of abusing refs on the pitch, ie routinely abusing officials and surrounding them, but they continually put pressure on refs with their dodgy comments after and before games, mainly from 'sir' alex the chief intimidator

davies is an average footballer, he wouldn't even get in the Bolton side if it wasn't for his cheating and fouling, he's just frustrated that he's not good enough to do the talking with skill or goals

is this the same kevin davies who has scored more goals than your 'world class' strikers van persie and adebayor this season 1979gooner? all davies was sayin was tht it is meant to be a man's game and a contact sport, you can call him a thug or woteva, the fact is he was just calling ur soppy french clowns soft