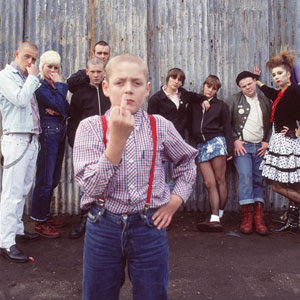 For anyone that's seen the film, you'll know what I'm on about, for those who haven't read on and I shall try to explain. This is 'good old' English football and it's not for 'jessies' as the grinning Shearer and Lawrenson love saying. This is 'good old' England where we just laugh as the reckless straight legged tackles fly, where we just get on with it as the tibias crack, where we don't see leading with a swinging elbow as a foul, where our regressive and violent game holds technical football back, where we blame those nasty foreigners for holding our cultured game back, after all it's much easier to live in denial than admit to yourself that you're just uneducated and xenophobic. This is England, be proud, support the BNP, drink nasty fizzy lager and read the fucking Sun.

As you can see I didn't agree with the ignorami on MOTD, Kevin Davies' tackle was shockingly bad, it was completely reckless and out of control, I'm just thankful Gael Clichy's bones are intact this morning, how on earth the moronic Shearer and Lawrenson can label it 'fair' on MOTD is beyond belief. It was irrelevant that Davies made contact with the ball, the ball doesn't matter when you show that much malice in the challenge, it's just typical of weak referees like Steve Bennett to bottle that kind of decision by failing to show the red card. It is this kind of limp refereeing that holds English football back. It wasn't the only decision the over sized gnome choked, Davies' nasty elbow on Toure was completely ignored as well, I'm sure Alan Shearer was proud of that kind of 'old fashioned' centre forward play; no wonder Bolton tried to bundle Almunia into the goal, Bennett was refereeing as if it was the 1920s, apart from giving free kicks for Bolton's theatrical dives that is.

Having got that out of my system, it was most enjoyable to hammer Bolton in such convincing fashion, I can't feel too much sorrow for one of the most negative and violent teams in the land, who else would comically reduce the size of their pitch in such a manner? Our youthful side did very well to stay strong and refuse to be intimidated by the typically over physical Bolton tactics. Bolton got their goal in the only way they know how, by fouling, firstly Almunia was barged in the back to win the corner, then Davies climbed all over Toure to win the header, lovely stuff Bolton, what lovely football.

The response to Bolton's finely crafted goal was breathtaking, the passing was suddenly incredibly direct and crisp, only a pitch one metre wide would have saved Bolton. First Adebayor hit the inside of the post when clean through one on one, then Song hit the inside of the post with a solid header from a corner, then the first goal, the direct Eboue slotted home nicely from a neat through ball. The second goal was the pick of the bunch, a brilliant little network of passes in midfield led to Denilson breaking through into the box in the inside left position, he then squared for Bendtner to slide it in from the edge of the six yard box. We looked comfortable until half time, Bolton did rally after the break, and were considerably helped by the inept Bennett who ignored numerous hacks from behind and flying elbows from Bolton. It's strange how the likes of Kevin Davies are happy to fly into tackles with studs up and a straight leg, but when tackled themselves they go down as promptly as if someone had left their pork pie on the turf.

So unlucky Bolton, maybe without a referee you might have had a chance, but with a decent one you'd have been looking a much fairer and more embarrassing scoreline. The most encouraging thing for me was holding things tight in the second half when Bolton had a fair bit of the game, the defence held firm, Almunia led well from the back and the midfield worked hard to keep Bolton under pressure. Song and Denilson are getting better with every game, while Eboue seems to have been reborn this season, Bendtner must be pushing RVP very close for a regular starting slot and Theo is simply sparkling. I hope we can keep this kind of performance coming, we need to stay motivated and if we are to work this hard every week, who knows what may happen come May.
Posted by 1979gooner at 22:56

Labels: Arsenal Bolton 3-1 this is england

I agree with most of your rant 1979Gooner. I hate watching Bolton play their boring, lacklustre, sometimes dirty, intimidating football...But I can't help watching them with a sense of Dejavu. Oh yeah, it's like watching the Arsenal a few years back.
The whole xenophobe part about blaming foreigners is barmy,but that is not an English trait, it's a world wide one, that of course doesn't make it right, but the whole moron tag - Sun reader, BNP voter etc label to give to someone who doesn't mind a tough tackle is a little strong.
I didn't find anything wrong with the tackle on Clichy. The fact that he had brusing shows that nobody meant to end his career, nobody meant to take him out, it just happened. He's an athlete, it's part of the job, crunching tackles... Well I agree with the ignorami then, I want to see crunching tackles, sliding tackles, 50-50 challenges. If I want boring as fuck football I'll watch Serie A. Or is that racist againts Italians?

Excellent performance again. If Eboue keeps responding to our insults with performances like that we shall have to start moaning about all our players. Fabregas can't pass and RvP's left foot is rubbish - there you go, I've started.

Its hard to believe that was the same team that played against WBA and Fulham.

I'm 50/50 on the tackling issue. Clichy got caught badly and Davies was flirting with a red card and could have got one, but it wasn't a definite red for me.

But I also agree with Si that the Prem would lose something if we become completely non-contact.

I agree there's a balance.

However Davies overstepped the mark with that tackle, it was a shocker.

I just ddin't like the way Shearer and Lawrenson were laughing about it, it wasn't a funny incident, it was a bad tackle and a pro almost had his leg broken, that's no laughing matter.

I agree that being xenophobic is a very common human trait, however it doesn't mean that we shouldn't try to be less xenophobic as a nation.

The media clearly react very different to incidents depending on who the offence was committed by and not what the offence was, that leads to ridiculous incostistencies and the farcical disciplinary system that we have now.

The Sun reading BNP supporting thing may be a tad harsh, but it's a very real part of out nation, like it or not, I'd prefer to take it on that stay silent.

The amount of times we've had to put up with those diving foreigners, those foreigners don't like to cold etc, it's not acceptable. It allows the English media to ignore our own failings which only means that we don't progress as well as we might as a nation, for example withe the English football team

For example as regards the national team, if people looked at the real reasons that we have so few technical creative players then we may make some progress, if we continue to live in denial and blame foriegners then we'll never progress.

I completely agree 1979, my only problem with the argument is that one of the best / worst tackles I saw last year was Flamini on Nani, when he flew in two footed, took ball, player and advertising hoardings.

If it had been mis-timed, it could have had horrendous consequences, but Flamster took the ball first and I don't think it was even given as a free kick.

If the tackle has to be judged independantly of its results, then it was a red card, no question.

As usual in these things, we also seem to have gone full circle. The FA's stance about 5 years ago was that refs should judge red cards purely on intent, not on the level of contact, so that reckless challenges could be cut out the game. I remember that Sol Campbell got at least one red for "intent", with no contact being made at all. I think Vieira might have got one as well.

The whole idea was derided at the time because (a)it failed to stop players making bad tackles when "going for the ball" and (b) it was far too harsh on players who actually hadn't hurt anyone.

Its a difficult issue and I can see your point of view, but I like the fact that in England the players will go for a full blooded challenge, knowing they risk a red card if they get it wrong. Is that too dangerous? It may be that it is.

Looking back in retrospect in the cold light of day that Flamini tackle on Nani was a red, it was dangerous and could have broken a leg.

I see your point, there is a grey area here, and it does come down to opinion, but Davies was definitely a red card.

The angle at which the tackle is made makes a fair bit of difference as well.

For example Davies was straight at the player's leg making it very dangerous.

If the angle of the tackle is more oblique then it's less dangerous, and if it's a blocking challenge in parallel to the player then it's not dangrous at all.

In this context Flamini's was more oblique and was definitely a yellow, possibly a red.

A similar tackle occurred yesterday when Kalou won the ball v Ronaldo but it was two footed with studs, at least a booking for me but not even a foul given.

ACLF has it nicely for me, the art of tackling is being lost, we are seeing far too many bad tackles.

More importantly, the future best centre back in the world has just signed a new deal!