What storm? Lodging it up one's critics derrieres 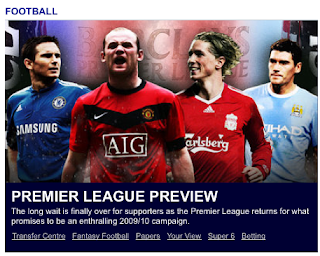 As usual I got things horribly wrong. An expected battle turned into a veritable stroll in the park, a lot of credit must go to Arsene and the players for dismantling a very decent Everton side so comprehensively. We saw pretty much the eleven we expected, Diaby's injury resulted in Denilson's start, while the tough decision was which two of three to start out of RVP/Eduardo and Bendtner. RVP and Bendtner got the nod, it's such a luxury to have a player as good as Eduardo on the bench, very sensible of Arsene not to rush him back to a starting spot straight away.

We had the edge early on, competitive in the fifty fifty challenges, something that frequently hadn't happened last season. As the half wore on we looked the more and more likely to win it. The first goal came after some excellent trickery and strength from Bendtner on the right flank, he fed Cesc who teed up Denilson, the powerful curler that hugged the top corner of the net was simply sublime, awesome hit and one nil.

The next couple of goals both came from free kicks, Everton were losing the midfield battle, second to everything, and this meant that they were giving away sloppy free kicks with their late lunges. Vermaelen powered an excellent back stick header past Howard for the second goal, and Gallas rose unmarked for the third. The Everton defence in all truth was all over the place, obviously this must have something to do with the want away Lescott and absent Jagielka, but the fact that Everton were under siege because they were losing the midfield battle was also rather salient.

The fourth goal came early in the second half when Cesc neatly finished off a classic counter attacking move, Arshavin had strongly held onto possession in the midfield, he then fed RVP who slotted in Cesc who did the rest. Cesc scored a solo fifth, fed by Almunia from a long throw, he ran unchallenged and fired home hard and low from near the edge of the box, appalling defending from Everton again. The sixth was a simple tap in, a slightly bungled Arshavin shot bobbled off the post and left Eduardo with a simple finish, a lot of credit must go to the striker for his instinct and hunger to be in the right place at the right time. It's the kind of chance that Adebayor would not have been anyway near last season, probably sitting down on the penalty spot waiting for the silver service like the lazy moron he is.

Overall a spot on performance and just what we needed. I've included Sky's promotional 'top four' photo as a motivational aid and maybe Arsene should put this poster up in the changing room in order to sput us on to the title. I know Everton were not at their best and inevitably this is the thing that the media will focus on, but in my opinion it was as much, if not more, about how good we were yesterday. It is early days and I don't want to get carried away, but we showed some signs that we have learnt a lot from last season's failure.

Vermaelen was outstanding at the back, he is a competitive and combative centre back who does not roll over for anyone, he lead the line well and our defence looked solid as a unit for once, catching Everton offside on several occasions with a well rehearsed stepping up. Song was as solid as a rock, hoovering up the loose bits in the midfield and protecting the defence well. Denilson put in a very good showing, doing a bit of everything well, while Cesc delivered playing in his proper position. Arshavin was quiet but he is like a sniper, hiding in the shadows and always ready to deliver a lethal hammer blow. Bendtner and RVP worked hard for the team as well as doing what they do best in attacking areas. Ramsey came on late and impressed. We looked like a proper team again. If we can maintain this kind of teamwork and work ethic then you never know what might happen come May, I hope we can ram that Sky picture up Andy Gray's obnoxious derriere.
Posted by 1979gooner at 10:08

MOTD had us as their first game and yet spent the whole analysis on Everton's defence and Lescott. Pathetic.

Spot on match report. It looks like 4-3-3 this season. As long as it doesn't turn into 4-5-1 then it might work well. It's interesting that Bendtner is playing right of the front 3 rather than RvP (who plays there for Holland). It looks like Wenger still doesn't rate his finishing.

My biggest concern is injuries. RvP, Eduardo, Rosicky and Walcott are all very susceptible to them. I think we're going to need to rotate much more this season to try and keep everyone fresh.

Still, I think any of the following could play in the new front 3:

When Sam Allardyce left newcastle, he said that without 100 million quid he would not be able to build a decent side.
Given that Arsenal has to make profits in the transfer market every summer, i am tempted to conjecture that if we did not have Arsene Wenger, we would be fighting for a mid-table position, sacking managers all the time, and failing... like spurs!
i am saying this now, because it won't always be like yesterday, and when we lose, we should lend all our support to wenger. All the misinformed supporters and the media will be against them.
bernardinho, from london.

What a turn-around from last year and coincides with greedywhore leaving maybe proved that he had a disruptive effect on the team??great performance and hope that we can continue in the same vain..but i know we can't do it all the time as we going to have our bad days but if we can apply the same attitude we could grind out results like manure did last season.

We showed fight,closing down,movement and kept attacking what a contrast from last year!!MOTD kept finding excuses for everton..which us gooners have to expect from the media..and was reluctant to praise our play but if we continue this way we going to get a lot of media crap..

I was at a wedding (no, not my own, nor the long-rumored Andy Gray-Ashley Cole nuptials), and my phone was getting zilch in the Internet reception department. I remember thinking, "Please, just one-nil, I can live with that." I guess enough Gooners were praying so that God granted six wishes.

Is it really so hard for the media to believe and accept that Arsenal are a great team? Seriously, why don't they like us?

Is it because our manager is French/German? (He still speaks better English than half the managers in the League, including Sir Doublemint.) Is it because of the dearth of English players? (So what, they seem to like being in England.) Is it because of the multi-racial roster? (Can't be, much-favored Liverpool has had some fine black players, and Man U had Eric Cantona facing such bigotry in rather imaginative fashion.)

Since Millwall aren't going to be in the Premier League in my lifetime, maybe we can use a sliver of the Adebayor cash to buy their slogan: "No one likes us, we don't care!"

At any rate, it was a spectacular opening, and cnut be he who chalks it up merely to Everton having an off-day. They didn't slip off the roof, they were pushed.

Bring on the Bhoys.

If anyone else had hammered Everton by such a scoreline then the analysis would have been very different.

Celtic is a biggie, we need CL football.

How great was Alex Song? He looked like a world beater on Saturday. He made some great interceptions and tackles. Our three midfielders dominated their four. Great showing by Mr. Fabregas, as well. Two well taken goals, two assists from our captain. Not much more you can ask for...

It's interesting just how many people who slagged him off a couple of years back have become very very quiet indeed.

Did anyone see the Daily Telegraph article saying that Arsenal are in for "culture shock" at Parkhead?

Riiiight... because our team has never been faced with four big walls of fans singing "You'll Never Walk Alone" and come away with a victory.

2-1 us. Celtic are a very good team and must not be overlooked, but even a Cesc-less Arsenal should be able to come away with a draw, and as long as it's at least 1-1 (or, better yet, 2-2), we'll be in good shape for the home leg.

What a load of crap, as if our players have never faced a hostile atmosphere before.

Firstly I have heard nothing but people blabbing about Arsenal's 6-1 win in the media. Five live, Talk Sport... Last week it became more important than the Ashes, so I don't know if you have a radio, but if you want decent sports coverage, most people know that you don't find it on the TV.
Secondly Song was no world beater. He still does all the hard work, crashes through tackles, stopping attacks dead, but then upon releasing the ball fucks it right up. He slows us down and I still don't rate him. Don't get me wrong he is much improved, but he is still falling far short of the standard that Wenger has set at Arsenal for midfielders.

Bit of paranoia I think from you boys about the Media not appreciating your 6-1 victory. How many clubs think that the Media love them? I can quite confidently state that the answer is zero. Every fan thinks the Media hates their own club and bigs up their rivals. Ask a United fan and they'll say the Media loves the Scousers, ask a Scouser and they'll say that they're the plucky underdogs, hated and vilified by all.

I'm a Chelsea fan and we think that the whole of the Media hates us and knocks out several sticky ones daily about the Goons playing the best football the world has ever seen. This despite the fact that you've won nothing of note for years now.

Those of you who think the Goons get a bad press - did you happen to see The Times the other day? The whole back page and the inside double page devoted to Arsene's view of the world. Frankly the whole thing was so siccophantic it made me want to wretch (even when Arsene admitted to lying about not seeing fouls - hmmm, odd how no-one in the Media has made a fuss of that one..).

So the moral of my post is please don't be conspiracy theorists. The media loves you and your sickening brand of trophyless, show pony football. They get together and have a collective group hug every time they see Walcott skin a defender or Arshavin play a slide rule pass.

So next time you're having a rant about Match of the Day or Andy Gray just remember, it's not Arsenal v The World. Though if it was I have a funny feeling that the Media would support you boys...

Our team has no big england star because Le boss doesn't read their passport book. Theo, Jacko and Kibb is not enough.