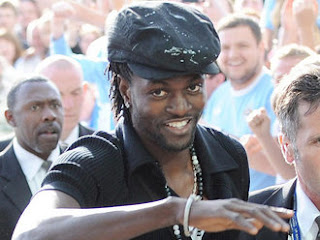 The fact that I am absolutely delighted that Emmanuel Adebayor has left the club speaks as loud as any words about the Togoan striker's departure, whatever the real reasons for the protracted nature of the transfer, whether it was down to Adebayor trying to move to a decent club or trying to extort yet more money from the club in the form of 'loyalty' payments, I couldn't care less, we simply do not need players who aren't 100% committed to the club. Arsene has commented on the news, obviously he would never criticise Adebayor in public after his move; personally I suspect Arsene is saying one thing but thinking another, just remember that this is the manager who dropped Adebayor at the end of last season and who publicly refused to rule out selling him to a Premiership club. Arseblogger's take on events is spot on, Adeabayor dug his own grave because he became too big for his own boots and too greedy. Cunning work Arsene, we have got rid of a lazy waste of space and replaced him with a large cash sum. I'm just looking forward to the egos interacting at City, how on earth can Hughes keep Robinho, Bellamy, Santa Cruz, Tevez and Adebayor happy without playing a suicidal Ossie Ardiles formation? I wonder.

The pre season campaign started with a 2-2 draw at Barnet, we should obviously be careful not to read too much into these early games as the main thing is getting match fit and not getting results. It was great to see Tomas Rosicky back in action, if he can stay fit then his presence in the squad will definitely be like a new signing, the same obviously goes for Eduardo.
The game saw two very different sides in each half, Vermaelen played the full ninety on his debut and as expected quite a few of our youth cup winning side got a run out. Luke Ayling looked solid at centre back in the second half while Sanchez Watt looked sharp up front in the first half from the highlights, the match report can be read on the Arsenal site here. The boss was pleased with Thomas Vermaelen's performance and he did show some glimpses of his defensive ability as well as his neat left foot passing.

Arsene's interview after the game was particularly revealing, he spoke Adebeyor being a great player without laughing, so his poker face was in action yet again. When asked how close he was to bringing anybody else in, he started off with one answer saying 'we are not very close to bringing anybody else in......' but then he paused and smiled, he then spoke with a grin on his face 'if you mean.....oh.....we are not on the verge of signing anybody'. I would be very surprised if Arsene doesn't bring in at least one more new face, he is wise not to admit this in public, as with plenty of money in the kitty he would be foolish to give anything away. It really frustrates me when people read isolated quotes from Arsene and completely misinterpret them, the big grin on his face said far more than the words on their own.
Posted by 1979gooner at 10:18

Cheerio Ade, I won't miss you. As 1979, Ted and Obsinho can testify, I always hated him.

Not convinced he needs to be replaced - RVP, Eduardo, Bendtner, Vela and Arshavin should be able to cope. We do need that new defensive midfielder but with Melo gone to Juve, Barry to Man City and Toure staying at Barc, I'm not sure who we can get.

Despite the 6 centre backs we now have at the club, I'm not actually that convinced by any. Another slight worry. I'm sure Arsene is trying his best but Ade out, Vermaelen in is not going to make us title contenders.

I don't share 1979's confidence in arsene's sly grin. We bid big money for melo (glad we didn't pay what juve did though as that is a lot of money for someone with 1 season in top football who is banned half the time) so we are looking, but arsene isn't a panic buyer.

He won't spend the money for the sake of it, and I am not sure who is around who would be a definite improvement. Our squad is fine, but is not title class. Saying that, not sure utd, Chelsea or Liverpool's scream as being favourites either.

I have to say I am in the camp that doesn't think we need to replace Ade. We have plenty of forwards and players who can play off of the main striker.

Bringing in someone like Chamakh or Oba Martins is not worth the punt that they might be successful for us. Plus bringing in a cheap replacement will signal the end of Jay Simpson's chance to make it at Arsenal. He's not really been given a shot yet and I think he deserves at least as much time in the first team as Aliadiere was given.

I'd like to see him have as much opportunity as Denilson and Song have been given. By that I don't mean I want him starting 75% of our matches. I just mean that we persevered through a lot of sub par performances from Denilson and Song before they started to look like they could keep up. Simpson deserves some time to show what he can do.

I look at players like Muamba and Sidwell and I feel that they were never given a fair crack. Had they been allowed more first team time at Arsenal, we might not have a need for a partner for Cesc right now. Speculation? Certainly. But I don't feel either of those players had any less ability than Denilson and Song do. But with Vieira, Gilberto and Edu in the first team, they were victims of bad timing.

Nope, I am happy for Bendtner to take over for Ade. And Eduardo, Bendtner and RVP can fill the forwards positions with Vela, Arshavin, Simpson and Walcott spelling them on occasion (and depending on formation).

If Mr. Wenger feels that we must bring in another forward, then I would prefer he bring in a proven top level goal scorer to elevate our ability to compete another notch. David Villa would suit ;-)

But a midfield foil for Cesc (or midfield destroyer in the 4-3-3 formation) is an absolute must. No other position in the team is as weak right now in my opinion (and many others opinions). If we don't bring one in, and a highly rated one at that, we can expect the same type of season as last.

I do think the arsenal will be title contenders this upcoming season.

It looks like it could be a very exciting race with any of five teams winning it.