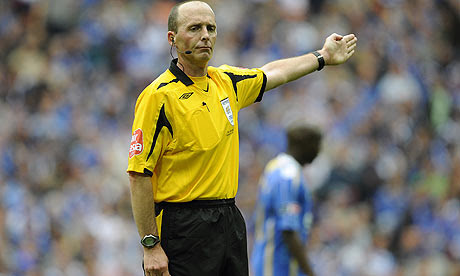 Firstly I don't deny we have our problems, of course we do, our squad is not strong enough, we have some gaping holes that need filling in this regard and City's squad is miles ahead of us at the moment.  Secondly I don't deny our defending was sloppy for the two first half goals we conceded today.  The problem was that Mike Dean killed the game today by a ridiculous decision to send off Koscielny early on in the first half and this decision was utterly pivotal in our defeat, to deny this is simply nonsensical.

I am sure that the many media numpties will use the above quote to justify the terrible Mike Dean decision.  By this logic pretty much every foul in the penalty would be a red card, as most penalty area fouls prevent a clear goal scoring opportunity.  The rule is certainly not black and white, it is inherently subjective, and the fact of the matter is that the type of foul committed on Dzeko by Koscielny virtually never results in a red card.  The fact that Dzeko himself didn't even know if it was a red card proves my point, players only say this when they know the referee has royally buggered up.

Kos held Dzeko back in the box, it might have been a yellow on a bad day, a straight red was an absurd and nonsensical decision to make.  The 'goal scoring opportunity' rule was brought in to stop the professional foul, when a man is slotted through on goal and is taken down cynically, this was most definitely not that, Koscielny simply held Dzeko back from a hopeful flick on that he was not actually going to get on the end of.  It was emphatically not the clean through on goal with time and space scenario that is meant by the rule book's phrase 'obvious goal scoring opportunity'.

It is a remarkable statistic that Arsenal have won just one game in the 17 games that Mike Dean has presided over in recent years, if the Premier League were not a corrupt organisation then this would be something that they would investigate, such is the statistical freak of this run of bad decisions.

I have lost all faith in the standard and consistency of officiating in the Premier League, and Mike Dean provided us all with a great case study of just how bad the problem is today.  He wrecked a game before it had really got going, he interpreted the rules wrongly with absolutely zero common sense and it is not the first time has has shafted us with a bad incoherent piece of decision making.  Mike Dean, you are a disgrace to football and you are symptomatic of the shabby state of refereeing and referee selection in this country.  Shame on you.
Posted by 1979gooner at 19:15

I agree with everything you said. That is all.

scumbag ref…as soon as i saw we had dean i knew we are 99.9999999995% likely to lose this match especially because everyone has been saying it has been 6 gaems and still no win for city at the emirates and hammering that in………as if to say wink wink nod nod they are DUE a win, they are owned by billionaires have stolen half of Arsenal players and still cn’t beat them its not good enough. That was 2 extremely dodgy decisions by dean and now Vermaelen has to be careful it is like he is systemattically weakening us not for just this match but for other matches knowing we have a lot of matches to play.

I find it funny how there hundreds of people that hold in the box but no penlty let alone a sending off and a penalty but eagle eyed dean sees it awards a penalty and sends our players off..how many ****ing manu scum players do this and nothing gets awarded and no penalty for the other team……..****ing farcial this league is!!

Why blame Dean? Even without the send off, Arsenal would have lost the game thanks to Wenger. Diaby wasn't fit to start, Carzola needs a rest, why is Rosicky not playing, why is Ramsey ahead of Rosicky, why has Wenger not bought a defensive cover after song left, too many questions for Wenger. The sooner fans start boycotting matches to protest reduced investment, the better for us all.
Wenger can't be relied upon anymore when he doesn't see the gap and how fast we are going to become a liverpool with his decisions.

The sending off killed the match. I agree as soon as I knew Mike Dean was referee I was concerned,apparenly the referee decided to go hard on holding in the penalty area. It happens every week at Stoke, now they have decided to do something. Was it clear a goal scoring opportunity! We now have Richard Scudamore,saying ticket prices are too high, as the CEO of the premier league,why has he allowed teams like Chelsea and Man City to buy success. The Premier league is no longer fair competition. Also I would be greateful if you would list the Arsenal games he has take charge re your stats.

I can't understand why mike dean have been allowed to make a fool of Arsenal in every game he officiated. Why must he still be allowed to walk with his two legs? He could easily have met with accident resulting in his legs being broken in many places. Kidding..ermmm..may be not! End of..

guys have a look at this, if this is not bias from the officials what is......it seems like we were destined to lose this game, this to me is very uncomfortable because there is definite prejudice in what he said.....he said it clearly also "go to your fans they paid £62 to be here" that smacks of at the very least disrespect!!

Our last year match with spurs scores Dean as an official celebrating says it all.

Is it even referee I will blame or who? This is not arsenal team we want. Pls beg arsenal fan not to buy ticket and not to watch our match again. May be the useless arsenal board with their useless coach, will change their mind, not to make money alone,but to make us proud of being arsenal fan with trophy. If you are the referee , you too will never want arsenal to win any match. If all the club is applying their method in the way they are signing, and be looking for cheap buying and selling @ high value of your best product, without replacing it with another,claiming they are expensive for them,because of their useless board profit bargain with the owner. How will the league be interesting if all the club are doing the same thing. Thanks to sir Ferguson and Abrahamovic with the Man city owner, who is making it lively in premiership. More support to you from referee and FA . To me now, Arsenal is not better than swansea nor tottenham or everton. We will see,with their tradition of big4 and second round spot in CL. That's the highest they can get every season. But I bet you if they didn't make the big 4 this time. No CL next year and the board will share the little amount they get and their eyes will opened. Nothing special about this arsenal team. When I see the coach, I dislike him more and more. Is it the same arsenal he used for unbeaten run, in the years back. You can get best player cheap,the way you get it then, because every club knows how to do it now. It is player that makes the club not name again. Pls tell the fans not to buy the ticket again so that the board will be watching their game alone.

One man to blame and that is the fool Wenger for his poor formation, his lack of tactics, his whole attitude to Arsenal is a disgrace, he is the one who ruined Arsenal, Kos was a fool, wrong side of Dzenko, TV at fault for the first goal, what a shit captain, Gibbs was poor, no desire, no heart no steel, same old Arsenal defensive errors costing us the game, nothing new, get that despot Wenger out

You're absolutely right about this statistic, I have always said that this man is anti-Arsenal, the only thing game we have won when he was in charge was the game against Tottenham, but in this match he also made ​​mistakes against us, first Gibbs should have had a penalty which he didn't gave, and Bale was diving and got a penalty, the question is why we won this game, because we scored 5 goals and Mike Dean had no chance of ruining for Arsenal this time.
It's not just the penalty situation and sent-off that was in favor City, it was the whole game, ex: Every tackle from our side was free kicks and yellow card while Citys tackle was just a free kick, our players could not complain about anything, and he threatened them with yellow card, while the City players could complain anytime without being threatened by Mike Dean, there are many other examples .....
And we all have seen last year when Tottenham scores Dean was celebrating. her is the video:

Finally, I believe that it is Wenger Arsenal's problems because he is no longer respected by referees, FA and own players, every player can leave Arsenal when they want without Wenger can do anything because he has no respect from anyone.

I agree with all you said. Just watched MOTD Alan Hanson said listen to what the Linesman said to The City Players " Well done lads go and thank your fans they had to pay £62 to watch the game" Alan Hanson agreed. How bias by officials and BBC pundits, bias or what

What a load of claptrap. You would have course said the same if Kompany had hauled down Walcott in similar fashion eh? nah thought not.

Of course, City committed several fouls that were worse than the one for which Dean sent off Kompany. So he will be suspended along with Koscielny.

Which means that Ferguson must have loaned Dean out to Mancini for only 74 minutes.

I've said it before, and I'll say it again: Mike Dean, Vladimir Putin's even more evil twin, is the worst sports official on the planet. And that's saying a lot, considering that the same league has Howard Webb (who was a bastard in the ManUre-Liverpool game as you might expect) and Phil Dowd.