The Premier League is getting less and less competitive 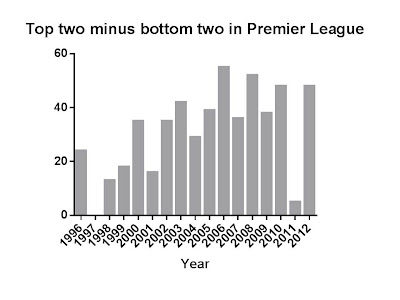 I have done some very simple graphs and statistical tests in order to test the theory that the Premier League is becoming increasingly dominated by the rich elite.  The first graph above shows the adjusted relative points difference between the top two in the Premier League and the bottom two; by 'adjusting' I have simply zeroed the points to make the graph easier to look at.  The second graph shows the adjusted relative points between the top two sides and the side in fifth place: 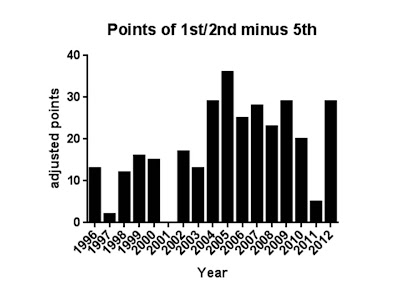 The third graph shows the adjusted points total of the top two sides: 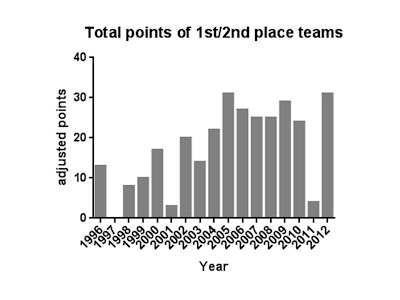 The trends in each graph are obvious, it is clear that the gap between the elite and the rest is growing over time.  I have also done some simple statistical tests to see if there is a significant (beyond 95% chance) trend over time of these point differentials.  Interestingly all three trends are significant beyond the 95% level.  The trends are worrying in my eyes as they show several concerning things are taking place in the top tier of English football. Firstly the elite are becoming more and more dominant in the league and this is relative to both the side in 5th place and the sides at the bottom of the table.

The Premier League is becoming less competitive year on year, and consequently it is becoming more and more boring.  The title race is becoming increasingly predictable and it is becoming harder for clubs to break into the group of rich elite clubs.  This is bad for the fans and bad for English football.  I rest my case.  Something has to be done about this in my opinion, UEFA's financial fair play won't help that much, we need something far more robust and tougher than forces more of an even playing field upon the clubs in the Premier League.

Good statistics. This sharing concept is a good way to enhance the knowledge pool about football.﻿ Thank you very much for this post.
premier league live