Back at the races 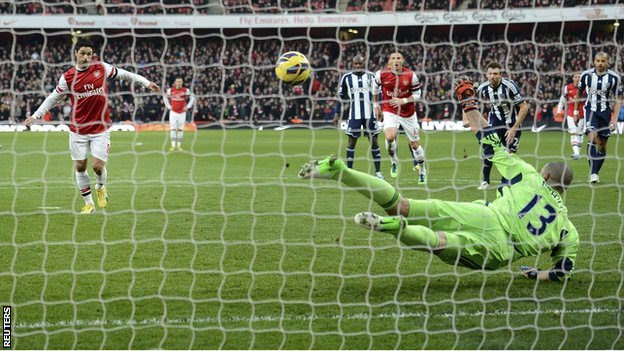 This was just what the doctor ordered after the terrible display at home to Swansea.  Although the victory was clouded in a smidgeon of controversy, nothing could really take away from the fact that West Brom were distinctly second best to an Arsenal side that had rediscovered a bit of attacking zest.  Steve Clarke may have tried to blame the defeat on the ref but this was merely to distract from the fact that West Brom were hammered, they managed only 2 shots on goal in the entire match.

The penalty that did not turn the game should never have been, Reid took a swing at Cazorla but made little if no contact, with Cazorla throwing himself down, not a penalty in a million years.  The second half spot kick was stonewall, Oxlade-Chamberlain was hacked down by Brunt, the claims that a foul was committed in the build up were weak, Oxlade-Chamberlain's pressing was perfectly legitimate.  Arteta showed a lot of character to step up and dispatch both spot kicks after the Fulham disaster.  The referee Jones was dire, so many wrong decisions, so many soft free kicks and very lenient in dealing with a lot of rather nasty cynical West Brom fouls.

The back four were decent, Arteta and Wilshere were particularly impressive in front of them, dictating the play and breaking it up as needed, while the work rate and pace of Oxlade-Chamberlain and Gervinho on the flanks really made a difference.  We had that bit more width and pace on the field, Giroud led the line well too, and some of the dynamic attacking play was very encouraging.  It was also heartening to see some more direct play with longer balls seeking out our wide forwards, the way we mixed it up with short and long play made it much less predictable than in previous home games, we must continue in this vein.

Unsurprisingly we did not miss Theo today, and there is no way we would have got the work rate out of him that we got from the likes of Gervinho and Oxlade.  That eleven is starting to emerge as our first eleven and hopefully we can now build on this much better performance.  If we need anything in the window it is some more pace and width in midfield and in attacking areas.  It would be good to see Chamakh and Arshavin out, and to bring in a couple of younger pacier fresher faces instead.  Well done the Gunners.
Posted by 1979gooner at 07:30