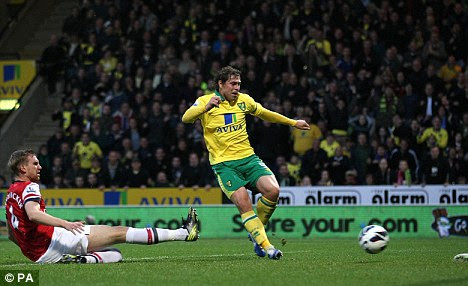 I have left it a few days to give my verdict on the Norwich defeat and I hope that taking the time to calm down gives me an advantage in terms of perspective.  It is easy to see things out of context and get overly depressed, not that I think it was a good performance by any means, it was not.  Certainly there were several factors in our defeat but I think it can be simplified down into a few key problems.  It is also worth remembering that we were not outplayed, we had a lot of the ball, it was more the fact that we couldn't convert our possession into chances.

The first point is that goals change games and the first goal is open pivotal, this was emphatically the case against Norwich.  It was also a very poor goal to concede from a defensive point of view.  Firstly Mannone's goalkeeping was awful, he couldn't hold onto a moderately decent shot and he palmed the ball out across his own goal, poor on both fronts.  Santos also played Holt onside, the rest of the back four were nicely in line.  Having controlled the opening few minutes conceding midway through the first half in such fashion changed the game, Norwich could sit deep and defend in numbers, thus making it very tough indeed for us to find space and break them down.

So having gone one nil down we never really created enough in front of goal, we did have several half chances but nothing that clear cut, so given the amount of ball we had why was this?  I think we rely too much on our full backs for width, the midfield three don't give us width, while our forward line can also be rather narrow.  This all adds up to it being too easy for Norwich to defend against us, our lack of width means that can defend narrow and in numbers, making things very congested and making it very hard for us to create anything clear cut.  The answer to this is to play with more width and simply apply pressure by hitting a lot of balls into their box from wide areas, eventually the pressure will tell.  However if you do not bombard their box then the possession may well not tell and this proved the case on Saturday.

So the bottom line for me is that we need to stop making such basic defensive errors as it becomes very hard to win football matches if one goes behind to such sloppy goals time after time.  It also begs the question as regards goalkeeping depth, I don't rate Mannone or Fabianski, I would like to see a better more experienced no2 at the club.  Tactically we also need to have more options at our disposal for when teams decided to park the bus, sometimes we need to stick two men up front, we need to have two wide men in the midfield and we have to change tack.  Come on you Gunners, bring on Schalke.