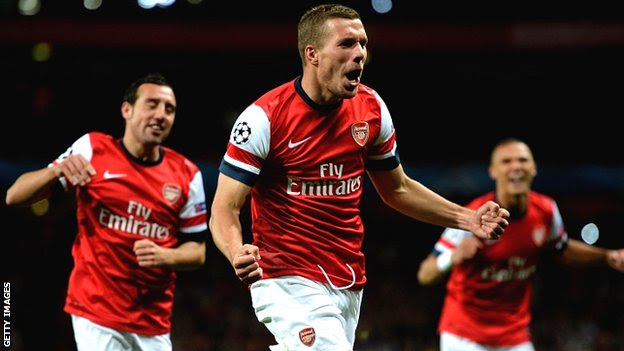 The starting eleven was pretty much what we had expected, le Coq coming in for Diaby in midfield, perhaps slightly surprisingly there was no Giroud up top though, Oxo starting on the right with Podolski and Gervinho making up the front three.  The rain poured and we showed some nerves early on when Mannone's bungled ball to Vermaelen amost set up a chance for Olympiakos.  The full backs started brightly and it came after a foul on Gibbs, that Cazorla tested their keeper's fingertips with a fizzing free kick.

We seemed to lose our way as the first half wore on, Olympiakos kept men behind the ball and made things tough, it resulted in us making several loose errors.  We had plenty of the ball but couldn't make it count, several corners came and went, but Olympiakos has the best two chances, one good save forced from Mannone and a missed sitter by Machado.  Kos was fortunate not to see red for a terrible lunge after a heavy touch, Vermaelen gave away another free kick by lunging in recklessly.

Then out of nowhere we took the lead, good work on the left by Cazorla and the ball came infield, it broke to Gerivnho whose touch and finish were excellent.  A rather fortunate 1-0 lead all things considered.  We then seemed to slacken off completely, thinking the half time whistle would just come, it didn't, Jenkinson stood off his man, a good cross was whipped in, Kos and Vermaelen were again caught napping, Mitroglou headed home and left Mannone no chance at all.  It was exactly what we deserved, we had been poor for most of the first half, defensively sloppy, too weak in midfield and lacklustre in attacking areas.

The second half began brightly, Gervinho's excellent work teeing up Cazorla who should have hit the target with his side footed attempt.  Shortly afterwards more great Gervinho work on the left edge of the box saw him centre to Podolski, who was now thankfully playing more centrally, and he dispatched the ball hard and low, in off the keeper's back side.  The second half had started so much better, the tempo was right, the ball was being zipped around as it should, rather a contrast to much of the first half.

Kos then missed an absolute sitter with a free header from about five yards out.  The game gradually faded away, we did look a good deal more solid defensively, Theo's introduction certainly made a difference, one cross was well captured by their keeper, another led to a decent Giroud flick that was well saved.  The Greek diving became rather tedious but the referee seemed to slowly lose the plot, gifting Olympiakos soft free kick after soft free kick.  There was still time for the unfortunate Giroud to see his goal bound shot deflected wide off a shoulder for a corner.  The final icing on the cake was Ramsey's expertly taken goal, he did a Henry impression and magnificently lobbed the ball over the keeper after nailing the defender for pace.

Overall job done, despite a dodgy first half, we showed good character to grind out a good win with a far better second half performance, and this was against a well organised side who made it very difficult for us to break them down.  The positives were Gervinho, the full backs, Giroud and Theo.  The negatives must include the dodgy defending at times from the centre backs, the shaky Mannone and our lack of togetherness in the first half.  Can't grumble though, six out of six ain't bad!
Posted by 1979gooner at 21:46