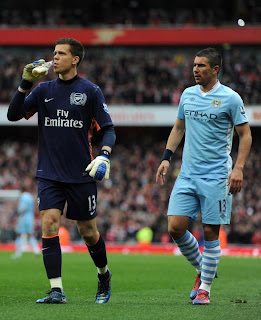 Cheers Wojciech (picture above courtesy of Younggunsblog) and well played Arsenal, a thoroughly deserved 3 points today against the money men of Manchester, even the most ardent of City fans would struggle to claim that we did not deserve the win today.  Arsene's big decision was to start with the same side that had humbled Tottenham 5-2, and starting Benayoun was a good move in my opinion.

We started well and had the bulk of the early pressure, our nearest was when RVP's flicked header hit Vermaelen and cannoned back off the crossbar, unlucky.  City lost Toure early on and this obviously affected them, Pizarro, his replacement, did little all game.  City did come into the game more as the half wore on but they never really broke us down, or got behind our defence.  Szczesny did excellently dart out of his box to sweep away the danger when it looked like City may have sprung our offside trap.  In the meantime Balotelli was lucky to still be on the field, a nasty lunge on Song was unpunished, then a nasty lunge on Sagna resulted in a yellow, he could easily have seen red before the half was up.

City didn't start the second half too badly either but they still failed to break us down, their only moments of threat came from free kicks and corners, Aguero never got in the game and their midfield struggled to offer much support to their strikers, so sad to see Samir Nasri with no end product.

We grew as the second half wore on, RVP so unlucky not to score with a powerful downward header from Song's cross, it rebounded back the foot of Hart's left hand post with the City keeper beaten.  City were on the ropes, our midfielders were everywhere like beavers, we gave City no space to breathe.  The work rate of Song, Arteta, Rosicky and Benayoun was outstanding.

It looked like it may not be our day, Sagna's expert low centre was hit firmly into the corner by Walcott's right foot, Hart magnificently tipped the ball onto the post, it rebounded to Benayoun who somehow scuffed the ball across the goal when it looked easier to score, and no one could force the ball home, was this going to be one of those days when the ball just wouldn't quite run for us?

With four minutes to go, Arteta strode forward, City backed off, RVP made a run towards the back post, Hart just edged towards the right of his goal, perhaps expected a cross towards our mercurial Dutchman, the ball sat up and Arteta let rip with an unstoppable tubthumping drive, 1-0 and so deserved, such a great goal.  City were dead on their feet, they had been comprehensively outplayed and that was that, Balotelli was sent off for a second yellow as he again clattered Sagna, this was immaterial, City were beaten.

It's funny how things go, Mancini has been given so much praise by his many lovers in the media but he's not looking so clever now, with all those hundreds of millions spent, is he?  Arsene got it right today, Benayoun and not Ramsey was the right call, the team gave their all and proved that football is about more than money.  Well done Arsenal and Arsene Wenger, a cracking three points, just need to keep things going and keep up this momentum for the final six games.
Posted by 1979gooner at 20:56

@anonymous 1
You're kidding right?
Try playing a third of the season with no full backs then come talk to Arsenal about injuries. Bottom line is your 'ahem' club has more money than God and still can't win the league, hahahahahahhaa

spend a few hundred million and then claim that because you had two players out, it's no victory!

if that's a serious comment, the joke is on you!

Love to watch over paid idiots (City) loose to a "Team". Final score should have been 4-0. Two points past Spurs! Gooner power.

Deserved win for Arsenal, City running on empty for four or five weeks now. Ridiculous to comment that a team, however, richly assembled, will not miss its best players when they are absent. Yaya and Silva do make the difference. However, Silva has lost form and power in recent weeks anyway, but Yaya is always a loss. This money thing wont go away but it becomes a little tedious when "poor little penniless" Arsenal start on about it. The top of the Prem is swimming in cash and that means all clubs at the top have buckets of it. Arsenal celebrating like they have won the Champions League after a 1-0 win over City tends to show how they have fallen in the last five years, more than anything else. Anyway, fully deserved, as I said, just go easy on the wild "we're 3rd in the league" celebrations! It doesn't reflect positively on your once great club.

"Ridiculous to comment that a team, however, richly assembled, will not miss its best players when they are absent. "

with respect, this has never been said on this blog

and if you bother reading the article, it mentions the significance of toure's injury

as anon 2144 it is rich of city fans to blame injuries with all your money, your huge squad and given how other sides have had way more injuries this season

so on that point, you are just completely wrong and make yourself look more than a tad pathetic

then on the arsenal celebrations, again very lame comment, belittling fans celebrating a victory is beneath contempt for me,

it doesn't tell you anything about our fans, or our club, other than the fact that we get behind our team and celebrate victory, what's wrong with that?

it tells you a lot about you though as a city fan, you are again trying to claim a moral high ground that simply isn't there, you'd do better to take the defeat like a man and not act the bitter loser

1-0 to the Arsenal and our team cost about a third of your bench!

nice posting.. thanks for sharing.