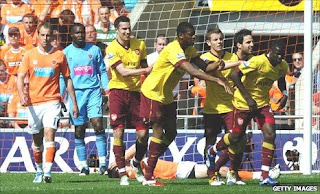 So the big news this morning is that Stan Kroenke is now the majority shareholder in Arsenal Football Club having agreed deals to buy Bracewell-Smith's and Fiszman's, this now means that Kroenke is obliged to make an offer to buy out the rest of the club's shareholders which is at 11,750 pounds per share. I would urge everyone who does have a share or a chunk of share to hold on to it, keeping our stakes is important. I have to say that Stan Kroenke taking over the club is definitely a better option that a fat corrupt criminal taking charge, fingers crossed he can be our benevolent dictator for many years to come.

Yesterday we needed a little bit of luck to defeat a courageous Blackpool side that never stopped fighting. Jens came in for the injured Almunia and one has to to say, that Jens played far better than Almunia would have done, he also lead and commanded as the Spaniard would not have done. The first half we dominated for the most part, Blackpool had a bit of early pressure but after that it was one way traffic. The first goal coming after some excellent work from Diaby, RVP fed the ball perfectly back into his path and Diaby tapped in easily. Eboue spanked in a cracking second goal after a neat one two on the edge of the box.

The problem was that we didn't finish Blackpool off from this point, we missed several great openings. RVP had a couple of very good chances, Nasri had one saved well by Kingston and the other unfortunately struck the foot of the post and bounced wide, Diaby took an extra touch when he really should have scored as well. This allowed Blackpool the room for the fightback in the second half. RVP looked like he could well have had a penalty at the end of the first half, strangely there were no replays when he was barged down just as he was about to pull the trigger when through on goal.

Blackpool got a foothold back in the game when Campbell was allowed to run clear in the inside left position, Eboue didn't track him, Squillaci was also at fault, ball watching and giving Campbell all the space he needed to run through on Jens. He rounded Jens, there was minimal contact, Campbell threw himself down, the referee played on and Taylor-Fletcher had a simple tap in. The talk of it being a possible red card for Jens were nonsense for me, he didn't even touch Campbell.

This wasn't the first time Blackpool had been caught diving in the box, there was a classic example of this in the first half, and it probably was the reason for Mason not giving them a penalty later on when Koscielny caught Taylor-Flecther late. It would have been harsh on Koscielny for me, it was a blocking challenge and the ball was long gone. The third goal from RVP made the game safe and we could finally relax, Walcott expertly controlled centre left RVP with a simple chance, one which he made look a lot easier than it actually was, a very well controlled left footed finish left the Blackpool keeper prayer-less.

It was a strange game, great to get the three points but I have to say I got rather frustrated at times with some of the defending and the way in which we kept shooting ourselves in the foot by giving the ball away all too casually in our own defensive areas. Eboue was great going forwards but a liability defensively, repeatedly being well out of position and giving the ball away in ridiculous areas. Squillaci was poor, he was sucked in towards the ball and pulled away from his right sided centre back slot too frequently, this left some massive holes in which Campbell was allowed to run unchecked.

On the positive one has to appreciate that this was practically a second choice back five, we have been hit hard by injuries in defensive areas. Jens was excellent, he must surely keep his place until Szczesny is fit to return and why not give him another year? His character and leadership would be a great bonus to have in the dressing room, Szczesny would learn so much. Other than one piece of dawdling on the ball late on, I thought Clichy was absolutely superb, he won every tackle, every header and was sharp throughout, a great shame that his late sloppy error almost cost us. Diaby had an excellent game, Wilshere was solid and stood up well to some rather thuggish opposition tactics, Cesc's passing was like a knife through warmed butter. RVP's movement and overall play was superb.

Overall we got the result and that was what we needed, three points, a big three points. Looking ahead at the fixture list we need to be winning pretty much every game to have a chance of overhauling United and that is what we must do. If we can get Djourou, Sagna and Szczesny back fit then our chances of doing this will be significantly increased. Hopefully Liverpool will tire themselves tonight and pick up a few injuries, it looks unlikely that Newcastle will do us any favours by slowing down United's points collection mission. Come on you Gunners.
Posted by 1979gooner at 09:04

Your biased bullsh't is a disgrace. 'Pool should have two pens at least but instead of your usual detailed (and clueless) tirade on the ref's performance, you gloss over it.

Thanks for that polite and constructive criticism Anony-mouse.

I love the way you argue your point rather than resorting to just aggressively and rudely telling people that you are just right and that the opinion of others therefore must be wrong.

If you can't express yourself in an adult manner with some kind of rational argument then sod off, with respect of course.

The Koscielny shout was the only one with any backbone, and I have explained why I think that wasn't given. The other shouts were pathetic and baseless I'm afraid. One was a blatant dive with no contact, the other a 'handball' with the arm in at the side.

I'd just like to point out that it is NOT strange that a replay wasn't shown of the Van persie penalty incident. I have noticed, over the past 3 seasons, that Sky do not show replays of certain decisions that may have gone against us, and they also do not show replays of certain incidents which may favour ManU. Incidents, that should warrant further scrutiny. But these are brushed under the carpet, and hence from our memories. It is, as I said, something I've noticed, and I only hope that some more people start to pay attention to this.


Also, don't ManU play City in the semi final on Saturday? Meaning we are effectively playing our game in hand against Liverpool?

Indeed, the game in hand is against Liverpool