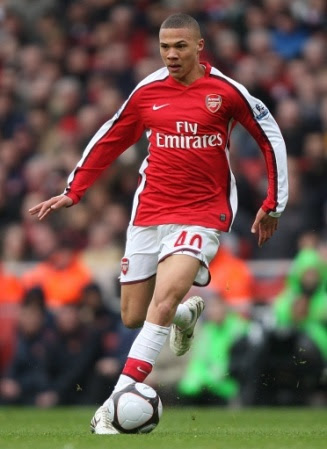 I know it's a popular time of year to tip one's stars for the year ahead and that's why I'm going to bore you with my Arsenal tips for 2010. There is not a massive amount of rhyme or reason behind this selection, some aren't far off being pretty much first team regulars, while others have barely played a first team game, I just reckon from the limited amounts I've seen a few of these lads might have what it takes.

1. Wojciech Szczcesny. Currently on loan at Brentford where he is impressing. This 19 year old Pole has looked the part from day one, he has a natural authority and strength that seems to exude confidence in all around him. He was top notch in our recent Carling Cup win against West Brom. With Manuel's form not 100% and Fabianski having never convinced me, I think if given the chance he may well grab it with both hands.

2. Kieran Gibbs. This young man has a grace and economy of movement that belies his years. If it were not for his unfortunate metatarsal fracture then I feel he would have made the left back slot his own by now. He has all the ingredients necessary for the modern full back, pace, strength, technique and an an excellent timer of tackles. Barring injury 2010 could well be Kieran's year.

3. Kyle Bartley. A naturally imposing central defender who got his first team debut away at Olympiakos in the Champions League recently. Despite being slightly caught out for the goal he did pretty well for such a young player in such a big game, I remember one absolutely bone crunching challenge with which he fairly took man, ball and all. He is a leader, has a big physical presence, comfortable on the ball and relishes the battle. William Gallas will not go on forever and I am sure Kyle will get one or two chances to impress over the next few months.

There are some other obvious players that I have not mentioned such as Jack Wilshere, Aaron Ramsey, Armand Traore and Fran Merida. The latter three have done particularly well when handed chances in the first team this year. When one looks at the numbers of talented players at our disposal then it becomes rather obvious that a lot of them will not make it with us and that is sad, but that is life. Vela and Walcott are probably starting to feel a bit more pressure to deliver consistently now, promise will not carry one forever. The likes of Mark Randall have definitely run out of time. As to whether there will be space for the likes of Lansbury, Simpson, Hoyte to impress looks very doubtful. Even below these kids is yet another generation of talent that includes the likes of Chuk Aneke and Jernade Meade, God I'm feeling like an old bastard.
Posted by 1979gooner at 11:35

Agree with those. I think 2010 could be Ramsey's year. There's got to be a chance that Cesc will eventually go and I think we have a ready made replacement already - he always looks a class act and in certain areas he's better than Cesc age for age.

Rambo is my big hope for the year. And also Alex Song - may seem crazy for a guy who has been player of the year so far (in my eyes) but I think he can blossom into a mythical "world class" player - ie someone that is rated on name by everyone.

A good ACN and world cup will see him really get support. A central pairing of him & Rambo could be a brilliant thing in 2010 - life without Cesc may be much less troubling.

I wonder what the odds are for Diaby to win FIFA World Player of the year 2010?

Its got to be worth a quid.

i know it was hull, and i know vela and walcott have been off, but it was fun watching them 2 and Ramsey attack Hull. the three of them are so young and as mentioned, the pipeline looks great

It is because of this pipeline of talent that we have that it is less and less likely that the boss will buy in the future. If he buys, it must be for very special players, like Arshavin.

It's amazing looking back to a post like this about the progression of youngsters in football and at Arsenal. With the likes of Wilshere, Ramsey, Gibbs and Szczesny now all first team regulars.

Who are the next stars coming through the ranks at Arsenal this year?