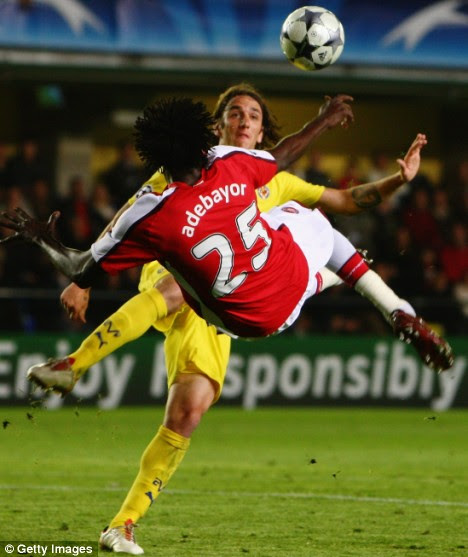 Firstly apologies if I'm repeating anything that Ted has said in his Wigan preview, I just felt the need to reflect before a busy weekend of Premiership action. The big news is obviously the absence of Gallas, Clichy and Almunia; the good news is that Gallas has not done his anterior cruciate ligament which would have put him out for almost a year and prevented him from moving on in the summer if that was so desired. It's a good opportunity to see if Djourou, Gibbs and Fabianski can rise to the challenge, the early signs have been encouraging, I just hope and pray that we get no more injuries at the back though, this could be absolutely disastrous, I won't tempt fate by mentioning the S word.

Unfortunately I could only listen to the game against Villareal on the radio, I then saw the highlights on the telly later. I was particularly struck by the gamesmanship of certain Villareal players, seemingly rather too keen to feign injury after the most minor of incidents, the classic example being Campdevilla's attempts to get Cesc sent off for nothing at all. This was in stark contrast to our attempts to stay on our feet despite some rather late lunges from Villareal players, it was also rather noticeable that they kept gesticulating for bookings with wagging fingers while we just tried to get on with playing football. I really wish refs would book players who openly ask the referee for bookings. Toure certainly seems to be finding a bit of form after a run in the side, this is great news. I am still far from convinced that Denilson does enough to be entitled to his regular starting slot in the midfield.

I am no economic expert, but Manure's financial results make for some very interesting reading indeed. Their holding company now has debts approaching 700 million, so even if one assume that they indeed worth a billion then this amount of debt must surely be a little bit of a cause for some concern? Their awful form of late is certainly a cause for concern, they were actually rather fortunate to escape with a draw against Porto.

The Chelsea-Liverpool quarter final was fascinating viewing, Chelsea thoroughly deserved their comfortable win and it really could have been more than the two goal margin that they take going into the second leg. Liverpool's defeat was especially satisfying as to me it seemed that they were trying to con the ref with several exaggerated dives to the turf while putting in some rather filthy tackles themselves. The fact that Liverpool were missing their defensive midfield lynch pin Mascherano was key for me, his replacement Lucas was woeful and Alonso was shown to be nothing more than a prancing ponce. It's funny how one often doesn't notice the best defensive players when they're there but when they're missing it become rather obvious how good they are.
Posted by 1979gooner at 08:00

Well said 1979. Many things about Villareal were unsavoury - persistent diving, asking the ref to book players and then throwing missiles at Cesc. It would not be tolerated at English clubs in the champs league and even the Championship is trying to clean itself up now.

Manure's accounts are interesting. The football club apparently made a lot of money (approx 88m), whereas the holding company lost a lot of money (50m). The net result is a much smaller profit for Manure than the papers will suggest. It also appears that they make no attempt to repay their borrowings - it just rolls over and eventually gets refinanced.

Arsenal, on the other hand, are repaying their debt and are aiming to repay the banks within about 15 years.

If Manure were to do the same, then I reckon they would need to be roughly doubling their repayments to bout £90m a year, which on this years accounts would wipe out their profit altogether, and would instead create a net loss.

I was amazed that the Sky deal managed to nudge 5% beyond the previous one, but that was the smallest increase in any negotiation for the TV rights deal. Manure's shirt deal is up next year and Prudential are tipped to be leading the bidding at the moment. Again, it would be very surprising if Manure managed to beat the AIG deal.

Liverpool are going to be an interesting watch over the summer. They HAVE to refinance in the summer and the money simply is not out there at the moment. Unless a rich Arab steps in, then they are fucked in the summer. With some luck, so will Manure next year.

It really could happen.

Mate, your hatred of Alonso is incredible, did he used to chip away at your missus back in the day or something? If he played for us you'd love him.

I don't hate him, just think he's very very over hyped for someone who is a good passer of the ball and nothing more.

He can't defend, he can't tackle, he has no pace, he doesn't score many goals, he won't beat a man.

The Gooner calls for Alonso are so so misplaced.

Man Utd are in real trouble if they don't win a big trophy this season because they're massive debt situation depends very much on them getting big trophies. Another blogger pointed out that no one will have the guts to tell Ferguson that there's simply not enuf money for him to splash in the transfer market in the summer, which is why the owners are desperate for him to retire.

Gareth Barry, on the other hand, has had a fine season. I was very impressed with him in the Villa game against Manure - best player on the pitch imho.

I wouldn't sign Barry, but I am beginning to see why Rafa would want to swap him for the useless pile of shite that is Alonso.