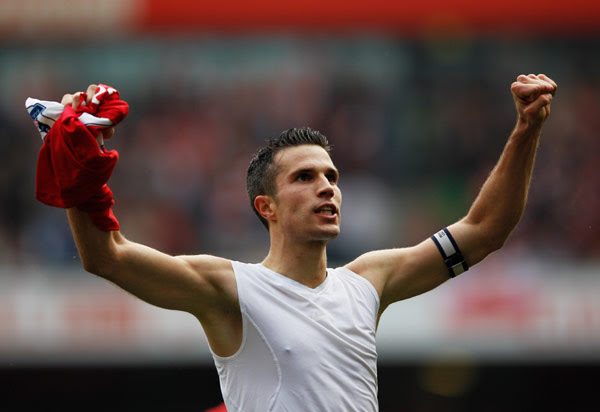 Football has been slowly dying for several years now, the sporting element to the game continues to diminish and is replaced by the ugly face of rampant selfish greed.  The inequality in terms of money and the domination of the elite few is not only resulting in the league becoming less competitive year on year, but it is also resulting in human nature's worst side being exposed in the form of the stupid money grabbing players who are driven on by their even greedier blood sucking agents.

The London Olympics was an absolute breath of fresh air, despite the corporate logos and merchandising, the vast majority of the sport on display retained the spirit, the sense of fair play and sportsmanship, the passion and the soul that football is so very sadly lacking these days.  Merely competing and representing one's country seemed to mean so much to so many athletes, it really was a fantastic event and was such a stark contrast to football's soulless business model.

Robin Van Persie is joining Manchester United.  He is perfectly entitled to leave if he wants and it is a great fee, the problem is that Van Persie has deeply embarrassed himself in the manner of his departure with that pathetic selfish statement.  He betrayed a club, manager and set of fans who stood by him through the thin, and there was a lot of the thin, he was injured a hell of a lot, but people kept the faith in him and he delivered in the end.   The statement was a selfish insult to those who had supported him throughout his time at Arsenal.

I won't insult RVP and I won't hate him, hate is a pathetic emotion that only destroys the person doing the hating, I merely feel sorry that RVP has made this poor decision, he has shown his greedy selfish core and that saddens me.  He could have become an absolute legend at Arsenal, instead he has destroyed all that he has built, he may well win a fair few trophies up in Manchester, but in my opinion he will look back on his decision with regret when he is older, wiser and has the advantage of retrospect.  Money or trophies cannot buy respect or cult status, RVP has let himself down with the manner of his exit this summer and that is why many of us feel let down.

On the broader topic, I am really struggling to love football these days, it is nothing to do with winning trophies I may add, frankly I wouldn't mind if we didn't win anything for many more years, it is more serious than that.  The game, the sport of football appears to be dying in front of me and I do not think I am alone in thinking this, the Olympics has allowed many of us to zoom in on football and see what an ugly greedy beast it has turned in to in recent years.

Sport should be about fun, sportsmanship, competition and healthy rivalry.  There is so little of this left in the modern game of football.  We have rotten corrupt greedy governing bodies, we have massive financial inequality that is resulting in the domination of a few bankrolled clubs at the expense of exciting competitive action, a despicable level of dissent is rife, there is a rank lack of on the field sportsmanship, there is so little loyalty, there is so much vile hatred from supporters.  I struggle to see how football can claim back its soul.

Couldn't agree more. I use to adore watching football and my favourite Arsenal. I am 67 years old now and I dread the Saturday evenings here in Singapore because that's when EPL is telecasted. So I drown myself in any pub that I happen to be close by. I cannot bring myself to watch the pathetic state that football currently is in. From the governing body and it's selfish bunch of self fulfilling officials where even the elections are rigged. To the referees a bunch of erratic morons who cannot even see the obvious despite the extra help and modern technology. To the money grabbing players and their parasitical agents and lastly club management themselves...

To the fans I feel sorry for you guys dishing out hard earned money and loyally supporting your clubs come what may.

Well I am glad that I have outlived my usefulness to football/soccer. I now read and busy myself with physical exercise instead of being a couch potato week and week out.

Well said, I am not sure that Manu will be ahead of us in 9 months time. Will Rooney pass to RVP?

Excellent blog and it resonates far too easily with my own feelings, sadly.

I have been watching Arsenal now for over 38 years, regular season ticket holder over 29 yrs and I feel football is detached from me now. The players and clubs treat the fans with contempt. Then wonder why we feel so upset with their behaviour.

One day, very soon, the clubs and authorities are going to wake up and realise its all over as we fans become slowly disenchanted with this beautiful game now corrupted. It is slowly but surely dying.

From FIFA to agents it is a corrupt environment.