Disappointing not to win but no crisis! 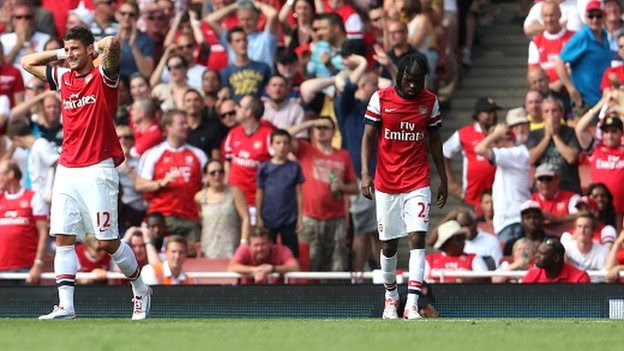 It was just as many of us would have expected, Sunderland were efficient and organised, we dominated the possession and the game, created a fair few chances and on balance should have won the game.  Unfortunately we couldn't quite finish Sunderland off, credit to them for their organisation and a decent goalkeeping performance, and we need to sharpen up in front of goal too.  The major positive was the fact that Cazorla sparkled.  It was certainly no disaster and a crisis?  Well, don't make me laugh!

I think many of us are far far more optimistic than at the same time last year.  The club is on the right track, the signings have been excellent and if, with Song leaving, they can add the right players on top of the bunch we already have, I think we will be significantly more dangerous this season.

Briefly on the Song situation, he simply has to go, the way he has behaved like a spoilt brat and tried to bully the club into giving him more money via some dodgy tactics using his agent is deplorable.  We do not need idiots like him at our club, especially when on considers that a significant problem we have had in recent seasons is complacency against smaller sides, Song has been a key part of this complacency and lack of discipline in my book, good riddance.

The media love to bash Arsenal because a large number of footballing hacks are a bunch of pathetic corrupt charlatans.  This has been perfectly demonstrated by the rank bias shown by the gutter dwellers on Sky's Sunday Supplement.  The BBC have not impressed with their faulty match statistics, 52% possession for Arsenal?  That is just plain wrong, very poor indeed.

It is funny that Liverpool are not in crisis, and it is also amusing how Pardew's despicable shoving of an official has been largely glossed over by the biased cronies in the media.  Imagine if Arsene had shoved an official?  The FA would throw the book at him.  However when Di Canio pushed a referee, he was rightly punished severely, yet when Darren Fletcher shoved a referee when playing for Manchester United the media didn't even comment.  We have a pathetic bunch of corrupt hacks in this country, they simply treat people well if they are given gifts and favours, hence it won't surprise me if Pardew is treated leniently.  The FA should throw the book at Pardew, pushing an official is wholly unacceptable and is a real disgrace to football.