Get Robbie Savage off the BBC 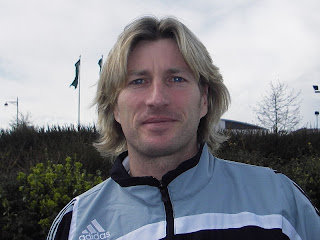 I will keep this short and I will keep it sweet.  I was wasting a few minuted on Twitter this afternoon when it was pointed out that Robbie Savage is a complete waste of space as a football pundit, I couldn't disagree, I find his unique brand of stupidity and speaking without thinking particularly offensive, in fact I often turn the radio off when he is involved in one of the phone ins.

It got me thinking, why not put some of my rage into a campaign that could actually have a chance of affecting some change to Robbie Savage polluting our airwaves and TV screens?  Why not indeed.

I have created an online petition here at gopetition.com and I would urge all of you to sign on, forward it to anyone that you may know, stick it up on Twitter and Facebook.  Let's get as many signatures on this as possible, I shall then send the results to the BBC and pressurise them into getting rid of Robbie Savage.  Enough is enough:


"I have had enough of his presence on our airwaves and screens, and have been forced into action as a result. I would prefer the BBC to spend our money hiring an inanimate object or small furry mammal that would provide an equivalent footballing insight without being so very offensive, this would also save the tax payer a significant amount of cash."

Haha, I personally don't think he's that bad! Let's be honest, football punditry is the province of uneducated buffoons feigning a small degree of expertise. At least Savage has a sense of humour.

I'm more irked by the likes of hansen and shearer. I heard they pay hansen like 4m a year!!! HOW IS THAT POSSIBLE?!! I'm sure savage doesn't get anything like that.

And apparently they're thinking of cutting the football league show to save money. Get rid of these vastly overpaid dinosaurs I say! I'm yet to hear a piece of analysis I could not perfectly easily have come up with on my own.

I hear Robbie Savage is starting a petition to get you off the Internet, can't wait to sign it.

Please, summed up by the stupidity of your comment, two peas in a pod you are!

If you genuinely a Savage fan then that is a pretty sad indictment on you, he represents the most mindless gutter sensationalism the media, getting ratings for saying stupid headline grabbing things is more important than quality and objectivity, truly pathetic gutter journalism

Quite agree, these massive sums are such a waste of cash in the context of cutting important programs like football league show

Petition.Do me a favour.Why not start a petition for Wenger to spend some money.If you dont like Savage dont watch him.I dont like Eastenders do you think i watch it?Get fucking real

Savage is just the latest in a long line of footballers desperate to add some additional earning years to their careers and happy to help turn the BBC into some effort at replicating the incredible banality, obviousness and lack
of insight proferred by sky and talk sport. Savages career was indulged by a series Charles Hughes inspired lowest common denominator managers who, in the absence of any managerial talent needed such a player/players with limited talent but an infinite capacity to run around and kick people in order to keep themselves in a job. Such managers are the ones responsible for the stunning poverty of the general level of English players and the national teams achievement. And after a career of kicking and diving, we are expected to pay for them to be apologists for narcissistic, self obsessed thugs like Barton who in any reasonable society would be shunned for being the anti social lowlife they are.
It's really just not good enough.

And please get him off ESPN as well, he is just effin moron an stupid C*** with the capital C.

you should be ashamed, how sad must your life be to try and get someone you have never met sacked?

You're sick in the head, do something useful you arrogant little boy

I quite agree-Savage is employed by the BBC because he is regarded by them as being a celebrity despite being an argumentative, inarticulate idiot incapable of analysis or expressing a balanced opinion. I am sick of hearing excuses for bad tackles and dirty play from him just because he had no skill as a player. Get him off the air.

Sadly-many of these comments in favour of Savage demonstrate one thing-idiots like idiots. There are local radio hosts up and down the country who are 10 times more insightful, articulate and capable of analysis that this idiot-but it seems people would rather ha celebrity-even if he is a complete idiot.

Robbie Savage is a complete prat, he has no idea what he's talking about. he's better off doing something with some sheep somewhere in wales. I can't stand his anti Arsenal comments. Hansen and Shearer are least knowledgeable about the game. Even as player Robbie Savage totally sucked, he most of time kicking oppenents, picking up yellow and red cards then actually playing football. Anybody who thinks in favor of Robbie Savage seriously needs football educating.

Only idiots like idiots, and these idiots supporting Savage just show themslves up as the brainless morons they are

Savage is the epitomy of our shallow celebrity culture, where idiots like Savage can command attention

I don't like Savage so I avoid him. If someone wants to give him a job to speak on the radio, so be it. If he was as unpopular as you say it would be bad for ratings so they would ditch him, but they don't. He has freedom of speech, just like you have freedom to type your idiot thoughts on the internet. Petitions my arse, what a sad wanker you are - get a girlfriend or something.

you may be a complete ignoramus, but don't force me to comply with your idiocy

the BBC is funded by us, the tax payer, it is a public sector broadcaster, hence your argument is 100% jibberish

fortunately the BBC have to take notice if hundreds of people want Savage off, as we fund the BBC!

Complete prick as a footballer. Same mould as Joey Barton, Marlon King, and Craig Bellendamy, based on fact he shoved his unevolved mutant thumb in to another players eye socket. None of them should be given any further coverage. Savage = C***!!!

Wow, your wife left you or something?

Get a hobby, he's a laugh..take that over someone who won't give an opinion either way.. doesn't take himself seriously either.

He doesn't really bother me he does make some silly comments but don't they all?? He's just there's really dnt have a massive dislike. You probz disliked him as a player therefore have just followed that through maybe?