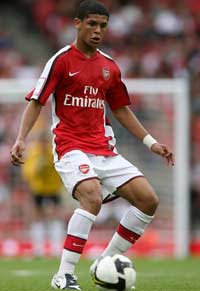 So the deeply average Denilson, frankly I can't be arsed with his full Brazilian name, is to leave us and shock horror, he is not going to be joining Chelsea or Manchester United. He has spoken to the Sun and said a few rather silly things, he has also shown us that he is verging on the delusional.

Apparently Denilson is a 'winner' in his own words, how he has worked this out is not mentioned, several years distinctly average displays do not a winner make in my opinion. He is not useless, I do not intend to insult the lad, the problem is that he is simply not that good at anything. He is not very quick, he is poor in the air, he is very weak defensively, lethargic even, his passing is ok, his long range shot is decent, he is no dribbler. He just hasn't developed as many of us would have hoped, putting in bluntly Denilson just isn't good enough for Arsenal Football Club.

Chelsea and Manchester United, and even Spurs, would not want to touch Denilson with a proverbial barge pole, he is just not up to it and this has been clear for some time. The final straw appeared to be his half time withdrawal away at West Brom, but the signs had been there long before that, many of us wanted him shipped out well before that. There is no doubt that after 153 appearances for us he should be doing a lot more in games, he is consistently a weak link, opposition players walk past him as if he wasn't there, defending and attacking are not his strengths.

I hope this is the start of a proper spring clean at the club. There are several other players at the club who need to be sent packing. The whole squad need a kick up the arse, the complacency that we have seen at times this season needs to be stamped out ruthlessly and clearing the dead wood is a great way to start this process off. Farewell Denilson, I wish you well wherever you end up but fear that you will drift down the food chain from here, because frankly you aren't really that good.
Posted by 1979gooner at 11:52

Well if he moves to Italy he will do just fine with all the other average players in that Crap League they call the Serie A.

Ayo 3-Times says: We all wish him good luck in his future endeavour. The lad wasn't good enough for gunner.bye bye Denis

How I wish Denilson left sooner rather than later, before wenger changes up his mind. if he`s not given OK I propose Denilson to BOYCOT training may be he may be left looooooooose. Bravo Denilson, BON VOYAGE. Thats GOOOOOOOOD, SWEEEEET NEWS I HAVE EVER HEARD FOR THE WHOLE PAST WEEK.

With all the comments about deadwood,it's time to take a breather.What about the biggest
deadwood,Wenger himself?
I know he is operating on a shoestring budget ,but what about the fees collected from Henry/Ade/Toure and others. And don't forget Arsenl are rated the third richest club world wide.
Wenger used to talk about financial doping. If he aint going to spend on quality players,who will cost more,he shd not expect others to follow his stingy ways.
If the coming season ends in the gunners being unable to challenge due to Wengers cheap imports,he will have to be among the deadwood that should not be in the ES.

Many changes to the playing staff are required this off season.

To do this requires much time and effort. And Arsenal is notorious for its long and ponderous transfer negotiations.

This summer, there can be no excuses. I don't want to hear that we ran out of time because we were trying offload someone and that took a lot of time. Or we were pursuing a player and it fell through.

We need several people on the case, working on different transfers simultaneously. None of this focusing all our eggs in one basket till completion before moving on to the next.