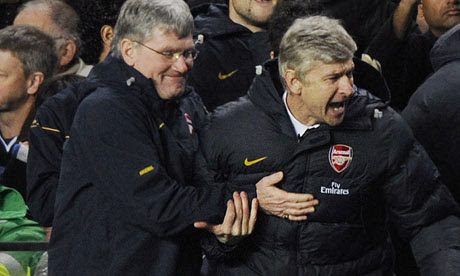 Firstly happy 60th birthday Monsieur Wenger, thank you for the expert management over the years and hopefully we can squeeze a few more out of him before he decide sto call it a day. The club has been transformed since Arsene took charge, we have a new stadium, a new training ground and a new ethos. Football in England has also been revolutionised since Arsene arrived at these shores.

It was Arsenal Holdings' 8th AGM today, Arsene addressed the shareholders in the Woolwich suite in the Emirates complex today. Arsene is happy we are on the correct path and is keen to ensure that the 'Arsenal way' of doing things is maintained in the future. Talk continues about Stan Kroenke's plans given how close his percentage stake is to the level at which he is obliged to launch an official takeover bid. Better the devil you know I say.

Personally I am astonished that people still doubt Arsene's ability and think he has to win something this season. The BBC have an interesting program on this topic tonight with David Dein talking of just how much Arsene has brought to AFC. Emmanuel Petit has made some rather foolish comments in my opinion, it is not surprising that Arsene has not been sacked after five trophy free years, he has consistently delivered and with a bit of luck a league title or champions league title would have been his in the last few years. 2007-8 saw us go so close to the league title, arguably without some rather dodgy refereeing it would have been our year, the 2006 champions league final could have gone either way as well.

Any doubters in Arsene's ability would do well to have a quick glance at Rafa Benitez and Liverpool. It is not long since their second placed finish in the league but a run of defeats sees Rafa put under massive pressure to deliver. Contrast Arsene's performance to Benitez and there is only one winner. Arsene has spent minimal amounts compared to Benitez, yet our squad looks so much stronger in depth than Liverpool's, our football excites and our club is in a strong financial position, while we have top quality youth talent appearing from every crack. Liverpool have frittered away millions on dross and their level of debt is huge. Only a fool would criticise Arsene's record.

We have an incredible stadium, a strong squad, a fantastic youth setup with an abundance of talent emerging and a great manager at the helm. We should be positive about the future. I know we do have our problems which include our defensive frailty and a slight lack of experience, but overall we are in a strong position to do something this season. Against Alkmaar we had Bendtner, Eduardo, Nasri, Denilson, Walcott and Rosickyall out of action, yet we were still able to field a very strong attacking line up. Eduardo is back for the weekend, Nasri is expected back soon, as are Bendtner and Rosicky, the attacking talent is not in short supply.

Finally people should be very careful for what they wish for on Arsene's 60th birthday, often you only appreciate what you had when it has gone, and by then it is invariably too late to get it back. Keep up the good work Arsene.
Posted by 1979gooner at 16:40

Absolutely spot on 1979. Wenger is the best manager in recent history. Not only are his achievements meteoric, but he is humble and reasonable with it.

His speech to the shareholders almost brings tears to the eyes.

I posted at the beginning of last season that the team was not good enough.

Well, this team is good enough and I have no doubt we will be there in the mix at the end of the year.

Let's not jump the gun too much here. The team is doing better than we expected, but we have The November effect to deal with, Song going to the ACN, more injuries and refs always being cunts to us.

We have played well and there is a lot of belief. But that can change quickly (ask a certain Fat Spanish Waiter) so let's not count the chickens before when eggs are but calcified-embryo twinkles in their parents eyes.

No. Its not doing better than expected. Its doing exactly how i expected.

This is a good team. Not perfect. But good enough to challenge this year. Whether they will win anything is a different matter. I think they probably will, but its not a disaster if they don't. For instance, coming 2nd in the league and losing the champs league final would be heartbreaking, but objectively a good season.

And anyone who disagrees is wrong.

Great blog. Like a lot of gooners I have my criticisms of Wenger but anyone wishing his departure is just flat out wrong. Apart from Chapman, he's the best thing that's ever happened to our club.

holding midfielder please.
its so effing obvious.
and who will replace song?