Gary Lineker is a weak coward who cannot bear to apologise 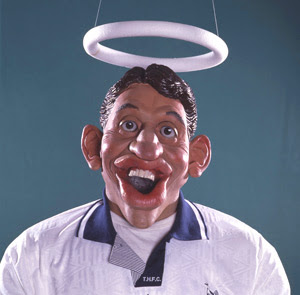 Firstly I would just like to keep this all in an appropriate context, Gary Lineker's pathetic attempts at mocking Arsene Wenger are not a massive deal, but they are certainly something that should not be ignored and for this reason I just want to ramble on briefly about the aftermath of Lineker's foolish outburst.

There was no doubt Lineker's actions were a tasteless and poorly executed joke at best, at worst they were a rather unpleasant piece of small minded bullying tinged with a bit of xenophobia, you can make up your own minds.  There is also no doubt that no other manager has been targeted like that in the past on a serious sports program, it would be a different thing entirely on a satirical show or a comedy program.  The point is that people like Lineker have to be seen to be vaguely impartial and objective, the BBC is funded by us, the tax payer, and has responsibilities that come with being a public sector broadcaster.

The Mail quite rightly followed this story and it was interesting that Lineker was largely condemned by most fans, whether Arsenal fans or not.  John Cross was quite right with his excellent Mirror piece, correctly pointing out that Lineker's joke has back fired and that it bordered on xenophobia.  In fact the worst thing about the BBC's coverage was largely ignored by the media, Arsene Wenger took a lot of racist abuse from Stoke fans last weekend being called a 'french ****' and the BBC chose to portray the Stoke fans as having a great sense of humour, hardly glowing objective coverage on their part.

Gary Lineker has felt the need to come out to speak on the matter and has again failed to cover himself in glory.  He has failed to apologise, merely stating that he would never intend to offend Arsene Wenger, a bit of a Shawcross defence really, intent doesn't really matter, it's the offensive end product that counts in my opinion.  Gary would have done much better to come out and say sorry, by not apologising he just makes himself look like a small cowardly weasel.  The BBC have handled this whole affair very very badly, a quick apology would have killed the whole thing, instead they have defended the indefensible and covered themselves in shame.

Apparently it is just a few Arsenal fans being angry with Gary because he played for Tottenham!  Frankly I don't care who you played for Gary, I just think your behaviour was utterly pathetic and not fitting for a BBC sports presenter.  Mind you compared to Robbie Savage's mere presence, it wasn't that offensive in the grand scheme of things, how the BBC's standards are slipping!  Apparently this is all now 'boring' to Gary, well maybe he should have considered this before his tasteless outburst?  Why not just own up to your mistake and apologise?  Only a proper man would do this though.
Posted by 1979gooner at 18:51

Imagine the stink if he had mocked Harry Redknapp by twitching or Roy Hodgson by lisping? Lineker is just pathetic and his impersonation of Wenger was poorly executed as well.

Seriously you are pathetic, I am an Arsenal fan and found it quite funny and I highly doubt Arsene was offended by it, get over it and get a decent job you dull pratt. It's people like you who will destroy the fun aspect of football if a group of you ever got charge. Lighten up.

I would say it is pathetic to think it is acceptable for a manager to be mocked on a serious sports program on national television.

Mind you, the fact that you have to sink to personal insults says it all really!

Aggressive just because I don't agree with your opinion, sad.

Matt L.... Why is the writer of this a "dull Pratt" .... Surely the pratt is someone who reads something that he is free to ignore then feel the need to insult the writer ( whoever that be)... Either way, you are as opinionated as this dull Pratt and felt the need to air that so wind your neck in a do one you sad little man.

The worst aspect of it all for me was Lineker's ignoring, for the second year in a row, the Neanderthal Stoke supporters' filthy booing of Aaron Ramsey. What exactly is Lineker, a cockroach or a slug? I can't decide. Please help me.

It wasn't funny. If it was eg 'I didn't see it' or similar then fine.

the stoke player when down like a sack of shit under, the ref gave a foul, wenger was pissed off. What is happening to football. What was funny was the fact the player who dived was english. What is funny is wigan were time waisting from 10 minutes. I don't see how you can call Lineker xenaphobic, and to be honest wenger should try to keep his calm on the sideline.

If Lineker had waved his arms about a bit then it would have been funny.

However, the tone of his voice and the look in the eyes shows nothing but hate. Pretty impressive for the BBC's top football host to come across as less funny and most hate-filled than the Stoke fans.

Guarantee this is one of those Stoke supporters who were all over this page after the game just pretending to be a Gooner. Nice try but you're still lame.

For me the insult/joke towards Wenger was not the key issue. It was the fact that Lineker saw this as something to concentrate on when, if MotD was a serious programme it would have spent that time calling for the authorities tio take action against Stoke for the behaviour of their fans towards Ramsey.

It now seems to have degenerated into slagging off Arsenal fans who now can't take a "joke". Yet again the point is missed. And people wonder why we think the media and FA are against us........

Used to be my favourite player during his Everton days. Nowadays he looks like a slimy weasel. Sucks man!

What apology can one get from an INSANE GUY???????

When I complained last week this was the BBC response, make your own minds up

Thank you for contacting us about the edition of ‘Match of the Day’ broadcast on Saturday 28 April.

Gary Lineker's closing line was a light-hearted reference to shots of Stoke fans behind the dugouts imitating Arsene Wenger's mannerisms. A clear differentiation was made between this and the booing of Aaron Ramsey which Gary Lineker and Alan Hansen strongly condemned.

In addition, Gary was not being xenophobic nor was he unfairly singling out a manager who has the admiration and respect of the whole ‘Match of the Day’ team and who has been the subject of praise on the show on many occasions.

Shots of football managers and their behaviour on the touchline have long been a source of good-natured humour across our output and elsewhere. However, we are sorry if we have inadvertently offended you.

I’d like to assure you I've registered your complaint on our audience log. This is an internal report of audience feedback which we compile daily and is available for viewing by all our staff. This includes all programme makers and presenters, along with our senior management. It ensures that your points, along with all other comments we receive, are considered across the BBC.

Thanks again for taking the time to contact us.

the worse thing is wenger being the better man will still turn up to every press conference and every post match interview and give every journalist and interviewer time to answer their questions in a fair friendly manner, shame this cant be said for other managers...

just read Lineker's defence in the John Cross piece. So I'm just offended because he is an ex Spurs player?
add 'patronising' to his list of character weaknesses.

You say Linekers attempts at mocking Wenger is no big deal......so why write a statement about it?

We should push Lickniker button until he made a very bad slur that would get him a sack, that would be great.

All good,when I see his drug addict son he's gonna have bigger ears than his Dad!

Why are you lot crying about this, perfectic I will try fetch you guys some tissues tomorrow.

You should be focusing on 3rd place

Well to be honest you should all get a sense of humour and grow the hell up,including Mr Winger,oh I mean Wenger.

Firstly Ramsey was booed yes and so were all the other players. But why was he booed? Because he wouldn’t accept Shawcross' heartfelt apology, he played up to the fact that he thought it was deliberate, which any fare minded individual watching the incident would disagree with, he revelled in the fact that Ryan's name was dragged through the mud while all the time knowing he could have stopped the nonsense at any time simply by acknowledging and accepting his apology, that's why he was booed. Also it was only after the anti Shawcross chants, followed by Ramsey giving his fans the thumbs up and encouraged them to carry on the Stoke fans started booing- did any of the media mention that? NOT A CHANCE Oh surprise!!!!!!
Wenger was quick to call the Stoke fans Hateful, too idiotic to realise that he has actually brought this on himself. The treatment they receive every time we play them is a reaction to the HATEFUL words and actions we have had to endure. YES that’s right HATE FILLED rants. The first time he lost to us that is what we have had to put up with, and hasn't shut up since; He expects teams to just roll over and become all meek and compliant when his side visits, and the same from the crowd. This however isn't the Emirates, this is THE BRITANIA we have a voice, and we know how to use it, we have passion, and we know how to express it, especially when we're under attack.

He tried to act the same with Kenny Dalglish, well Mr Dalglish isn’t as polite as Mr Pulis and Wenger was very abruptly put in his place.

I think Mr Wenger should take a long look in the mirror and see if he is happy with the reflection he sees there, a hypocrite, a liar and a cheat.
He wasn’t crying out or condemning the vile chants and boos directed at Shawcross,
Or the It should’ve been you taunts directed at Adebayor, and I am sure if you looked at every game Arsenal have played you would find more of the same.

Why is Mr lineker in charge of Motd ? and why on so much money ? Jobsworth comes to mind ,
Perhaps he should look after his family ,so damaged by the unsavory divorce . .......A sports man making millions out of junk food .