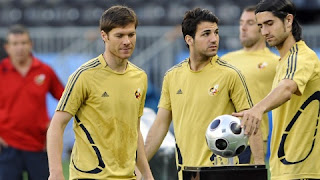 FIFA's Pointless Cup(TM), what a steaming pile of poo it is, not only is Cesc not getting a nice summer off to relax and get ready for a very long and hard season ahead, but he has now been injured by the immensely overrated Xabi 'I'm a big headed tosser' Alonso. It's just such a waste of everyone's time to be playing such a meaningless competition this summer, the only winner is FIFA thanks to the money generated for their coffers.

Fortunately it is not the same knee which kept Cesc out for several months with a medial ligament injury, however the full extent of the cretinous Alonso's footwork is not yet known. Fabregas left the field shaking his head and according to sources close to the star was known to be thinking 'what an overrated sideways passing twat that Alonso is, not very good at tackling either, in fact he's not much good at anything other than being an offensive c*nt'.

As you may have guessed I'm not a big fan of Alonso, so I shall bore you by explaining why. Firstly he has a history of injuring people with his shabby tackling, and these have not been bad luck, many of these so called 'mistimed' tackles look rather vindictive on second viewing. Secondly he is vastly over rated and is continually linked with a move to Arsenal, I damn well hope he never signs for us as he is slow, poor defensively and an utter c*nt. Mascherano is the man at Liverpool, take away Mascherano and you take away their midfield solidity, take away Alonso and it's like removing one Chinese peasant from the fields.

ps onto another average midfielder that we've been linked to this morning, Thomas Hitzelsperger, another baseless rumour I'm sure. He is one paced and does not have the quality to improve our eleven. The scousers are out in force this morning, already defending the mighty Xabi as 'class' in their truly nasal fashion. Given how amazing Alonso is, I find it very strange that they don't miss him when he's out but when Mascherano is out their midfield dissolves like butter. Alonso isn't that bad by any means, however a defensive midfielder the man is not, and we need another technical ball player like a bloody hole in the head.
Posted by 1979gooner at 23:19

Utter rubbish! Alonso is a gentleman on and off the pitch and would never want to intentionally hurt a fellow pro let alone his friend cesc. Do not worry alonso wouldnt be interested in taking a step down anyway. Ask any reds fan and they will tell you how great xabi is to the team. good luck with diaby and song instead!

What a completely stupid article.

Just because you dont like the guy, doesnt mean you can base that on how good a player he is.

Alonso last year was the most fouled player, where the fouls resulted in a red card. Alonso is a class, and yes it is annoying if Cesc is injured but don't blame it on Alonso, especially considering that they are good friends.

thanks for the comments.

i am speaking as an arsenal fan and part of my frustration is the way in which alonso is labelled as a holding player when he cannot defend.

arsenal need alonso like a hole in the head.

by the way mascherano is the key man at liverpool, alonso is immensely average in comparison.

Absolute shite. Alonso is a gentleman AND friends with Fabregas. Fabregas got injured while training, of course he'll be angry. Who has ever said Alonso is a holding player?! He is a deep lying playmaker. A phenomenal passer, lots of experience, works EXTREMELY hard and is a vital part of the Spanish team. We need/needed him because our central midfield is weak and we lack creativity in the middle when Cesc is injured. We need quality like him in the middle of the park. Of course the morons at Madrid, Liverpool, Spain and Wenger himself don't realise he's actually rubbish and passes sideways!

we really need more technical ball players at the club,

the fact that our squad is full of excellent ball players and we barely have a midfielder that can break up play and defend should be ringing bells,

we do not need alonso, it's obvious

I like Alonso. I think he's a decent player. But I DO NOT think he is required at Arsenal.

Like 1979 has said, we need a midfield enforcer/destroyer that will break up play and do a bit of the nasty work when required. We need that player to have some character, leadership and intelligence.

I don't want another nice guy. I'm not looking for a tosser like Diouf though. But I want a player who will give the rough stuff back when teams like Bolton come to kick seven shades out of us. Someone who can mix it up in a fair manner and won't back down to intimidation tactics. And most of all, I want a winner that you can count on when the chips are down to drive the team forward and battle for the result.

Alonso is a useful player, but he's not the player described above, so I will pass.

Absolutely. God knows why Wenger was chasing him or why Cesc said he would be just what Arsenal need.

We COULD have TWO world class central midfilders and a ball winning holding midfielder at Arsenal, most other clubs seem to cope with that. Crikey we even used to manage that.
Of course most other clubs are managed by idiots who don't realise Alonso just runs around injuring players and passing sideways.

Interestingly Denilson's stats were better than Alonso's last season. He's also much younger and has much more potential for improvement.

Alonso is the hole in the head we don't need.

Denilson had a great season. We still faltered when it mattered and he was exhausted by the end of the season. If we are not going to invest in creativity in the middle then let's hope 1) Cesc has a great season. 2) Doesn't get injured. 3) Either Nasri or Arshavin can play as an attacking midfielder when required.

Don't forget, as well as Cesc, Nasri and Denilson, we have people like Aaron Ramsey who are developing nicely in the background.

We simply do not need a player like Alonso even if one assumes he's great at what he does, something I don't.

Ramsey is what 17? Denilson 21? Cesc 22? Cesc has repeatedly said how important Viera was to him when he first came to the club. Denilson describs Gilberto as a father figure in practically every interview he does. The same goes for Walcott regarding Henry. If we don't need experienced midfielders then what do we need?! If we go through any extended period of time when were relying on Ramsey or someone else to make the difference don't be surprised by the result.

Yes Blakey, they are young.

However we do not need to buy a technical ball player, we already have cesc.

We need someone who can defend, who can get in and amongst it, and who can add some steel to our midfield.

Alonso has the age and that's about it, he is most definitely not what we need in my eyes.

I 100% agree about Alonso. He is the new Jamie Rednapp. Yes - he looks a "classy" player, but then they are 6 to a dozen in the Premierleague. Perhaps we should re-sign David Bentley as well?

If we did not already have Cesc, Arshavin, Nasri, Denilson etc in the squad, then I might think about Alonso. But I simply don't see how a midfield of Alonso and Cesc would work. Opposition teams would cut us to ribbons and we would never get the ball back.

People have described Alonso above as a "deep lying playmaker". Well thats also Cesc's best position as the attempt to push him forwards last season was mostly disastrous.

You cannot simply have a team of identikit clones, all wanting to be the playmaker in the middle.

I never said we should buy Alonso, however we are going to need an experienced creative midfielder as well as an enforcer otherwise we are going to be entirely dependent on Cesc playing every game, staying injury free and having a great season. I can't see Nasri or Arshavin performing this role.

We have cesc who is our playmaker.

If we sign one combative enforcer, then we have this new guy and Song, making two excellent solid defensive players.

We then have Denilson and Ramsey as back up.

It should also be remembered that Nasri can play centrally in this role.

We also have some oustanding kids coming through beneath these guys.

There is no need for another technical ball player in our midfield.

We may not need one but I think it is a gamble and a big one at that. We've lacked depth in this area and so we will need a player to step up and play in this position for parts of next season. I'm not confident of Nasri, Denilson or Ramsey doing this but I sincerely hope I'm wrong.
So let's disagree.
Interesting that nobody has even mentioned Diaby's name...

Indeed. Subconsciously I think we all know we can't rely on Diaby.

ricardo
I like this blogs article its very funny