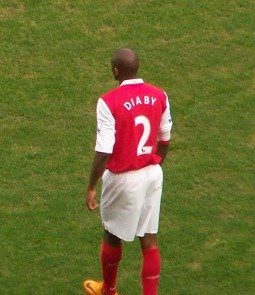 It has been bugging me for a while - which of our talented youngsters is going to be the next one to step up?

This season has belonged to Flamini and Adebayor and to the continued emergence of Fabregas as one of the most talented midfielders in the world. Clichy and Sagna have been exceptional at full back. However, given that it is unlikely that Wenger will ever seriously splash the cash we are therefore reliant on our youngsters stepping up a level. Who will be next?

Diaby - has all the attributes to be the next Vieira and started well by showing JT his boot but does he have the determination? Too often he gives the ball away and then seems less than fussed to get it back. The contrast with Flamini is stark. Verdict - does not have the desire and will end up at Birmingham.

Denilson - highly talented and had a promising season 2006/7. Has been very unlucky with injuries and needs an injury free season to re-establish himself. But does he have the talent to be a regular first XI player? Verdict - the jury is out.

Hoyte - we would all love Justin to make it at Arsenal. He clearly loves the club and is a true homegrown player. He is not talented enough though. He is Premiership quality but not Arsenal quality. A real shame. Verdict - lower half of the Premiership.

Traore - he follows a long line of excellent left backs: Sansom, Winterburn, Silvinho, Cole and Clichy. Like Diaby he has all the attributes. He looks very rough around the edges but deserves another season of learning from Clichy. Verdict - too early to tell.

Djourou - my biggest disappointment of the season. I thought he would go to Birmingham and show us what we were missing. Now firmly behind Big Phil in the pecking order. Has the talent and the physique to make it at the highest level but needs some of Flamini's attitude. Verdict - too talented not to get another chance but needs to improve fast if he wants to remain a Gunner.

Walcott - a favourite of the fans and has shown huge talent in a few appearances. Clearly has the talent and appears to be improving fast. Goals against Birmingham, and particularly the second, shows that he has what it takes. The next task is to do it consistently. Verdict - seems destined to become an Arsenal regular. Season 2008/9 could be the making of him.

Song - has continued to develop and received rave reviews from the African Nations Cup. Verdict - worth another look.

Eboue - up and down season. Injuries, suspensions, bad fouls and glimpses of brilliance. He divides the fans. Undoubtedly he has the pace and technique but he often fails to track back and has been saved too often by Sagna's brilliance. Verdict - surely it is Walcott's time?

Bendtner - has the talent and knows it. Spat with Adebayor aside he has had a decent season and scored some vital goals. Good in the air but also with excellent touch. Needs to curb his arrogance and learn from the players around him. Verdict - could be the real deal if he continues to develop.

The question remains: will enough of these guys make it or will Arsene's faith be left unrepaid?
Posted by K man at 10:24

That must have hurt you on two counts though;
1.) Giving credit to Ade - you've been the most vocal (not that hard)of all the Adey-haters at the Emorates for a while, so well done for the admission in public.
2.) Equally, no one placed higher hopes on Djourou's shoulders. He has been toss. Still, he does have a great "physique"!!!!!!1

I have to say that, amazingly, I agree with you on all the players.

Djorou has been such a dissappointment as he showed so much talent early on, he appears to have the wrong mentality though.

I think that's something that comes through from looking at these young players, invariably they have ability, but the ones with the mental strength and drive will be the ones to be the big players.

Eboue is the classic example, a lot of ability but a tool.

I love Walcott's attitude, never moans, always keen to learn and puts so much effort in.

I suspect Traore has the wrong mentality too. Diaby clearly does.

It is below these guys that it will be interesting to see who emerges. Barazite may be the next to come a knocking.

I was cringing, watching Eboue during the Chelsea match - sure he was going to get a red. He just doesn't have the necessary discipline and he makes me nervous. Same goes for Diaby.

Walcott's rush down the flank, while fighting to stay on his feet, and perfect pass to Van Persie near the end of the Bolton match was pure class. I think he's arrived.

Can't figure Bendtner out - he's got to get over himself before he can break through on this team. He probably deserved the bitch slap by Ade but he's another one who can be moody.

Flamini stands alone at the moment but I'd hand it to Walcott if he continues to improve...