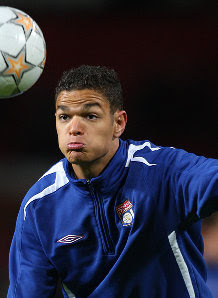 1979gooner has summed up the match last night very well so I won't spend too long on that. My view was that Liverpool had the luck over the two legs and you need some luck to win the Champions League. We played very well and some of the players that regularly take a knocking on this blog actually deserve some praise. Diaby worked very hard, passed well and scored a good goal - if only he could keep up some consistency, he clearly has the talent. Eboue has been much maligned by us Arsenal fans this season but had a solid game, particularly in the first half - he even tracked back to help out Toure on several occasions.

We all hope that we can go to Old Trafford and get a win this weekend but realistically our season is now over. The question I would like to pose is, if Wenger had his time again, would he have done anything different this season?

1. 4-5-1 - Wenger has clearly taken more of a shine to this formation this season. Undoubtedly it worked well for us in the Champions League run of 2006 but that was in a very different team that relied on the pace of Henry and Reyes. I don't think it has suited us that well this season. Granted it can work well when away from home e.g. Milan, but to play this formation at home in the Premiership? I think it is too cautious. At home we should be a 4-4-2 team.

2. Old Trafford - should we have put out such a weak side against Man Poo and the Scum in the FA Cup and Carling Cup.? Those defeats knocked our confidence badly and we have only played well in fits and starts since those defeats. However, Wenger clearly felt that some of our players needed a rest.

3. January transfer window - should Wenger have bought one or two players to freshen a squad that is much smaller than our rivals and had injuries to a couple of key players? I know many authors on this blog have disagreed but I do think Woodgate might have been a good signing - he is a better defender than Senderos and would surely have done better at Anfield last night. It is all very well having confidence in your players but an extra signing might have actually given the squad a confidence boost.

4. Walcott - surely after his extraordinary run last night and several other eye catching cameos over recent weeks we must question why Theo hasn't had more of a chance. This is particularly so when we have missed RVP for most of the season and Eboue has produced next to nothing in terms of goals and assists.

I am one of Wenger's biggest fans and I hate those who now question his position. He is the man to take us forward for years to come. What I do think is that he must accept that he may have made a few mistakes this season. Those mistakes probably may not have cost us the title but they may have made a difference. Will he learn from them? I expect so. Incidentally the rumours linking us to Ben Arfa are becoming more and more widespread. Wenger has gone on record as saying he is a player that interests him. I think he would be an excellent signing - he has pace, a good left foot and is a typical Arsenal player - comfortable on the ball with good movement.

I leave you with the excellent new chant: "Adebayor's, Adebayor's, Gerard's baby is Adebayor's" - it's the only thing giving me any consolation this morning.
Posted by K man at 10:29

My opinion on this is:

Jan - no good players available to bring in and we could not have predicted Eduardo's sad injury.

Do we really want Arsenal to start spashing the cash left right and centre on big earning signings?

Or would we prefer to see one or two high quality additions, while allowing these young players to continue to grow together?

Do we really want to spend, spend, spend and just become another club like Chelsea and Liverpool?

Or do we want Arsenal to represent something different in the modern game, a long termist strategy that invests faith in young talent?

I have faith, this side can become a great side, we forget how close we were to greatness this season.

One or two quality additions to the squad, a bit of luck next year, and it may very well be our year.

I would prefer not to play 4-5-1 but our injuries mean that Wenger has hadlittle choice. The only recognised striker we have to play alongside Ade was Bendtner, who is not ready on any view this season, and I have doubts over long term.

Buying more sicknote players like Woodgate is a mugs game.

Our defending has been poor as a unit and I don't lay the blame at Senderos' feet. In fact, I think you can make a case that both Toure and Gallas are guilty of mistakes, especially in the air.

That's not quite right - there have been several games this season at home where Wenger has played Eduardo or RVP wide left and Ade alone up front - it doesn't work! Theo has also been left on the bench on numerous occasions behind Diably and Eboue. Surely he can also play up front?

So if you think Gallas and Toure are suspect in the air why didn't we buy a defender who can actually deal with the physical stuff??? We've known this for ages and poor old Big Phil is just not up to it against the likes of Drogba and Torres.

I agree with you on 4-5-1 at home, it has been useless in this regard especially against some of the weaker sides.

It does have a role, especially away from home, against some of the stronger sides.

As I said earlier, we want a defender who's quick, strong, better than big Phil on the ground but as good in the air.

That'll be Carvalho or Ferdinand then?

There simply aren't many players around better than Toure/Gallas/Senderos.

Another problem is that with Fab and Flamini in midfield we are not the biggest side, making it harder to play Toure and Gallas together.

The first goal was more a collective problem as no one challenged for the header, while the Torres goal was poor from Phil, but Torres isn't a bad player.

The jury's still out and practically I suggest we continue with what we've got, unless there is someone better to bring in.

Unless you have any bright ideas of outstanding centre backs wanting to come to the Emirates?