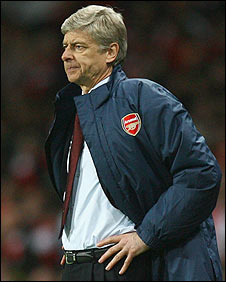 'Frustrating' summed up this evening's game, a slightly erratic performance was stifled partly by a very negative and dire Liverpool side and partly by bad luck in the second half. The teams lined up as predicted here, almost, the only difference from the predicted elevens was that Aurelio was in at left back instead of Riise.

The first half was devoid of incident other than the goals, we really struggled to get going, lacking any width in the midfield with which to stretch the Liverpool back four. Adebayor climbed highest from a corner to nod us one up, but the lead was short lived, Gerrard skipped easily past Eboue and then Toure, before his deflected cross was bundled home by Dirk Kuuyt, one a piece it stayed until half time. The three man Liverpool midfield had been setup by Benitez to cramp our style and it worked for the first forty five, not that Eboue and Hleb really did enough to strecth the game in my opinion.

Theo came on for RVP at half time, with Hleb switching to his favoured position just behind Ade, and this changed the game in a big way. Theo's directness and pace gave Liverpool something to worry about, their defence began to look ragged and an element of panic crept into their game. At the other end Torres was having fun fouling our defenders and throwing himself to ground at the slightest touch. Reina made a great save from a Walcott twenty five yard thunderbolt, then we sculpted two fine chances. Eboue contrived to scuff a sitter tamely from about five yards out, then Bendtner somehow managed to block a goal bound effort on the goal line.

Then the moment that inufriated Arsene, Hleb went on a blistering run beating man after man, he was bearing down on goal and about to pull the trigger, Kuuyt bundled him over from behind, the referee was in a great position but gave no penalty. What a choking bastard.

The game sort of spittled out in the final fifteen minutes, Theo didn't look as effective on the right and our boys looked shattered come the final whistle. Liverpool were extremely fortunate to come away with a draw from a game in which they rarely threatened, and if I'm honest it's pretty embarrassing that's all they can come up with having frittered away so many millions on players. We should also be slightly critical of our failure to take apart this dire Liverpool side, Eboue was our worst player and Hleb did not do enough, we just didn't have the width to dismantle the opposition and I really hope that this is remedied in the summer.

It's not all over by any means, but the task is now slightly uphill. It will not be easy to go away to Anfield and get that precious away goal, but it could be tricky for Liverpool if they go into the game with too defensive a mindset, we may well be able to exploit the underdog tag, here's hoping anyway.
Posted by 1979gooner at 01:28

We'll do em at Anfield. Our away record in the Champs League is second to none (just ask Real, Juve and Milan).

Was a clear pen having seen the replays - ref choked it as he had a good view. Disappointing. We will have to score at Anfield which should force us to attack, which is when we play our best stuff anyway. All to play for - if we can stuff Milan at the San Siro then we can certainly do the scousers.