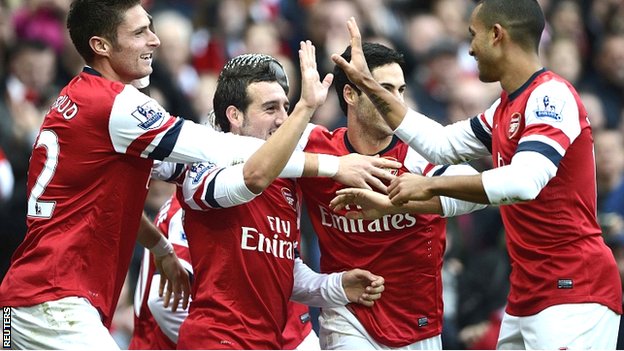 The starting eleven was spot on, Theo wide right to give us that much needed width and pace, Jack Wilshere back in midfield to add to Arteta's guile and Cazorla's craft.  Tottenham did start well and their attacking line up was brave.  It paid dividends when Adebayor tapped home after Szczesny had saved well from Defoe, questions will be asked as to how the Tottenham forward was afforded so much time and space in our box.  Lennon then had a decent chance when Vermaelen stood off him on the edge of the box, the Tottenham winger dragged his shot narrowly wide.

Then the moment which had a massive impact on the game, Emmanuel Adebayor lost it and dived into Santi Cazorla's shin with a reckless straight legged studs up lunge, Howard Webb rightly sent him from the field.  A sweet moment for many Gooners, as Adebayor is one of the most disliked footballers in the modern game and that is saying something.  He is incredibly selfish, hypocritical, lazy and arrogant.  I really do hope he feels ashamed tonight, he is a disgrace in so many ways.

From that moment on we showed Tottenham no mercy.  We pressed them hard and didn't allow them to settle on the ball for a second in the remainder of the first half.  Theo terrorised them down their left, our first coming from a lovely Theo cross, there was still a lot to do with the header and Per obliged, a proper tubthumper.  The second was crucial, coming just before half time, not the cleanest of Podolski strikes, but he hit it early and it found the corner.  Giroud's third just before half time ended the game as a contest, a cracking first time finish leaving Lloris no chance.

Tottenham gave it a go in the second half but they always looked fragile on the counter and so it proved with our neatly worked fourth, a lovely Giroud flick on, Theo played in Podolski who accurately squared for Cazorla, a sublime team goal.  Bale did score a consolation with a good shot with his right foot, he really looks too good for the rest of this Tottenham side, but it merely served to provoke another goal with Oxo rampaging down the right to feed Theo for a thoroughly deserved fifth goal.

Overall a much better display, and the way we attacked so directly and effectively was particularly encouraging.  Giroud leads the line so well and our width on the right was a real catalyst.  Perversely Tottenham looked rather Arsenal-like in their vulnerability at the back to the counter attack.  Still we did concede two goals and there is still much room for improvement defensively.  The captaincy issue is a real problem at the moment as Koscielny is playing well and Gibbs is out best left back, can the captain really warm the bench?  He may have to on form.

There's only one thing wrong with this magnificent win: From now on, when someone asks, "Remember when Arsenal beat Tottenham 5-2?" we'll have to say, "Which time?"

watch 10 minute full highlights of another amazing win against Tottenham...


thierry henry was there!!!