Why RVP simply had to go 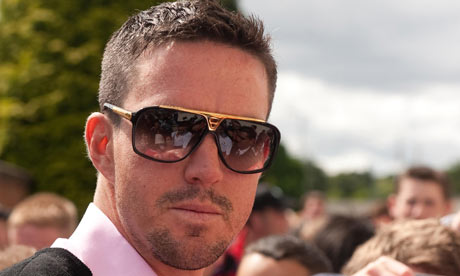 RVP has gone and the speculation as to his reasons for leaving is rife.  In fact a lot of absolute rubbish is being spouted  by a lot of people with rather obvious vested interests.  The photo of Kevin Pietersen is not a mistake, it is there to hint that the team must always come before the individual, and that arrogance can be a great destroyer of team spirit.  I don't think it takes a genius to work out why RVP left and here is my brief analysis from the evidence that is out there.  One key piece of information is RVP's disingenuous and cynical statement from the beginning of July:


"...it has become clear to me that we in many aspects disagree on the way
Arsenal FC should move forward."

The above section is the key to RVP's departure.  The fact that a player felt he should be having such a say on the management of the club had already been made clear to Wenger and Gazidis earlier in the summer, a series of 'outlandish' demands had been made by RVP and his team, from this moment on the club knew full well that  he had to go, the only question was how to go about extracting as much money for his sale as humanly possible.  Amy Lawrence and Arseblogger have described events in more detail.

The bottom line is that RVP strengths are his weaknesses, and no doubt his arrogance has cost him here.  The player who had such an erratic history in terms of injury and form had got carried away with one great season and the captaincy.  He had become so cocky and self important that he felt he should be contributing the club's management, including the finances.  The club could not keep a player who was trying to dictate financial policy to them, he simply had to go.  In fact the club never even offered him a deal of any kind after his ridiculous behaviour at the meeting, RVP had in effect signed his own death warrant at the club.

It is indeed sad that a player who many of us thought has his head screwed on has let himself and the club down so very badly.  As Arseblogger comments today, it is likely he had some very bad advice from his agent and will regret this decision when he is old enough to grow some maturity of thought.  RVP can never become a footballing legend, he could have been this at Arsenal, and all he can be at Manu is just another one of their fickle cohort.

I am sure the same old tired arguments will spew forth from certain corners and certain people with vested interests will try to paint RVP as the innocent party, while trying to blame the club for his departure.  This version of events is nowhere near the truth though, RVP left the club with no choice, his ego had got too carried away after one brilliant season, he felt he was entitled to be player, captain, manager and economist.  No player can be bigger than the club and this is unfortunately what RVP wanted to be.  Arsenal will be bigger and stronger without RVP, we simply cannot afford to have this kind of disruptive arrogance in our midst.  Goodbye Robin, thanks for the memories.
Posted by 1979gooner at 11:03

I really would not bother about whichever bloke has some one-sided comments. Glad this story is over.
ManUre pays 24M (or so), plus likely about 8M in annual wages, let's see end season how many minutes of (non-injured) play are accounted for it.

Great article - one thing I've heard on very good authority is that both Dein and his Dutch agent knew nothing about the blog post and were furious. The situation was untenable from then. A misguided egotist has walked away from a club he loves/loved as a result.

if true, that is amazing, shows how out of control his ego had gone...

Anyone remember a chap by the name of 'Berbatov?' Uncle Fergie paid top dollar for him a few years back and he has since become redundant at Man U - despite still have tremendous class and form. I can see Mr. van Persi following in a similar situation in a year or two's time.

Although RVP certainly is a class act, will he be able to replicate his form in a team where he is not the 'big shot' and that plays a completely different style of footy from what he has become so accustomed? I suppose only time will tell, but I cannot see how the person who has to sign the Man U cheque to 'Gunners Inc.' will be feeling that they have been frugal in this purchase. Is he really worth all that much?

Well done Arsene - take the money and let's move on. Think about it ... how much greater will his regret and our joy be should should we trump Man U this season? Our biggest downfall in years gone by has not been and under-performing striker - it has been consistency. If we can sort that out with the players we currently have in our camp, I truly believe we can do it!

Robin has become rubbish and ruinned his own legacy. He coulen't learn from Adebayor's behavier or was he inflicted by Ade's stamping.

The article is perfectly correct, lets invest the money in some cheap but productiveback ups for some of the areas we still need to strengthen

never read the article, but the answer is 200k a week 4 years contract.i`d do it.money talks especially when our board members are filling their greedy pockets non stop and nothing seem to be enough