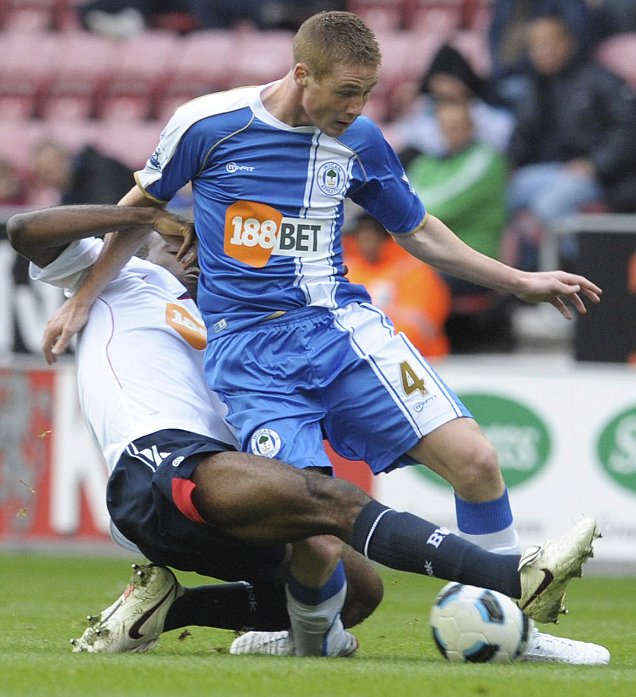 Earlier today I wrote about the way in which Roberto Mancini has been given a rather generous free ride from the media, this has been further emphasised by some Cesc Fabregas comments being completely distorted in a rather disingenuous manner, this is what Cesc actually said:

"I never said we would beat city with 15 men, i said that even if they were 15 players, we´d have still try to go for the victory as usual."
Various news sources have tried to make this appear an arrogant remark, the Telegraph say he is 'boasting' while other sources claimed that this meant Cesc thought that Man City were 'vastly inferior'. It is just another case of the media trying to paint their own picture, as Cesc tweets: "Once again you see that people read things and understand things the way that will work better for them...."

The above picture shows just why tackling from behind is dangerous and so it proved, Wigan's James McCarthy is out for at least two months after this poor tackle by Fabrice Muamba. Wigan manager Roberto Martinez was not happy with the tackle: "It was an unnecessary challenge, it was not malicious but it was reckless".

It wasn't horrendous from Muamba by any means, but Howard Webb didn't even give a free kick. This is a frequent problem, clearly dangerous yellow card tackles are just let go so so routinely. There were several just like Muamba's from Man City players on Sunday, notably from De Jong and Kompany, slides from behind that did not even get free kicks from Clattenberg. Overall referees just do not seem to understand what is dangerous and what is not, most of them have probably never played the game at any level and this is no coincidence.

Michel Platini has again neatly demonstrated what a fool he is with some rather stupid remarks. He thinks that goal line technology will lead to 'Playstation football', well what's wrong with Playstation football? If it means that less obvious errors are made then it can only be a good thing. The moronic Platini calls for greater respect for referees, but why do FIFA and UEFA ignore the call for the use of video technology from referees themselves? Where is their respect for referees with this persistent refusal to bring the game into the 21st century and use technology to reduce error?
Posted by 1979gooner at 16:39

It was so obvious what cesc meant 1st time round, yet he had to re-iterate his comments because, once again, agenda driven, controversy seeking hacks chose to stir up something out of nothing.

It's pretty common for the English press to make us the bad guys. Who cares about them anyway.

participate in our internet poll on the topic: Should video technology be used in football or not?

Please all cast your votes and check out the results at our special website: http://www.videotechnologyinfootball.com and enjoy our video section, showing some of the most controversial moments in recent football history.

PS: Follow the latest news regarding video evidence and goal-line cameras in football on our twitter page: http://www.twitter.com/VTIF