Through and tricky trip to the valleys 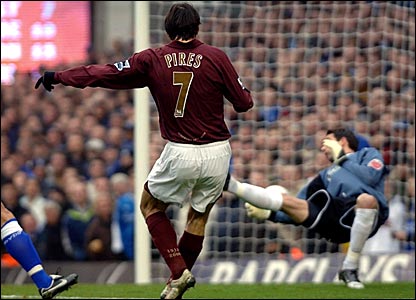 It was a satisfactory performance and result against Plymouth, who did try hard to their credit but never looked like causing an upset, however the same question marks remain. The 4th round sees us travel to Cardiff which is not an easy place to go, especially given the feral nature of their support who must surely be the closest sub-species of football fan to our evolutionary ancestors. At least either the spuds or manure will be exiting the competition at the 4th round stage.

I thought there were definitely areas of promise against Plymouth which certainly would not have been predictable a few months back. For example Nasri seems to be finding a bit of form and a bit more drive, while Diaby is starting to perform at a more consistent level and finally showing some discipline. Ramsey is a great talent and will improve the more he plays, while Carlos Vela looks a great prospect, personally I find it hard to see how Vela didn't start. Gibbs showed some nice touches and is developing well, after he came on for the crocked Silvestre who is out for around 3 weeks.

As always it was not all positive by any means. Bendtner has ability, however is worrying lack of work rate would not be acceptable in an experienced proven club legend, so it's even less acceptable in an arrogant young upstart, especially when he's hardly on his game at the moment. Eboue is simply not the answer at right midfield, maybe switching Nasri to the right and starting Vela on the left would have been the better option. The defense looked comfortable other than the lapse which led to the goal, however we really need to stop leaking goals if we are to climb up that league table.

The boring transfer rumours continue, but in certain areas it is clear that we have the options within the club staring us right in the face, Carlos Vela for example. There are also interesting developments in the reserves, seeing one big player returning from injury and another youngster back from Spain. There's been some typical rumour mongering from Theo Walcott's agents that must have been conveniently fed to the Screws of the World, the low life that are football agents love boring us with this kind of rubbish. Elsewhere it will be interesting to see how Gavin Hoyte gets on at Watford and how Jay Simpson gets on at West Brom. Next up it's Bolton at home, three points are much needed as always.
Posted by 1979gooner at 18:35

The team that was put out did well as Plymouth put everyone behind the ball and packed the box.Ramsey started with a few jitters but that's understandable but that soon cleared and he did very well indeed.Bendtner ,well,how many times has he been given a start and failed to produce.It's not inexperience as he's a international and has played 1st team for a while now.That show's that we really,other than Eduardo, have no back up for strikers.Nasri was great trying to make things happen and we were getting down the wings which was good to see again.Diaby was strong and his runs open up their defence but again there keeper was on-form.When Vela came on he really did cause them problems just needed to pass it at the right time.The defence weren't troubled,djourou(can never spell his name)was very comfortable as he's getting more confidence the more he plays and Sagna another great game as for Gibbs good link up play and never troubled.
Only a bit of ball watching by van persie let them score but otherwise a good performance so on to cardiff and i don't see any problems there!!.
FOREVER ARSENAL
EXILED-GOONER