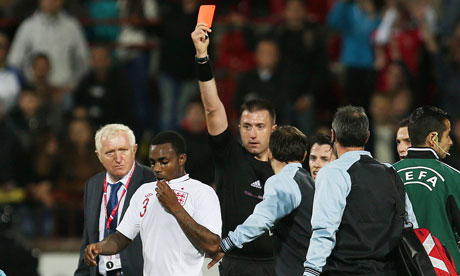 I have largely taken my mind off football for the last few days and the lack of Arsenal games has made it a very stress-free period indeed!  I spent an evening listening all about Lance Armstrong's disgraceful cheating and bullying, the rank corruption within the cycling authorities and how they still have many miles to go before they can claim their sport is even remotely clean.

It also brings up a very interesting point which makes those who write off talk of systemic bias in the Premier League as mad 'conspiracy theories' look like idiots.  When there is a lot of money around in sport, do not underestimate just how bent and corrupt things can become.  Networks of nepotism and corruption grow and thrive, this is life, simply assuming that things are fine when one has a lot of good evidence to the contrary is nothing other than naive.

Oliver Giroud's confidence must be climbing up there after his excellent last minute goal away to Spain, many other Arsenal players have been in action and touch wood, there is no terrible injury news as yet.  I just hope we get a full set of players back for Norwich, it is just the kind of game we need to get three points out of, there is no room for complacency or error.  The other fantastic news is that Jack Wilshere and Bacary Sagna both came through a behind closed doors friendly against Chelsea, again I am touching wood.

Finally onto the most serious issue of all and that is racism.  It is no surprise that racism is rife in certain corners of the globe, both FIFA and UEFA have failed to adequately take on this disgraceful cancer in the game, they both seem intent on punishing other more trivial matters such as Arsene texting people during games.  I suspect the reason UEFA and FIFA are so reluctant to properly punish the racists like Serbia is that the Presidential votes of many countries may be lost if they do show the balls to stand up to racism.

The Serbian FA have behaved just as badly as the significant number of supporters who racially abused Danny Rose in a quite disgraceful and sustained manner last night, they have launched a pathetic attack on Rose, labelling him 'inappropriate and vulgar'.  Words fail me at moments like these, the Serbian FA have truly plumbed new depths with their complete failure to look at their own ugly racist face in the mirror.  No player should have to endure what Danny Rose did, we are all human beings and racism has no place in sport, or in any aspect of modern life.  Shame on the Serbian supporters and the Serbian FA.  Only a ban from all competitions will suffice now.