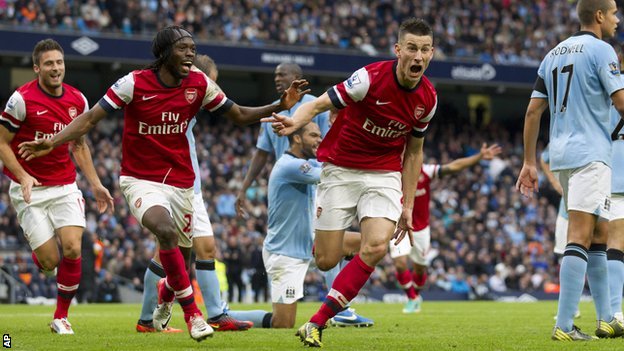 How things have changed over the last year, we have gone from being a talented and disjointed collection of individuals to a well organised team that is very much greater than the sum of its parts.  This was epitomised today with an outstanding performance away to the moneybags PL champions Manchester City.  Of note City's bench cost more than our entire starting eleven, some context if ever it was needed.

No one could deny we deserved the point, and if any team deserved the win it was us, we shaded both halves and were always the better passing team.  City were outplayed in the first half, we overwhelmed them in the midfield and with some better finishing we should have taken the lead, Gervinho particularly culpable with a poor first touch when clean through on goal.

City took the lead against the run of play, some poor communication at the back saw Gibbs concede a needless corner, it was whipped in well but Mannone flapped and Lescott nodded in.  Poor defending all round.  Mannone did then pull off a fantastic save from Dzeko's magnificent 20 yard curler a couple of minutes later though.

City changed tactics in the second half and put an extra man in the midfield, this certainly made them trickier to break down.  We huffed and puffed, Cazorla first tested Hart with a fierce right footed shot which he just managed to divert wide, and then from the resulting corner Kosielny brought the ball down slightly heavily, but he still managed to belt the ball into the roof of the net leaving Hart with absolutely no chance.

The game was not yet over though, there was still time for a magnificent Mannone save and a bad Aguero miss from Koscielny's poor clearance.  Gervinho also could have sealed it, brilliantly bringing the ball under his control but losing his composure at the vital moment, blazing his shot high and wide.

It was another excellent overall team performance, bar that one poor piece of defending of course, but we travelled away to a tough venue and gave a great account of ourselves.  The unsung Per Mertesacker was awesome, his reading of the game sublime, the whole back four player their part too, Cazorla was the hub and a special mention must go to the much maligned Aaron Ramsey who put in an excellent all round shift.

We have come a long long way in the last year, the work ethic in the team is so much better, the organisation Steve Bould is adding is making such a difference, we have got rid of some arrogant disruptive characters too.  Perhaps the one thing that is going to take a little bit more time is for the attacking play to completely gel, our new forwards will need patience to allow them to develop into the team and this won't come overnight.  Great performance and if we can get something out of our game against Chelsea next week then there is no doubt that we are in the title mix this year.

Unsung by the average football fan and in the media.

Those who know have seen him perform very well all last season, however many people chose to knock him without being fair and actually watching him.

Good point though, not unsung by Gooners who watch him play regularly.

Most interceptions: Mertesacker 7 exceptional reading of the game. Just need the Tall Fucking Frencmen to grab a goal, hes leading line well enough. But thought our medium sized german & Gerv should have swoped positions MSG would have scored but was not central enough.