Our lads can put their feet up and enjoy a weekend without a fixture, obviously Monday's game at Wigan is another potentially tricky game, but I look forward to enjoying the two FA Cup semi finals without having to get stressed about an Arsenal game.  Howard Webb is officiating today and Martin Atkinson tomorrow. 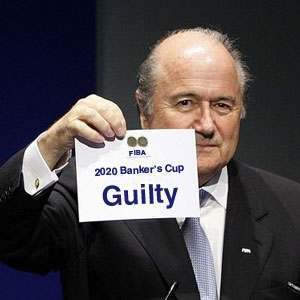 The FA's rank incompetence and lies have been at the top of the news this week and quite rightly so.  The media are at last standing up and taking notice.  Arsene is finally being listened to, and who could disagree with his comments on the bizarre decision not to rescind Derry's red while doing nothing about Balotelli's shocking tackle.  Arsene is keen on video technology, and frankly anyone with a brain is these days:


"I don't think referees are bad. I just think the game is so quick. It is impossible for a human being to see everything no matter how good you are. Out of 100 situations (with instant videos) you would be less wrong than you would be today because you would have help."

It has become clear in recent years that the governance in football is about as corrupt bent as a very bent thing (in the the Blackadder of course).   FIFA, UEFA and the FA are routinely covering themselves in shame in many regards, but the failure of football to embrace video technology has made the world's richest sport a laughing stock, there is no good argument against video technology's introduction, the supporters want it, the referees want it.  In fact the only people who do not want it are Sepp, Michel and chums:  I wonder why?  I couldn't possibly say that it is because they want to be able to influence the outcome of games for their friends, could I?

Sadly it does appear that FIFA, UEFA and our won hapless FA are going to dragged into introducing technology in the kicking and screaming manner, this is so very sad and an indictment on the complete lack of integrity in the game's governing bodies.  Video technology is no utopia but if introduced sensibly then it would reduce error, that is the point, and who can argue with that?

Anyways to finish on the FA Cup, I have a feeling it will be an Everton-Chelsea final.  Form is important because confidence is key, and these two sides are on better form than Tottenham and Liverpool.  Both games will be fairly tight I would imagine, but I think the poor form of Tottenham and Liverpool really counts against them.  Obviously pretty much every neutral in the country will want an Everton FA Cup win this year and who am I disagree?  Come on David Moyes and the Toffees!